Four men have been charged in court with involvement in the shooting of a protected flamingo in Salina Bay in June last year.

Edgar Attard 49 of Naxxar, his son Justin, 25, his cousin Cliff Borg 31 of Mosta and Massimo Parnis 22 of Sta Venera pleaded not guilty to conspiring to commit a crime in breach of hunting regulations.

Justin Attard and Cliff Borg were accused of actually shooting and keeping the bird and keeping protected birds. Both were also accused of being relapsers.

The court was told that a Salina resident had been watching television when a gunshot was heard. He went out on a balcony with his father, and heard a splashing sound which moved closer to where they lived.

They saw a man peering out near a gate on the coast road. A white Pajero (later identified to belong to Justin Attard) was seen being driven up and down the road. The man then got into the car.

The witness called the police.

Blood and a pink feather were later seen on the scene. The colour of the feather was the same as the flamingo the witness said he had seen earlier in the afternoon.

Court expert Marisa Cassar testified that a feather found in the Pajero belonging to Justin Attard and another found near the gate came from the same bird. 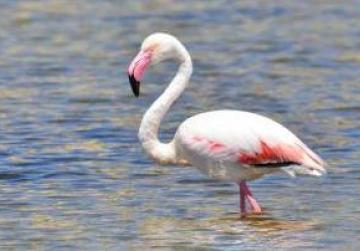 The flamingo that was later shot.

Stanley Gatt, an inspector at the Wild Birds Regulations Unit, testifying as a court-appointed expert, said he had examined traces of feathers found near the Pajero after the vehicle was found abandoned by the police near Wied Annotta. Some feathers were also found near the gate on the coast road. They all came from the same flamingo.

Searches were carried out in the houses of the accused and 11 protected stuffed birds were found, including one which was freshly done. A photo of this bird was also found in the mobile phone belonging to Mr Borg. The setting of the photo was Mr Borg's kitchen.