Four Maltese girls were trafficked in the country for sexual exploitation between 2017 and 2020, according to a United Nations report.

The minors were likely trafficked for prostitution, according to UN researcher Fabrizio Sarrica.

While sexual exploitation can refer to prostitution or sexual slavery, the former is more common in Europe, Sarrica told Times of Malta.

Details of the victims’ cases are not available due to privacy concerns.

The figure is taken from data contributing to the seventh edition of the Global Report on Trafficking of Persons 2022, published by the UN on Tuesday.

From 2017 to 2020, Malta detected 50 victims of human trafficking, of whom 45 have been confirmed. Thirty-eight per cent were Ukrainian nationals and 30 per cent were from East Asia, with the remaining made up of persons coming from other regions.

According to UN data, the main purpose of people trafficking in Malta is for forced labour.

“We don’t have much data for before 2017,” said Sarrica, adding that the lack of available data for 2016 “could be for any reason”.

In addition, the lack of reported victims from 2012 to 2015 could indicate that more efforts had since been made to detect cases, the researcher said.

He also noted that, due to its size, “Malta could be a very good testing ground for new methodologies of detecting people trafficking”. 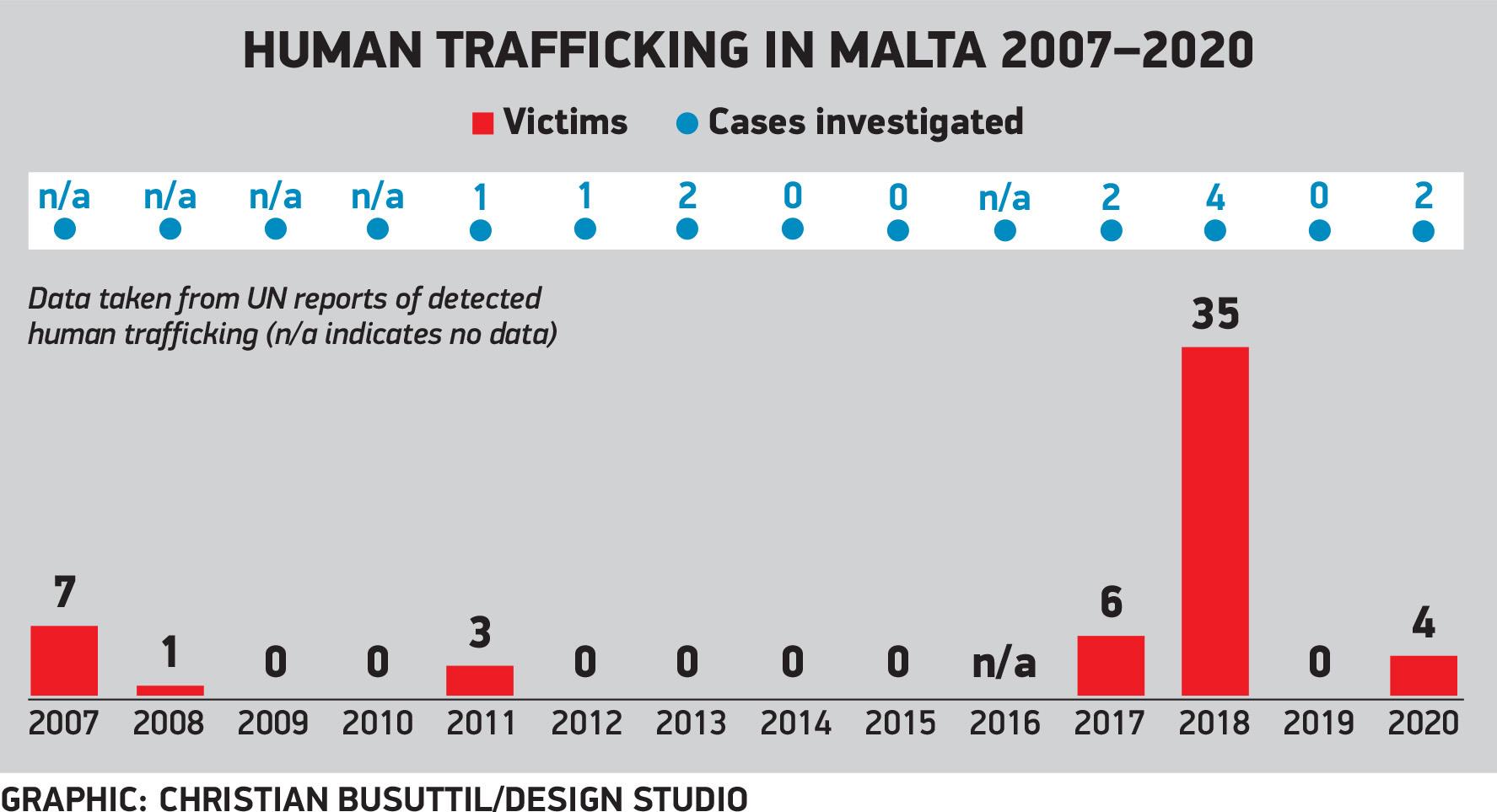 Each year, approximately 3.5 people per 100,000 in the population fall prey to trafficking in the EU and the number of detected victims in Malta is considered to be in line with the European average, according to Sarrica.

Relative to Luxembourg, for example, the number of victims detected in Malta is “basically the same”.

In general, the UN report found that, in 2020, there were drastically fewer victims of trafficking for sexual exploitation identified by the EU authorities, indicating that the COVID-19 pandemic had either contributed to a reduction in trafficking or a decrease in the abilities of states to detect it.

Lockdown may have pushed exploitation underground

One suggested reason for this is that lockdown measures pushed exploitation further underground, making it less easy to detect.

However, while the number of sexual exploitation victims fell, the report notes that victims of trafficking for criminal activity – for example, selling drugs – increased.

A 2021 report by the German federal police also noted a change in sexual exploitation trends, showing a move from streets and brothels to private apartments.

In 2019, an under-age Maltese girl was reported to have fallen victim to sex trafficking according to a report issued by the US State Department.

Earlier this month, two former directors of Leisure Clothing, a now-shuttered clothing factory, were jailed for six years each for their participation in human trafficking dating back to 2014.