I enjoyed Giovanni Bonello’s article in The Sunday Times of Malta of February 10, and its accompanying illustrations, on the very first photographs taken in Malta in 1841, and on Francesco Galea, the first Maltese photographer who preceded Leandro Preziosi (1820-1869) by about 17 years. I was pleased to note that the account he gave tallies with what Antonio Espinosa Rodriguez and myself wrote in the Encyclopedia of Artists with a Malta Connection published in March last year. 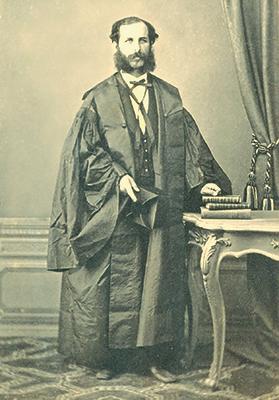 The photo of Dr Salvatore Luigi Pisani taken by Leandro Preziosi on his graduation in medicine and surgery on November 26, 1850.

The main protagonists of the 1841 photographs were the renowned French painter and lithographer Émile Jean Horace Vernet (1789-1863) and his companion Frédéric Auguste-Antoine Goupil-Fesquet (who died in 1878).

Vernet came to Malta for the first time in 1839 when he painted Fort Manoel. On his second visit in 1840 both he and Goupil-Fesquet stayed from March 6 to 29, partly spent in quarantine. He executed at least two paintings, one of which, now hanging at the Union Club, Sliema, shows HMS Barham entering the Grand Harbour.

According to various issues of the contemporary Portofoglio Maltese, Vernet and Fesquet made a demonstration of the Daguerreotype process of photography that had just been invented, by which they produced various pictures, the first ever photographs produced in Malta. The Governor, Lt Gen. Sir Henry Bouverie, and the French consul Dominique Miege, were among those witnessing the aforementioned demonstration.

A certain Miss Wilbraham spent some time in Malta in 1839-1840 during which she made a sketch of the ‘pretty’ St Paul’s Bay. She wrote in her diary, preserved at our National Library, that she visited Vernet in quarantine at Fort Manoel. He was wearing a magnificent Turkish dress and he gave a Daguerreotype demonstration. She met him again at a dinner given by the Governor where he was dressed in a different splendid Turkish costume. These encounters were recorded in the aforementioned encyclopedia of artists. 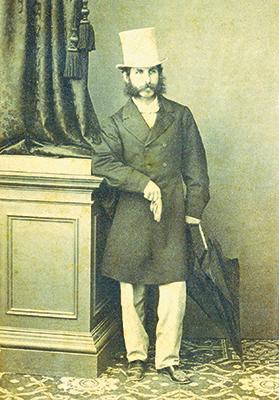 The portrait photo taken by G. Micallef when Pisani entered the University of Malta on October 1, 1844.

Both Vernet and Fesquet were Frenchmen. But the very first photographs in Malta produced by a Maltese was a certain Francesco Galea, who is listed in the said encyclopedia. He invented the first photographic instrument in Malta, and around 1840 he set up an industry of lithography which had been introduced in Malta by Pietro Paolo Caruana (1793-1852), in 1828 or 1829. Galea’s studio was at 40, Strada San Marco, Valletta, and he was given the same address in the electoral register published in The Malta Government Gazette on July 31, 1849.

Besides, there is only one Francesco Galea named in volume 12 of the Giuliana Bartoli in my collection, which covers the marriages celebrated at the parish church of Porto Salvo between February 10, 1810, and November 18, 1834. According to this manuscript document, on September 12, 1824, a Francesco Galea, son of Paolo and Marcella Bonello, married Maria Antonia Farrugia, daughter of Rosario and the late Rosa Brincat. The Status Animarum of the Valletta parishes might provide more information on this pioneer of photography in Malta.

Galea invented the first photographic instrument in Malta, and around 1840 he set up an industry of lithography

One of the illustrations published with Giovanni Bonello’s article shows a watercolour of St George’s Square, Valletta, by Goupil-Fesquet. This must be the original from which a lithograph was made in the early 1840s. The lithograph is signed by the artist Bour, after Fesquet: G. Fesquet pinx[it]. Titled Vue de Malte. Strada Rèal, it was printed in colour by d’Aubert & C.ie and published in 1844 in a book on Vernet’s Voyage en Orient, although there might have been more than one edition. 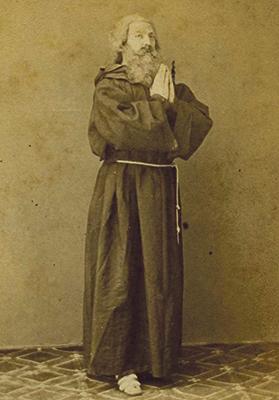 Further light on early photography in Malta emerges from two portraits of Professor Salvatore Luigi Pisani, MD, who graduated in medicine and surgery on November 26, 1850. Louis Borg Manché has kindly passed on to me through Joseph Schirò a copy of a photograph of Dr Pisani taken on the occasion of his graduation.

On the back of the card, beneath the emblem of the Royal Arms, there is the name of Leandro Preziosi as detailed hereunder:

This clearly shows that Preziosi was already active at his photographic studio in 1850, which precedes by eight years the year that has been given by various writers. It is quite possible that Leandro was introduced or recommended to Dr Pisani by a member of his family, ‘Count’ Antonio Preziosi, who graduated MD in 1842.

Another photograph of the young Pisani was taken by a certain G. Micallef with his address as listed hereunder: 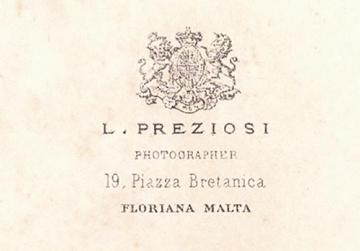 The back of the photo of Dr Pisani taken by Preziosi upon his graduation.

An early photograph by Micallef, though later than the one referred to above, is that of a Franciscan friar kindly supplied by Lindsay Galea, a paper conservator who is a specialist in the conservation of photographs. On the back of the card we find the emblem of the Royal Arms and beneath we discover that G. Micallef had joined forces with E. Borg but retained the same address as listed hereunder: 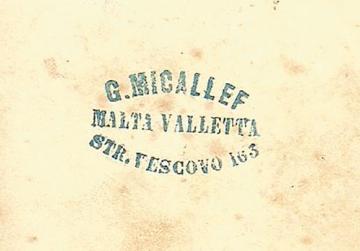 The back of the photo by G. Micallef of Salvatore Luigi Pisani, which must have been taken in late 1844 or early 1845 upon his entry to University.

G. Micallef was probably related to Notary Antonio Micallef, who lived at the same address according to the electoral register of 1849. Perhaps this is a new name in the list of Maltese photographers, one of the very earliest. The portrait of Salvatore Luigi Pisani was taken when he entered the University of Malta on October 1, 1844. This dates Micallef’s photograph to late 1844 or early 1845. 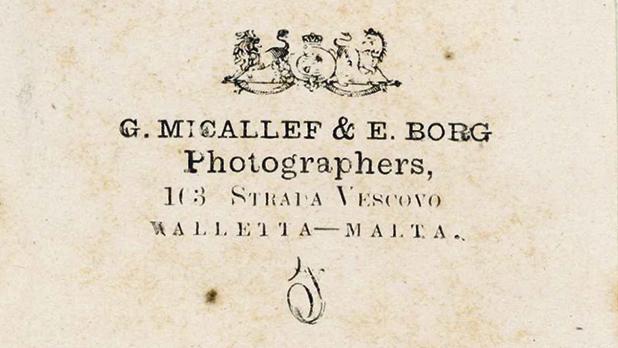 The back of the photo of the Franciscan friar, showing the Royal Arms’ emblem and the studio address of photographers G. Micallef & E. Borg.