The presidents of the rival parliaments in Libya said today that they had made progress in talks held at the Auberge de Castille but they would not be signing a UN-negotiated agreement earmarked for Thursday.

As things stand, the agreement is against the will of the Libyan people, they said.

“We came here to announce to the world that we are able to solve our problems ourselves with the help of the international community, but we will not accept foreign intervention against the will of the Libyan people,” the president of the Tripoli based General National Council, Nouri Abusahmain, said.

The president of the Tobruk based parliament, Aguila Saleh Issa, added that both sides were calling on the international community to consider the progress made today.

“But allow us time to form an effective unity government, acting hastily would lead to more problems in the future,” he said. 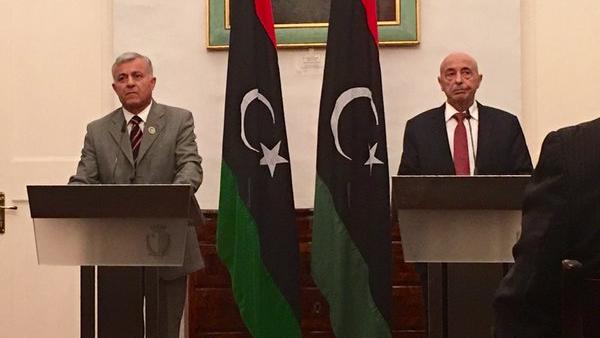 The rival governments, the United Nations and several countries, particularly Italy and the United States, have been seeking agreement for the formation of a unity government which would hopefully restore stability in the North African country.

A similar top-level meeting was attempted in Malta last Saturday but failed when the Tobruk delegation did not turn up. However representatives of the two governments met officials from the UN, Italy, the US and Russia in Rome this week, pushing the process forward.

Foreign Minister George Vella in comments to Times of Malta today cautioned that the Libyan  factions cannot be forced into a peace deal.

The two rival governments in Tripoli and Tobruk have until tomorrow to sign a peace accord and form a national unity government as proposed by the UN. “Both sides know that every minute the agreement is delayed gives Daesh (the Arabic name for Islamic State) the chance to grow in Libya… but we cannot force an agreement down their throats,” Dr Vella said.

It is unclear how officials will convince opponents and armed factions to support a national unity government, which they may reject despite a year-long UN effort.

The process has been dogged by infighting that sees Libya effectively split between the internationally-recognised government exiled in the eastern city of Tobruk and the self-declared government in the capital, Tripoli.

Dr Vella said the situation in Libya was very complex and forcing a national unity government on unwilling parties could complicate matters further.

Dr Vella said despite the high expectations for the Rome conference it produced “another document” stressing the importance of reaching a political solution with some “forceful language” included to add pressure.

“It is anybody’s guess what will happen [by tomorrow]… any agreement reached is just the very beginning, because a unity government will then have to disarm the factions, bring about reconciliation, create the State institutions and ensure it could assert itself on all the territory,” Dr Vella said.

But he was sceptical of a separate deal reached last week between rivals from both sides outside the UN process – referred to as the Libya-to-Libya agreement – insisting the brokers were mainly those who had opposed UN efforts all along.

“The Libya-to-Libya deal has not found all-round backing in Libya and is being viewed as an attempt to undermine the UN process,” Dr Vella said.

A report drawn up for the UN Security Council last month said that Islamic State’s leadership had recognised the situation in Libya as an opportunity to establish a new foothold outside Iraq and Syria.

The report said that IS viewed Libya as a “retreat and operational zone” for fighters unable to reach the Middle East and the “best” opportunity to expand its so-called caliphate.

Libya is the only country outside Iraq and Syria where IS leader Abu Bakr al-Baghdadi has appointed close aides to lead the organisation there.

The report said that around 800 Libyan nationals who fought with IS in Iraq and Syria had started to return and formed the bedrock of the fledgling organisation, which counts not more than 2,000 to 3,000 fighters.

Islamic State first established a foothold in the eastern city of Derna but has since re-grouped in the coastal city of Sirte, halfway between Tripoli and Benghazi.