Forgotten age-old fragments that no one can read have been lying on shelves at the notarial archives in St Christopher Street, Valletta, for decades.

Most were deformed during World War II in the basement of the Auberge d’Italie and then disposed of in different places across the island. 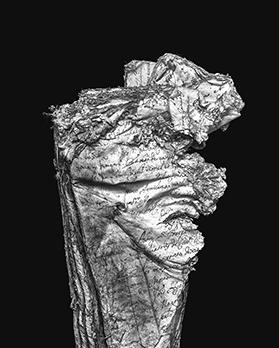 Is it a man’s profile? Photo: Alex Attard

They were only rediscovered recently at the archives in Valletta, with the most tattered of them packed in bags ready to be thrown away, consultant historian for the archives Joan Abela said.

Instead, the fragments, of which it is estimated that there is almost half a kilometre worth of shelving, recently inspired photographer Alex Attard to document them with all their deformities and make them the centrepiece of an exhibition.

They were also documented in the first ever publication focused entirely on the archives, and will live on as artefacts in the new extended premises once refurbishment is completed.

Mr Attard was asked by Dr Abela to come up with something artistic in a bid to reach out to those who might not be interested in the documents for their historical documentation.

Like several people, he had no idea of the existence of these fragments, but when he first looked at the remnants he realised that some actually looked like sculptures in their own right.

The project, illustrated as an exhibition and paired with a publication was themed Parallel Existences because their existence is two-pronged: they not only host information penned by notaries, but they are now art pieces shaped by history itself.

He hopes his photos will instil some curiosity in people who have never heard of the archives, or even encourage students to take up conservation studies. 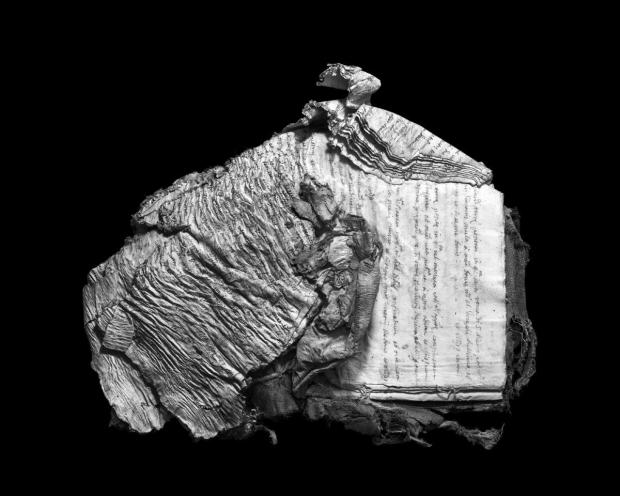 Is it a sculpture of a dog's head or a fragment?

Were there any female pioneers of early photography in Malta?

Women might not have enjoyed any civil rights or work benefits in the 19th century, but historic documents shed light on a leading entrepreneurial role they had in Malta.

The depository of documents, that is the Notarial Archives, has allowed researcher Caroline Tonna to learn more about Adelaide Conroy and Lucrezia Preziosi, two women who saved their husbands’ photography business.

Conroy, whose husband’s health deteriorated rapidly until he died, advertised her services in her own right as early as 1876 – she executed “photographs of every work, from postage stamp to the natural size, always to the full satisfaction of her customers”.

Preziosi, widowed at a young age when her twin boys were just 10, entered into a contract with her late husband’s assistant to continue the business.

She specifically instructed him to refuse to photograph low-ranking servicemen: “The production of glass negatives must remain in favour of moral, respectable people, excluding Navy and Army soldiers and other low status individuals who stand to degrade and discredit the said establishment.”

For Ms Tonna, the documents at the archives are the voice of the people from all strata of life and they cut a wide swath of history of social life over the centuries in Malta.

Read more about her research and other researchers’ discoveries in Parallel Existences, published by Kite Group.