Education Minister Evarist Bartolo this morning accused the CEO of the Foundation for Tomorrow’s Schools, Philip Rizzo, of lying, amid claims that the minister tried to dissuade him from reporting claims of fraud and corruption against his canvasser.

"I've been betrayed. If need be, I'm prepared to sue him," Mr Bartolo told the radio programme Għandi Xi Ngħid.

Mr Bartolo insisted that he alerted the police right away about the reports of fraud and that he had told Mr Rizzo to do likewise with any information he had.

"It’s up to officials like him to report such cases right away... That's one of the reasons why they are paid well," the minister said. 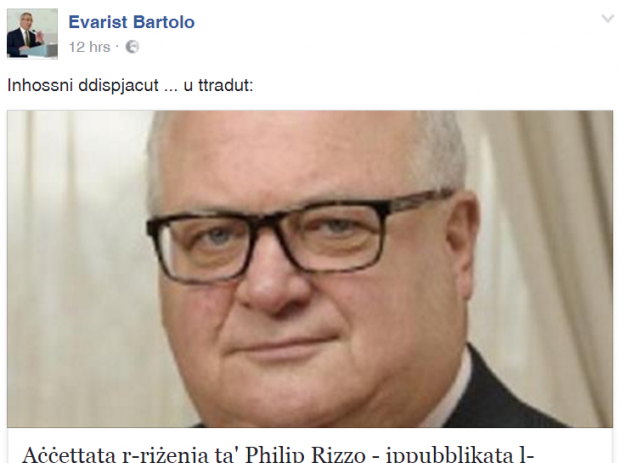 In his damning resignation letter published in the media last night, Mr Rizzo accused Mr Bartolo of not telling the truth, knowing about wrongdoing by his person of trust for a long time and trying to dissuade him from formally reporting that wrongdoing.

Times of Malta is informed that Mr Rizzo’s claims of corruption and fraud by Mr Bartolo’s canvasser, Edward Caruana, have already been passed on to the police and the Permanent Commission against Corruption.

Mr Caruana, a person of trust of Mr Bartolo’s and placed at the FTS following Labour’s return to power in March 2013, is also the brother of Mr Bartolo’s permanent secretary, Joseph Caruana.

The medically certified ill health “results from profound disappointment at the discovery of serious breaches of government’s procurement regulations and of the Criminal Code and, more so, of your ministry’s hesitancy over a considerable number of months to appropriately discipline the prima facie prime culprit in good time,” Mr Rizzo told the Education Ministry’s permanent secretary, announcing his resignation with immediate effect.

The former FTS boss described as “pathetic” Mr Bartolo’s statement two weeks ago to the Times of Malta that his departure was not related to claims of corruption but to differences with the FTS chairman.

“[Mr Bartolo] has known the true reasons since the last week of April 2016, and he repeatedly attempted to dissuade me from formalising my discovery of serious multiple wrongdoings (committed primarily by a member of your own family) until the last day of August 2016,” Mr Rizzo told Mr Caruana.

Stating that he has lost all trust in the Education Ministry headed by Mr Bartolo, he wrote: “I have since come to the sad conclusions that the differences of ethics and appreciation and application of the law between myself and yourselves is unable to change through time, making it impossible for me to remain in the position of CEO of the FTS.”

He added: “What finally ‘broke my back’ was that on September 6, 2016, the newly appointed FTS chairman, Dr Emanuel Camilleri, ruled that, contrary to my suggestion, the FTS board should not call in the OPM’s Internal Audit and Investigations Directorate (IAID) to investigate the suspicions of multiple economic crimes that FTS executive management had ‘uncovered’.”

In his response, Mr Bartolo denied that he had attempted to cover up for his canvasser on the Rabat constituency.

“There is no basis in your remark that there was any pressure whatsoever to stop you from making formal reports. On the contrary, in the correspondence which I will be publishing, I have clearly given you the direction to take such steps. This e-mail is dated September 1, 2016. Again, if there is any evidence to the contrary, you are invited to forward this to complement the investigations,” Mr Bartolo told Mr Rizzo, who was appointed as FTS CEO on a person of trust basis by Mr Bartolo himself.

A day later, when speaking to the Times of Malta, Mr Bartolo confirmed Mr Rizzo’s departure but said that his ‘resignation’ was not related to corruption claims but to a clash with the FTS chairman on the working hours of a female cleaner.

At the same time, Mr Bartolo admitted that following an internal investigation, he had ordered at the end of August, there was prima facie evidence that Mr Rizzo’s claims against Mr Caruana were true and that these were passed on to the police.

Pressed to state whether he should carry political responsibility for his person of trust and his wrongdoings, Mr Bartolo brushed off any responsibility and insisted that he acted immediately as soon as he first heard about the allegations.

This claim is now being contradicted by Mr Rizzo.

On November 15, a day after Mr Bartolo’s comments, the Times of Malta reported that Mr Rizzo did not resign but was on long sick leave due to “the toll on his health from the facts about corruption and abuse” at the government agency he headed.

This newspaper is informed that police investigations concerning fraud and corruption of hundreds of thousands of euros related to infrastructural works at various public schools.

Edward Caruana was already in the news earlier this year following claims by a Gozitan contractor, Giovann Vella, who said he had asked for a 30,000 bribe in order to release some payments owed to him on works related to an extension of the Gozo sixth form.

Despite the allegations being made in front of Mr Bartolo, the ministry’s permanent secretary at the time did not feel the need to report the corruption claims to the police. On their part, the police did not investigate the claims but instituted charges against Mr Vella for tarnishing Mr Caruana’s reputation.

Following evidence in ongoing court proceedings, the police have now concluded an investigation on the claims of corruption and are awaiting advice from the Attorney General on how to proceed.