A fuel station in Gżira is being relocated further down the road and into part of the Ġnien Il-Kunsill tal-Ewropa, after an appeal by the local council was turned down.

The fuel station is currently located next to the bridge leading to Manoel Island, about 100 metres from the popular gardens on the Gżira strand. According to the description of works in the planning application, the station is being relocated because of a “road widening exercise”.

The new fuel station will be “approximately 100 metres down the road from the existing site”, the application states. 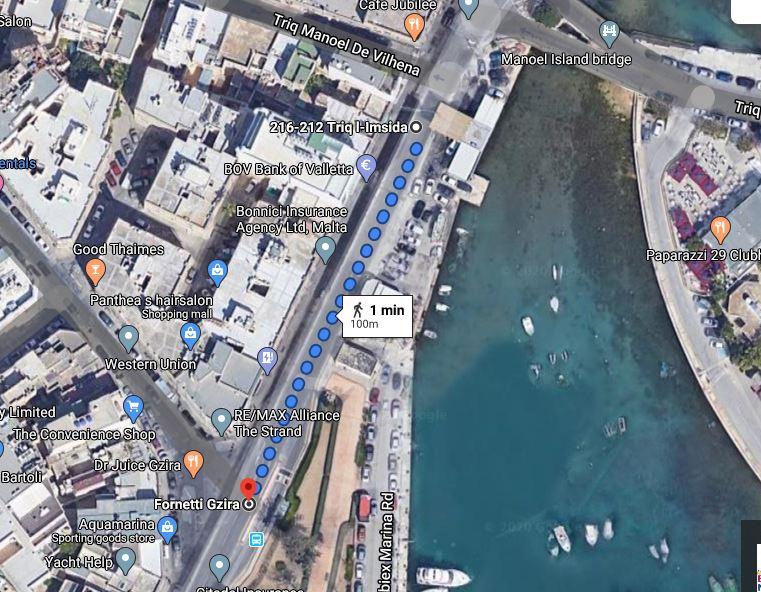 Google Maps screengrab shows the 100 metre distance between the fuel station's existing location and that being proposed.

While the existing site footprint is about 533 square metres, this is expected to increase to 660 square metres.

The area earmarked for the relocation includes the uprooting of two she-oak trees and an olive tree.

The Gżira council had objected to the move and filed an appeal with the Planning Authority, however, this was turned down on Thursday.

Reacting, mayor Conrad Borg Manché said he was “immensely disappointed” that the council’s appeal was turned down.

“I would have expected better than justification of such uglification because of old policies and widening of roads that today make no sense.

“This was aside from the fact that part of the gardens will be taken up and that the fuel station will now be next to the only open space in the most populous locality on the island,” the mayor lamented.

He noted that allowing the fuel station to be built on the foreshore was "madness" in the first place.

The mayor affirmed the council would be meeting urgently to discuss the matter and evaluate all legal options to try and fight the relocation.

Reacting, lawyer and environmentalist Claire Bonello described the move as a “cruel insult to the people of Gżira”.

“A town which has been ravaged by construction and commercialised intensely to the detriment of residents. Now they have even taken the garden,” Bonello said.