British artist Charles Allingham was one of the most skilled portraitists to visit and work in Malta in the first half of the 19th century. Although his works are much admired and highly sought after, the details of his life and oeuvre in Malta are sketchy as many local researchers and historians have found.

In recent years, Georgina Pavia has carried out exhaustive research on this subject for her Master of Arts in History of Arts thesis for the University of Malta: Charles Allingham (c. 1778-1850): the Socio-Artistic Context for his Work in Malta (2016). Reading in between the lines one can sense the researcher’s frustration that Allingham did not leave more distinct footprints in Malta which might have allowed her to paint a more detailed picture of Allingham’s sojourn on our islands. 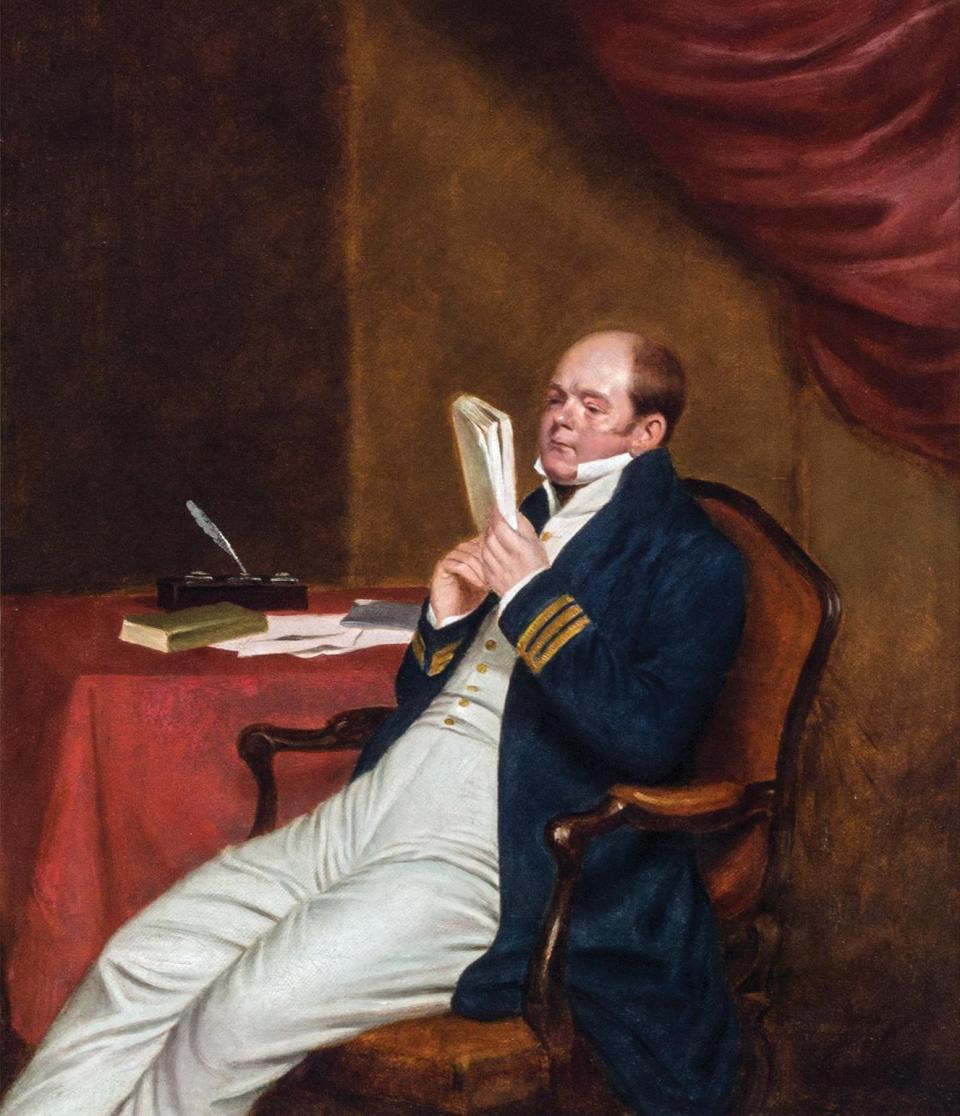 Portrait of Archibald Murray, as catalogued in 2019. Photo: Author’s collection

Earlier this year, Dr Albert Ganado, delving into his extensive collection of Melitensia, gave us more detail of Allingham’s life (‘Some thoughts on Charles Allingham’, Parts 1 and 2, Times of Malta, May 4 and 11, 2020). In his articles, Dr Ganado also shed some light on a few of Allingham’s portraits whose current locations are unknown. This article relates to yet another portrait by Allingham.

In her thesis, Pavia mentions three Allingham portraits of the Spencer family that hang at their family seat, Althorp House, in Northamptonshire. One of these portraits is of Captain Sir Robert Cavendish Spencer, RN, who was the subject of a previous article by the present author (‘Remembering Captain Sir Robert Cavendish Spencer’, The Sunday Times of Malta, December 17, 2017). It is the various versions of this portrait that are dealt with in this article.

In early 2019, a portrait in oils was offered at auction in the United Kingdom. It shows a cherubic faced naval officer lounging in his red upholstered mahogany Georgian armchair reading a flimsy book which seemed rather crudely folded over. A red tablecloth is draped over the table at his right elbow and on it lies an inkwell with quill pen; in front of this are a couple of non-descript but well-thumbed volumes and some scattered papers. In the background is a billowing vividly-coloured scarlet curtain.

Written boldly on the rear of the canvas is the following text: “Archd. Murray, 1830, Malta. Bequeathed by the above to me and presented to the family by John Murray, London, Nov. 27, 1840.” 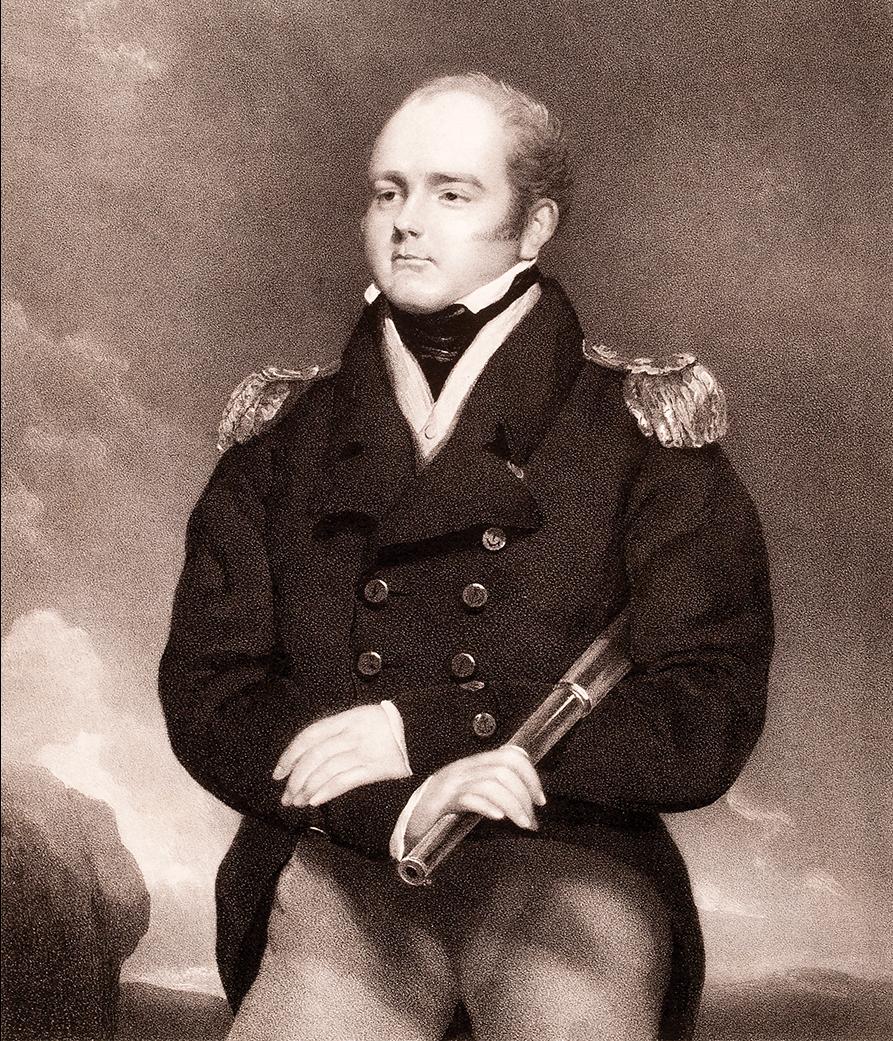 The portrait was described in the 2019 auction catalogue as a Portrait of Officer Archibald Murray. No artist was ascribed to the portrait.

On the face of it, given the description on the rear, the catalogue description seemed logical; however, something did not quite add up. That head, with its rotund outline and youthful features, seemed familiar; it bore an uncanny resemblance to the likeness of Captain Sir Robert Spencer Cavendish, RN, as depicted in Maxim Gauci’s lithographic portrait, which itself was based on a portrait in oils by Royal Academician Thomas Phillips. Can Archibald Murray have resembled Spencer so closely?

Furthermore, at an auction held in 2010 by Christie’s in London, which was billed as ‘The Althorp Attic Sale’, Lot 280 featured a portrait of Captain Sir Robert Cavendish Spencer, which appeared to be identical in composition to the 2019 version. The description stated that this portrait was “a copy of the picture hanging in the library at Althorp”. The principal difference between the 2019 portrait and the Althorp attic version is the monocle that hangs from the sitter’s neck in the latter version.

Considering the unusually relaxed posture, the physical features of the sitter in each of these two paintings and the setting, we can safely deduce that the two portraits are of the same subject. In addition, once the attic portrait is described as being of Spencer, we can safely assume a correct identification of the subject.

We can now conclude that there are at least three versions of Robert Spencer’s portrait: the library portrait confirmed as by Allingham; the attic portrait described in the Christie’s catalogue as ‘after Allingham’, and the 2019 version. The attic version was not sold in 2010. The latter is not the painting offered in 2019 since the presence or absence of the monocle distinguishes them as two different portraits. 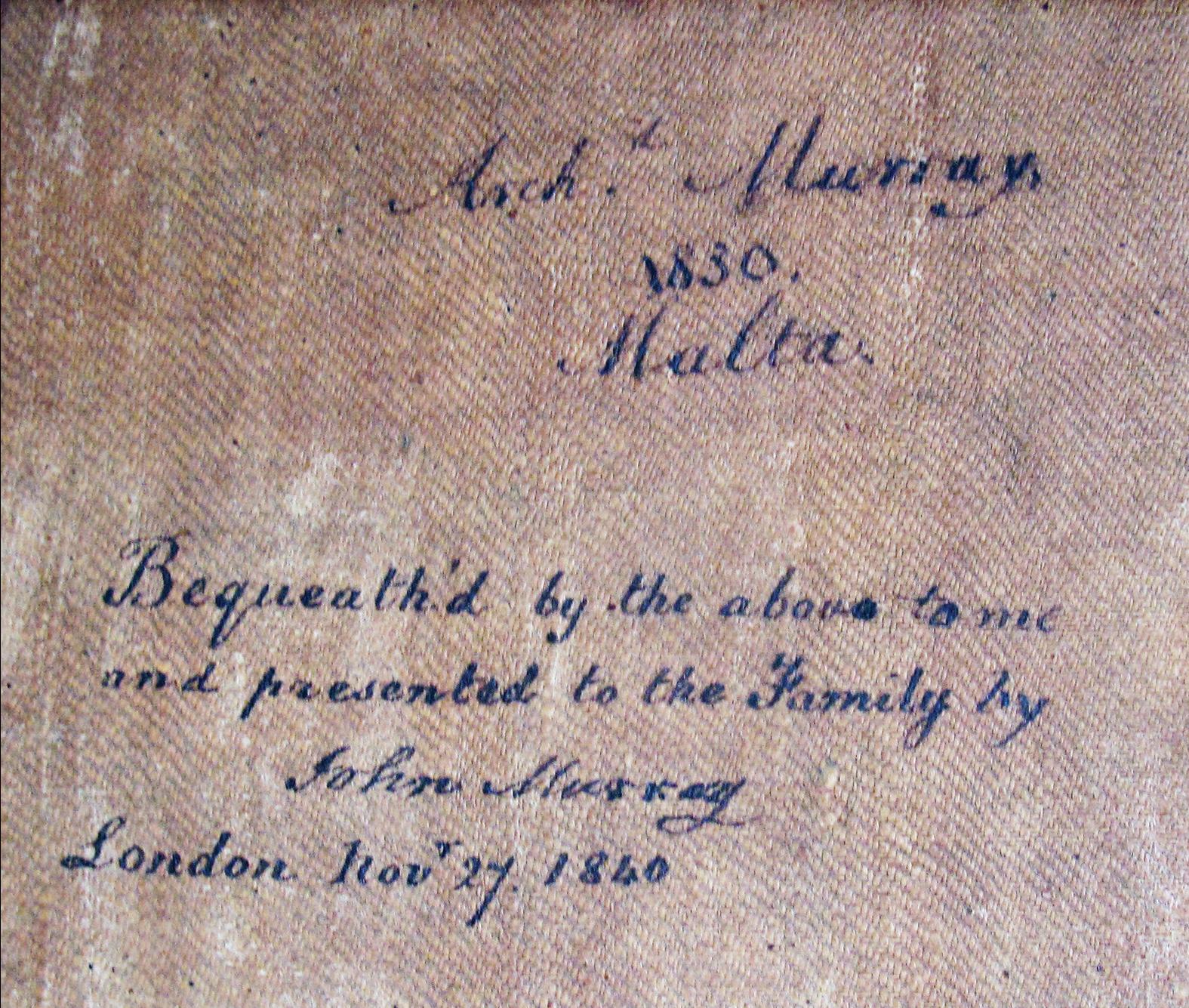 The text on the rear of Portrait of Archibald Murray.

The question of authorship remains: is the third portrait by Allingham? The technique is certainly of high quality. Allingham rarely, if ever, signed his portraits, so that evidence, while lacking, is not uncharacteristic. Moreover, we know that he occasionally executed copies of his own paintings.

So who was this Archibald Murray, RN? The name John Murray, included in the inscription, is quite distinctive, especially in the world of publishing. The house of Murray and the subsequent publishing dynasty was founded in 1768 by John Murray I (1737-93). According to the Oxford Dictionary of National Biography, the firm was taken over by John Murray II (1778-1843), the eldest and only surviving legitimate son of John Murray I. It was this Murray who was responsible for signing up the most significant authors of his day, such as Sir Walter Scott, Lord Byron and Samuel Taylor Coleridge, thus establishing the primacy of the publishing house. 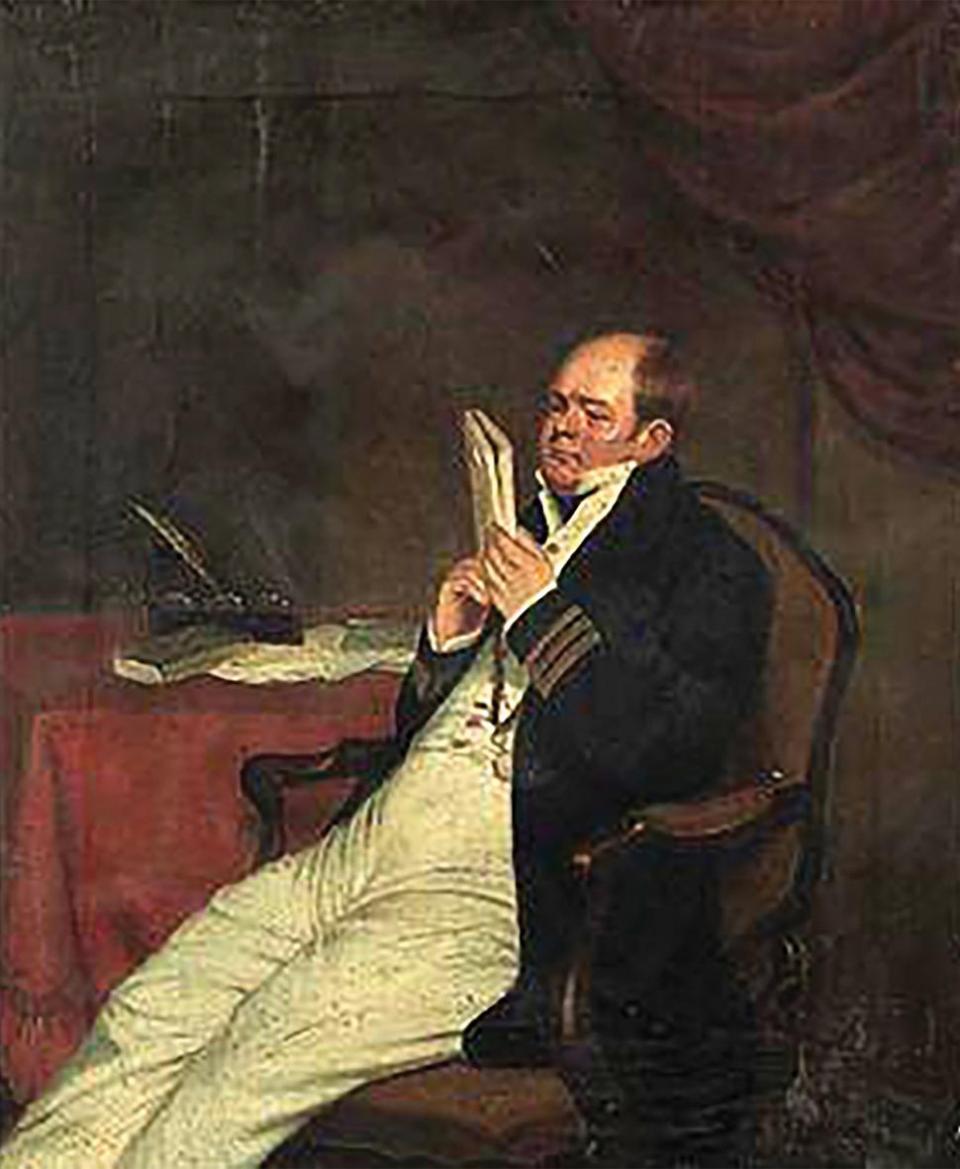 In the paragraph above it is clear that the inheritance of the family firm commanded great prestige, such that it was considered appropriate to hand it down, as with noble lineage, only to legitimate heirs (as considered in those times).

Archibald was the illegitimate son of John Murray I. Even though Archibald was marginalised he was supported by his father, who established him in a career in the Royal Navy. Nevertheless, Archibald shared a keen interest in books such that when he died in November 1840, the Exeter Flying Post newspaper announced that the auction of his books “occupied five days, during which period 6,157 books were disposed of”.

Even though books are featured in the portrait under consideration, it is likely that Murray’s naval career is more relevant to the unravelling of the conundrum regarding the identity of the sitter.

Archibald Murray was born around 1770 and joined the Royal Navy in 1794. In November 1811, he is recorded as having been appointed purser aboard HMS Malta (formerly the French 80-gun ship of the line, Guillaume Tell, captured off Malta in 1800) where he stayed until 1818, when he was transferred to the Rochefort. 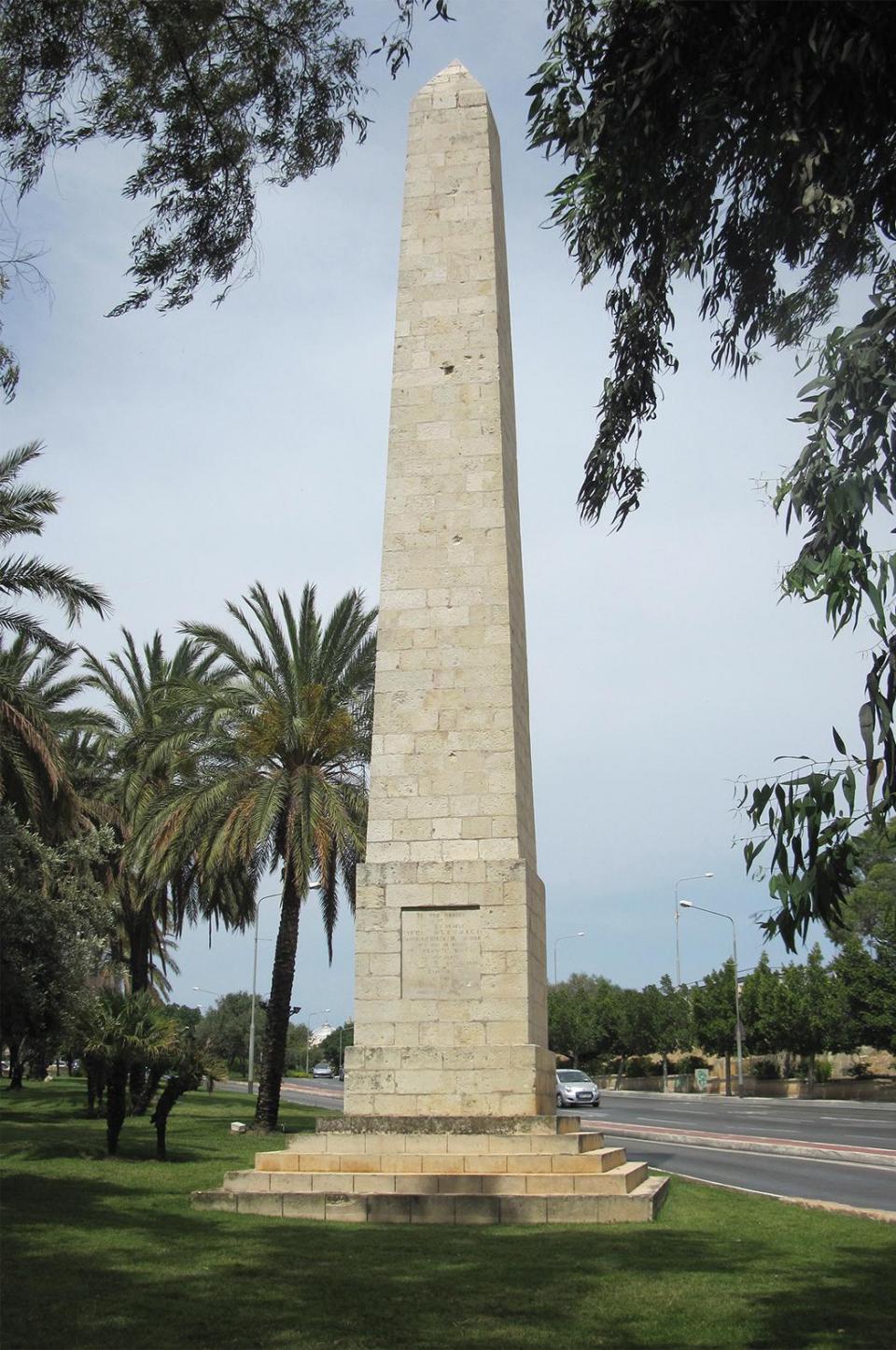 In October 1826 he joined the 84-gun ship HMS Asia, and at the end of March 1828 was appointed agent to the Naval Hospital at Malta. He remained in that post until 1833, when he was appointed to a position in Plymouth; he died there in 1840.

Let us now turn our attention to Robert Cavendish Spencer (1791-1830), who was the third son of George John Spencer, second Earl Spencer and First Lord of the Admiralty from 1794 to 1801. Robert entered the navy aged 12, aboard HMS Tigre, and later transferred to the Malta, on which he served until he was appointed to the command of the brig HMS Pelorus in October 1812, serving principally in the Mediterranean.

After a spell employed on the coast of North America, he returned to Malta’s shores in 1817 and remained in the Mediterranean for a further two years, returning again from 1823 to 1826. He then spent some time as private secretary and groom of the bedchamber to the Duke of Clarence (the future King William IV), returning to the Mediterranean in September 1828 in command of the Madagascar, aboard which he died, off Alexandria, in November 1830.

A comparison of both careers reveals that Murray and Spencer both served aboard HMS Malta, overlapping for a few months before Spencer was transferred to the Pelorus. They must also have come into contact between 1828 and 1830 when Murray was agent in Malta, and Spencer returned to the Mediterranean for what transpired to be his final years of service.

The purser was responsible for managing supplies and wages on board ship, so the two must have been familiar with one another aboard HMS Malta. They may possibly have established a friendship in these months, which was reinforced in later years when they both served in the Mediterranean.

It is quite feasible that Spencer gave his friend Murray a copy of his portrait as a memento of their time aboard the Malta. Since the first date inscribed on the rear of the canvas is 1830, the year of Spencer’s death, it may even be possible that Spencer had bequeathed this portrait to Murray, who received it that same year.

This would then indicate that the text relates more closely to the ownership of the portrait rather than the subject. This is supported by the fact that the remainder of the text explains the eventual transfer of ownership to the Murray family.

Any firm conclusions regarding the identity of the sitter may depend on further evidence, such as the will of Sir Robert Spencer; however, at the very least, the portrait might represent Archibald Murray, agent to the Naval Hospital in Malta from 1828 to 1833.

However, there is compelling evidence that the portrait represents Sir Robert Spencer, RN; that it was painted by Allingham is not yet clear; however, that it is based on a portrait of Spencer by Allingham seems certain – at a stretch it might even be another version by Charles Allingham.

The author wishes to thank Dr Albert Ganado and Georgina Pavia for their generous advice.