One year after a very successful fortnight at the Clover Mills Art Residency in the Netherlands, Gabriel Buttigieg (b. 1993) is embarking on a new venture in the United Kingdom. Between November 11 and 25, Buttigieg is attending a residency at Hogchester Arts in rural West Dorset, a programme founded by artist and curator Chantal Powell. During his stay, he will be sharing a studio alongside fellow artist Simon Linington.

The setting where the residency will be held is an idyllic one, with a diverse and beautiful kaleidoscope of woodlands and streams, and the ever-present bird breeding area. The archaic legends in this place run deep, entrenched as it is in the history of the Druids, with their unique accounts of myth and magic. 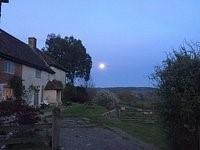 The idyllic setting of the residency.

With this serene landscape in the background, Buttigieg will be in an ideal position to explore the tales of the daily mundane. Through the use of fictitious compositions that dredge into the unconscious, the receptacle of the dung heap of humanity is dissected. The semblance of normality is maintained through the everyday encounters and events which pepper our lives, that which presents itself under the guise of the commonplace, that which is, in fact, a reflection of the vile darkness of the soul.

Through the symbolic use of animals and humans in sexual union, the artist will set out to challenge boundaries, in his bold and intrepid manner. By shining a light on that which humans are attracted to on the basis of the carnal instinct, yet instinctively shy away from due to logic, shame, and guilt, the collective shadow will be exposed and embraced. Where this enterprise will lead Buttigieg is yet to be discovered. In his unique style, he is bound to venture further afield in his creative journey.