The LNG tanker that will supply gas to the new power plant in Delimara has arrived in Maltese waters, power station operator Electrogas announced this afternoon.

The Armada LNG Mediterrana will bunker offshore at Hurd's Bank as it undergoes standard preparations and works on its anchorage system. It will then wait for Port Authorities to assign it a time slot to enter Marsaxlokk harbour.

A number of tests are to be performed for familiarisation, as well as safety drills

In the meantime, work is expected to continue on the moorings being installed in Marsaxlokk harbour, in preparation for the vessel to be berthed in the bay permanently.

Some problems related to the permanent anchor structures have been encountered, and work is expected to continue in the coming days to make sure that all is in place for the vessel to berth, sources close to Electrogas told The Sunday Times of Malta.

The 300-metre-long tanker is owned by Bumi Armada, a Malaysian company which is leasing it out for 18 years and two months under a contract signed with Electrogas.

The 31-year-old ship, originally named the Wakaba Maru, was converted into a floating storage unit in a multimillion-euro project at a Singapore shipyard.

The ship will be used in Malta as a storage facility for liquified natural gas, which will then be piped to an onshore regasification unit to supply the new gas-fired power plant. 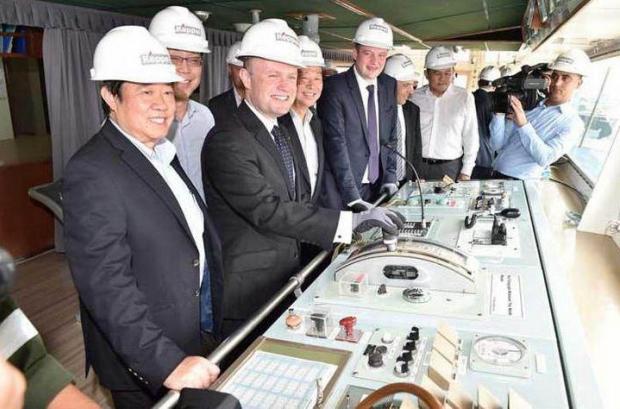 Prime Minister Joseph Muscat at the sail away ceremony of Armada LNG Mediterrana.

The massive vessel, which is embroiled in political controversy due to concerns over safety and its permanent presence in the picturesque fishing bay, was not part of the original plans proposed by Labour prior to the election.

The brains behind the project, Minister Without Portfolio Konrad Mizzi, originally said the LNG would be stored in two onshore tanks next to the power plant. He also promised that the project would be up and running by March 2015. 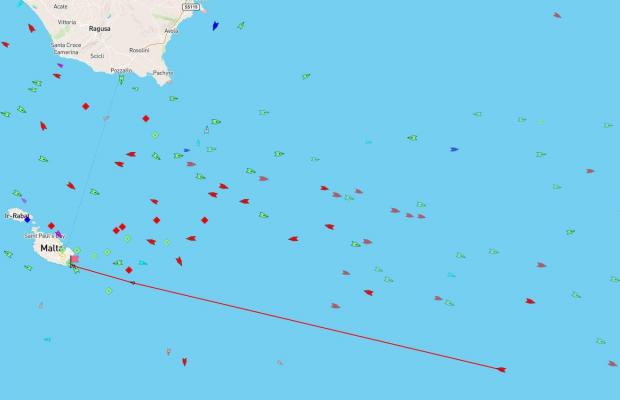 The LNG tanker is nearing the end of its voyage to Malta. The above image shows its location as of 10.30pm. Photo: MarineTraffic.com

However, plans had to eventually change when it was found that the cost of building the storage tanks onshore would be too high due to the weak structure of the foundations, while it would have taken more time than the promised two years to complete the project.

Despite choosing the LNG tanker option for a quicker project delivery, the power plant is already 18 months late and no new time frame has been set by the government on a new completion target.

In order to counter criticism about the permanence of the tanker in the bay, the government has said that the ship will only be there until a gas pipeline is laid to Sicily.

However, the pipeline is still in an embryonic stage, with major decisions yet to be taken. Experts in the field have told The Sunday Times of Malta it will take many years to build.

The Office of the Prime Minister did not reply to questions on the progress of the gas link and whether there is a target date for its commissioning.

The national broadcaster is airing political adverts which defend the “monument to corruption” heading to Malta in the shape of a gas tanker, the Nationalist Party said yesterday.

Meanwhile, the Broadcasting Authority has not yet responded to the PN’s protests over the adverts, the party said.

“These adverts are not only a source of political controversy, but are also incorrect and rife with lies which are intended to fool people about a tanker which will be anchored close to thousands of Maltese families,” said PN spokesman Clyde Puli.

The PN sent a letter of protest to PBS on September 24, but no reply has been forthcoming.

In a second statement, the PN said while the tanker, which will supply the new power station, is expected in Malta today, the government has yet to publish the necessary health and safety assessments in connection with it.