The Gasan family is looking to exit the Electrogas consortium, saying it does not want to be linked to the controversy surrounding the power station project.

“In view of the controversy surrounding this project and irrespective of the fact that we have done nothing untoward at any point, we have decided to identify all avenues to exit our interest and not to profit in any way from this investment,” Gasan Enterprises said in a press statement signed by chairman Joe Gasan and CEO Mark Gasan.

The family-owned company has an 11.72 per cent shareholding in the power station consortium that has been plagued by allegations of corruption and linked to the assassination of journalist Daphne Caruana Galizia.

It is one of three Maltese families invested in the project, along with the Fenech family of Tumas Group and the Apap Bologna family. The three together own GEM Holdings, which has a 33 per cent shareholding in the Electrogas project.

German giants Siemens and Azerbaijan's state energy company SOCAR each also have 33 per cent stakes in the venture.

In a statement on Wednesday, Gasan Enterprises said it had not received any dividends for their investment in Electrogas and had "only registered losses" from its investment. 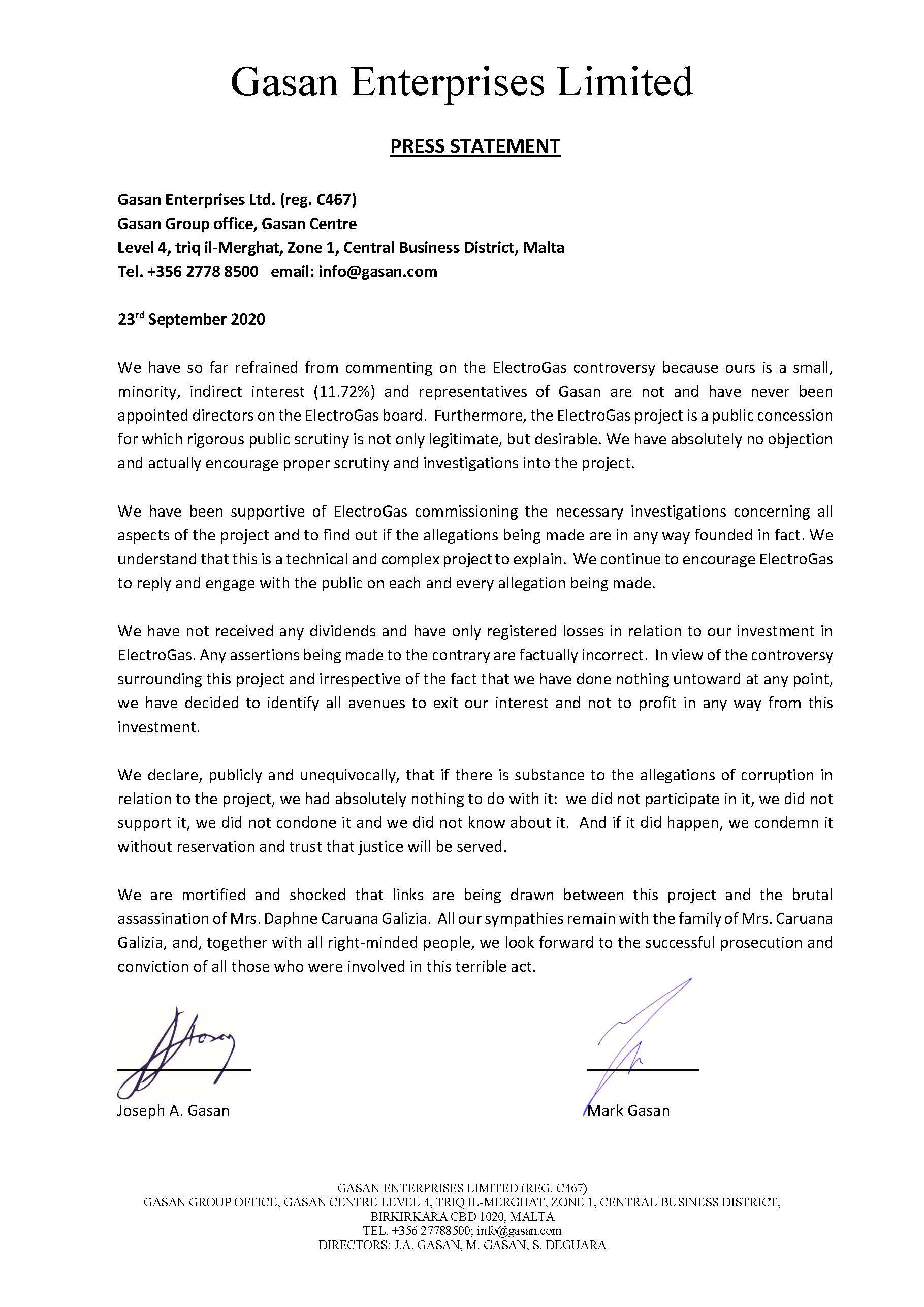 The project has been plagued by controversy for years and has continued to make headlines in recent months.

A court has heard how former minister Konrad Mizzi ordered that Enemalta absorb an excise tax bill running into millions owed by Electrogas, while Times of Malta has revealed how the consortium was secretly given 18 years of breathing space to pay €18m in damages to Enemalta.

A National Audit Office report into the bidding process for the power station project found multiple instances of non-compliance in Electrogas' winning bid. On its part, Electrogas has said that an internal review found no evidence of wrongdoing.

In its statement, the Gasan family distanced itself from allegations of misconduct.

“We declare, publicly and unequivocally, that if there is substance to the allegations of corruption in relation to the project, we had absolutely nothing to do with it: we did not participate in it, we did not support it, we did not condone it and we did not know about it. And if it did happen, we condemn it without reservation and trust that justice will be served,” the Gasans’ statement read.

The project has also been linked to the murder of journalist Daphne Caruana Galizia, after one of the consortium's shareholders, Yorgen Fenech, was charged with complicity in her assassination.

Fenech served as director of Electrogas shareholder GEM Holdings until his arrest last November.  Caruana Galizia received a large cache of leaked Electrogas documents in the months prior to her murder.

The Gasan family said it was "mortified and shocked" that the power station project was being linked to Caruana Galizia's assassination.

"All our sympathies remain with the family of Mrs Caruana Galizia, and, together with all right-minded people, we look forward to the successful prosecution and conviction of all those who were involved in this terrible act," the family said.

In a reaction, rule of law NGO Repubblika said that while the Gasan statement was a step in the right direction, it was not enough.

With the power station having become a scar on the nation linked to the murder of Daphne Caruana Galizia, the whole truth about it needed to become known so that everyone could be held accountable for his actions.

The Gasan family needed to explain how the power station contract was drafted, what meetings were held, before, during and after the tendering process, shareholding arrangements which indicated that funds could be transferred to Keith Schembri and Konrad Mizzi, among others, the relationship with secret company 17 Black and any other aspect linked to this 'factory of corruption'.

In a statement, the Nationalist Party said the full truth about Electrogas needed to be revealed.

It reiterated its call for the government to publish, in full, all documents related to the contract. Prime Minister Robert Abela also needed to act against Joseph Muscat, Keith Schembri and Konrad Mizzi who were the minds behind this 'monument of corruption'. The party also urged anyone having information about this project to come forward.

In a statement, PN leadership candidate Bernard Grech said that what was meant to be the flagship project by Joseph Muscat, Konrad Mizzi and Keith Schembri had ended up being an object of shame and a monument to corruption.

He said that should he be elected, he would take court action for the Electrogas contract to be stopped and for the people to be freed from the excessive burdens which stemmed from corruption.