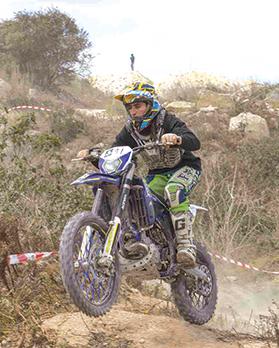 The Assoċjazzjoni Sport Muturi u Karozzi (ASMK) last Sunday organised the sixth and last round of the 2015/2016 Enduro Championship, sponsored by Pasta Poiatti and Dunlop Tyres.

The setting of last weekend’s event was a quarry in the limits of Mqabba, featuring 21 competitors who were divided into two categories.

The focus on the day was on the title duel between leading riders Matthew Gauci, riding a Sherco bike, and Joseph Scicluna, on a KTM.

Gauci occupied top spot heading into Sunday’s race but Scicluna was still in with a chance of winning the championship if his rival failed to win.

After posting the best time in qualifying for pole position, Gauci showed excellent composure as he dominated the second heat to secure the Enduro title for the first time in his career with a total of 112 points.

Despite finishing third in Mqabba, Scicluna retained the runner-up spot in the top Enduro section on 92 points while Ian Scicluna, also on a  KTM, took third place on 65 points

In the category for bikes of a smaller capacity, Andrea Scicluna, on a KTM, took the honours at Mqabba with a best time of two minutes and 40 seconds.

Scicluna was followed in second place by Trials biker Rowen Bonello, on a Yamaha, who closed the day with a best time of two minutes and 47.90 seconds.

The ASMK events continue this Sunday with a Trials competition, the sixth in this season’s championship, at the Tarġiet Għomor quarry, limits of Naxxar.

Action sets off at 9am.

More information may be found on the ASMK official website www.asmk.org.mt or on the association’s Facebook page.