A gender equality mechanism for parliament should not be restricted to only allow candidates from the two major political parties to be elected to the House, a Nationalist Party MP argued on Tuesday.

“Gender equality should not stop with the election of just two parties to parliament,”  Nationalist MP Hermann Schiavone told the House as he proposed an amendment to a Bill moved on Monday.

The Bill will add up to 12 seats to parliament if one of the genders is under-represented after a general election. The additional seats will be filled by candidates from the under-represented gender, raising their representation to 40% of the total membership of the House.

The selected candidates will be those from the under-represented gender who came closest to being elected.

Presented to parliament on Monday, the government proposal will however kick in if only two parties elect members to parliament. Malta's parliament is traditionally a two-party affair, with seats dominated by the Labour and Nationalist parties.

The government has offered no explanation behind the provision, which outraged PNPD as well as academic and former MEP candidate Arnold Cassola.

"This is the biggest electoral fraud they have agreed upon: benefiting PN and PL women at the expense of Maltese women," Cassola said earlier on Tuesday.

ADPD said the system being proposed was an example of collusion between the two major parties to further twist an already skewed system in their favour.

"It is ironic that the concepts of  ‘equality’ and ‘quota’ are perverted so much to fit into the PL and PN scheme of things," the party said in a statement.

The party said that instead of the rebalancing mechanism being debated in parliament, legislators should introduce laws requiring party lists of candidates to be gender-balanced.

Speaking in parliament, PN MP Schiavone said he saw no reason for the clause. Should a third party be elected to parliament, winning five seats, it should be credited one of the additional seats. It this party allied itself with the opposition, this party would take one of the seats given to the opposition, and if it is in coalition with the government, it would take one of the additional seats given to the government.,

The Nationalist MP said he would also be moving an amendment which would require casual elections to be held immediately after the result of the general election is known.

At present, when candidates are elected from two districts, casual elections are held several days later, after the parties decide which district the elected candidate would give up.

Schiavone said that now that Malta has electronic counting votes, the process should be simplified and automated. Rather than the parties choosing which district the successful candidate would give up, the system would automatically assign the candidate the district he was most successful in. He would thus automatically give up his seat in the other district and the casual election would be held automatically.

In a casual election, the ballots given to the successful candidate are re-counted and the candidate who gets most second preferences is elected.

Schiavone said the whole process should be automated, with no need for the Electoral Commission to issue a call for nominations for the casual election.

He explained that holding a casual election early, and then adding the extra votes for the under-represented gender, would mean more MPs, potentially women, would be available when the prime minister decides on the composition of the Cabinet.

Schiavone said he would also move an amendment to clarify how the candidates for the additional seats are ranked. He said they should be ranked by the percentage of the quota they achieved at the last count, and not by the number of votes, since the quota varied from one district to another.

Earlier, Schiavone also said that rather than doing badly in the polls, women tended to hold back from contesting elections due to other pressures.

He said that women who contested the general election in Malta enjoyed a successful election rate of 27 per cent, slightly better than their male counterparts at 25 per cent. 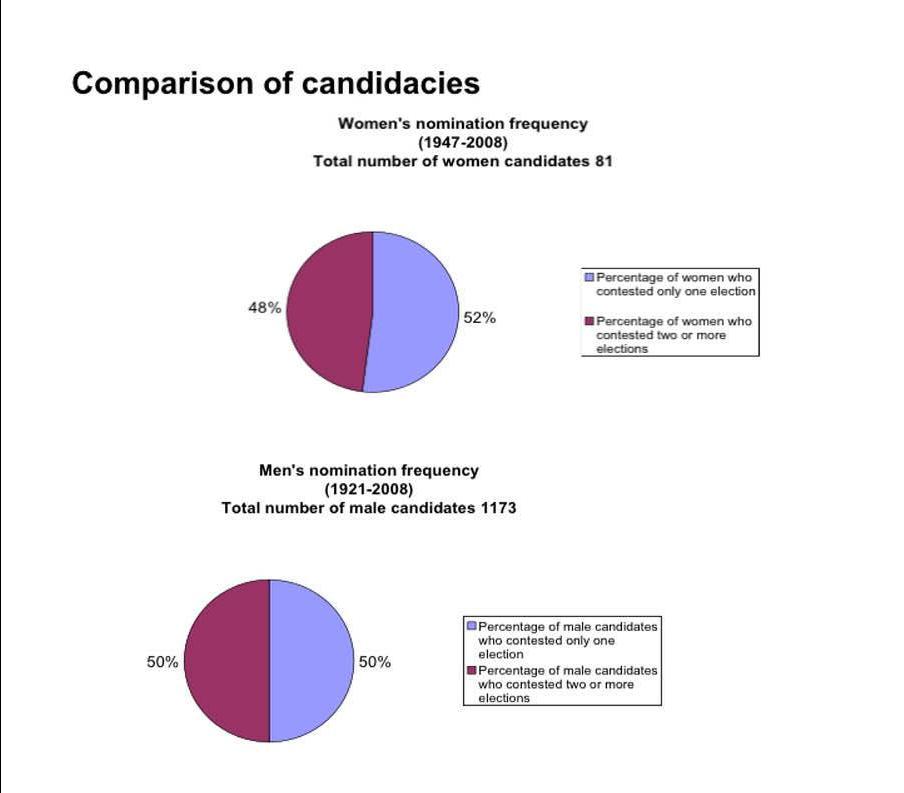 Charts produced by Herman Schiavone from data on www.maltadata.com.

“It holds then that the problems faced by female politicians are socio-economic and cultural ones, because women still carry a lot of the burden of family care and the women elected to this House have dedicated partners who have to help them,” Schiavone said.

“A lot of the responsibility of raising children still, unfortunately, falls to women, so this is why female candidature remains low.”

Opposition ready for talks with government to improve Bill

Opposition leader Bernard Grech called for coordination between the government and the opposition to improve the Bill.

He noted that in his address at the opening of the debate on Monday, Prime Minister Robert Abela said nothing about the Bill and did not even find it upon himself to congratulate Roberta Metsola on her election as first vice president of the European Parliament.

Abela only enjoyed listening to himself. Anyone who tried to contradict him was moved. An example was the removal of consultant Kenneth Grech from the COVID-19 committee earlier this week.

This Bill was a good step forward to bring about gender equality, Grech said, but it would not, on its own, solve the existing problems which were keeping women away from political life.

Grech touched on the amendments mentioned earlier by Herman Schiavone and said it would be arrogant of the government not to consider them.

It was his hope, Grech said, that politicians did not speak for the gallery. This also applied for the Bill to amend the divorce law, where the opposition is also suggesting changes. They included the mechanism how child maintenance was calculated.

Grech said he looked forward to a reform borne out of cooperation between the two sides.  If the government did not want to listen to the opposition, the people were listening and realising that the PN was seeking what was in the national interest.

Independent MP Marlene Farrugia said everyone was in favour of a more equal gender representation in parliament, but such a balance should not be achieved by a mechanism, such as this, which undermined democracy by sending to parliament people who the voters did not choose.

Malta already had a relatively big parliament, and taxpayers were being lumped with a bigger one. Women would end up being tokens, in parliament to make up numbers.

Through this law, the big political parties were saying they had no confidence in who the people chose. There was no doubt, however, that the people could choose women when they wanted to, as seen in the European Parliament elections where half the successful candidates were women.

Farrugia noted that she had worked as a dentist for almost 35 years. The profession used to be dominated by men, but she had made it without any quota. Similarly, there were now more women than men in the profession. That too could happen elsewhere, including politics. All that was needed was for people to vote for the most capable candidates.

This Bill, alas, is an attack on meritocracy, Farrugia said.