Kiosks and other concessions at Għadira might have to be removed or shifted in order for the sand dunes to recover, according to a 230-page study on a planned extension to Malta’s most popular beach.

The comprehensive project being planned by the government envisages that the present road would be replaced by a three-lane dual carriage road on stilts, which would allow the sand dunes to replenish. 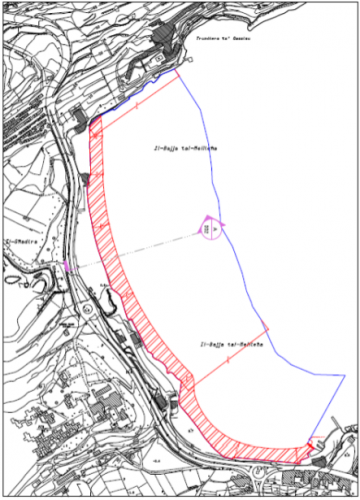 The project would be done in phases over several years, and according to the project description seeks “to re-dress the sand dune habitat degradation together with the moving inland of the shoreline and the consequent loss in sandy beach area which took place when Triq il-Qammieħ was being constructed in the latter part of the 1900s”.

In the 1960s, the shoreline was some 25 metres further out to sea than its present-day position.

Stakeholders are being consulted about the planned extension of Għadira Bay, Tourism Minister Konrad Mizzi said in parliament on Monday. The stakeholders include the Mellieħa Council as well as the Maltese representatives of Blue Flag International.

He was reassuring MP Robert Cutajar, who asked in a parliamentary question about whether an environmental impact assessment was being done.

The minister said a range of studies were being carried out, including a so-called ‘appropriate assessment’, a maritime assessment under the remit of the Environment and Resource Authority, and evaluations of the current and their impact on the bay at on the nearby breakwater.

Plans to extend the beach were submitted by Projects Malta, and use a combination of sand replenishment – dredged from the bay itself – and the construction of a barrier to deflect waves.

The plans drawn up by architectural firm Environmental Management Design Planning (EMDP) include a 20m new jetty near the Tunny Net complex.