Hopping vampires from China and disembodied flying heads and organs from Thailand have enticed hordes of people to an exhibition in Taiwan, scandalising religious groups who have called for the show's cancellation.

Ticket sales had to be temporarily suspended twice on opening day to avoid overcrowding inside the Tainan Art Museum on the island's south-western coast, with thousands waiting in line for a chance to see the gory display.

The show features traditional artefacts, artworks and pop culture about the afterlife in different Asian cultures, with much of the display borrowed from a French museum.

The main attraction is three lifesize depictions of Chinese hopping vampires – reanimated corpses whose stiffened limbs mean they can only move by bouncing along – with visitors lining up to imitate their grasping, outstretched hands.

“I expected many people to come, but not that it would be bursting with crowds,” Lin Yu-chun, the museum's director, told AFP.

Lin said the COVID-19 pandemic had made discussions of mortality more prominent in Taiwanese society over the last few years, even though it is generally a taboo subject in Chinese culture.

“Many of us have been directly impacted and have had to face death,” she said.

Hopping vampires from China and disembodied flying heads and organs from Thailand have enticed hordes of people to an exhibition in Taiwan. Video: Sean Chang/AFPTV/AFP

“I have never seen that many people here, not since the pandemic started,” said a vendor surnamed Su whose shaved ice stall is beside the museum.

“The line must have been at least one kilometre long,” she added.

Once inside, visitors can see depictions of ghosts from Thailand – such as krasue, a bodyless female ghoul whose glowing viscera hang below a floating head – as well as drawings of Japanese underworld spirits and works from Taiwanese artists.

Though the show has fascinated swathes of the public, it has alarmed religious groups.

A Christian church in northern Taiwan criticised the exhibit when it was first announced and called for it to be axed, saying online that it “defile(d) the country and people”, local media reported.

Other groups, including some Taoist temple ones, warned it was spreading superstition.

Local media reported the museum had prepared 1,000 protective charms to give out to show attendees to ward off bad luck. 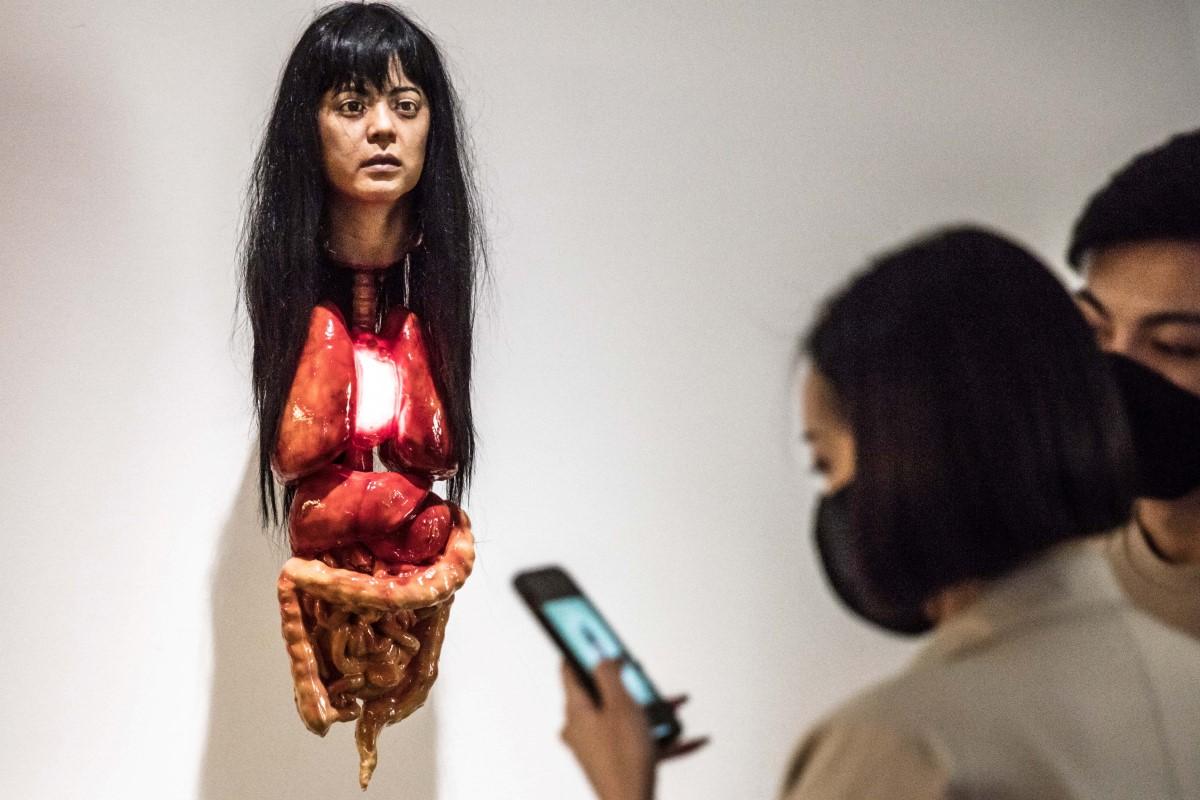 A visitor checking her smartphone past an art installation during the ‘Ghosts and Hells’ exhibition.

But Tony Lyu, a policeman in his twenties who visited the same day as AFP, said the show had allowed him to reflect.

“I will try not to do bad things from now on because of the fear (of going to hell),” Lyu laughed.

Zora Sung, 25, a hospital lab technician from capital city Taipei, said she was “moved and felt a little touched”.

“Hell is also a part of our culture we need to try to understand,” she said.