Apple co-founder Steve Wozniak said on Tuesday that Malta was “very smart” to be looking at ways to regulate blockchain, noting, however, there was still a long way to go before the technology was available to all.

“I think there is a lot happening and, in my travels, I find that a lot of people are coming up with things that I’ve never even thought of. But I also feel that it’s like the early internet days, where investors were putting their money in the internet and our lives were all about the internet and then it crashed.

“Yet, it turns out now that everything is on the internet,” the giant of technology said during a conference organised by Gaming Innovation Group (GiG) yesterday.

Blockchain is a decentralised digital ledger that records transactions across different computers in such a way that the registered transactions cannot be altered retroactively.

The government announced in January it would soon be launching “the world’s first legal framework” to regulate blockchain, artificial intelligence and Internet of Things devices.

Mr Wozniak pointed out that while he believed blockchain was indeed “the future”, such advances in technology did not happen instantaneously and it could take a while before it was used by everyone. 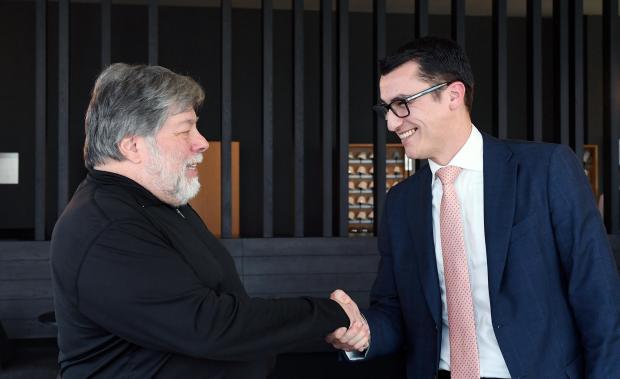 Addressing the audience, made up of GIG employees, IT students and tech enthusiasts, Mr Wozniak recalled how he had designed the first prototype of the personal computer in his garage, with no money and few resources.

He was wary of success, at times fearing sharing his PC designs. As Apple continued to grow, Mr Wozniak said, both him and his partner, Steve Jobs, made a fortune which he shared with those who had been part of the company from the beginning.

He urged the audience to have perseverance, recalling how, in the early days, he would write codes by hand and then input them into his device as he could not afford software to do such work.

Mr Wozniak subsequently left the company and completed his studies at the Berkeley University, in California.

He admitted that while having a certain degree of knowledge was important, one needed the passion to create something to become successful.