Valletta 2018 came to an end with Constellation Malta, a multi-site exhibition aimed at creating a discourse about contemporary art and popular culture in public spaces and heritage sites. Anna Marie Galea speaks to exhibition curator Rosa Martinez and artist Chiharu Shiota about their hopes for the exhibition to open a new artistic journey for Malta.

Constellation Malta, the closing exhibition for Valletta 2018, brought an experimental and multi-disciplinary project to generate dialogue about contemporary art and popular culture in public spaces and heritage sites all over the Maltese archipelago.

The exhibition helped shed new light on megalithic sites like Ħaġar Qim, the fortified cities of Mdina and the Citadel, and other historical and popular venues on the Islands.

Exhibition curator Rosa Martinez explained the thought process behind the curation of the recently-held multi-site artistic showcase in a very straightforward manner:

“The process of curating an exhibition is a very complex and organic one. I was very lucky to be guided by the regional coordinators of Valletta 2018 to wonderful locations in different parts of the archipelago.

“I visited museums, catacombs, churches, fortresses, and palaces. I also spent countless hours wandering through streets, gardens and quarries. All this made me become a kind of mediator, an interpreter of what the island offers.”

Martinez tried to marry this with the research, projects or work of artists that she already knew and with others she had never worked with. 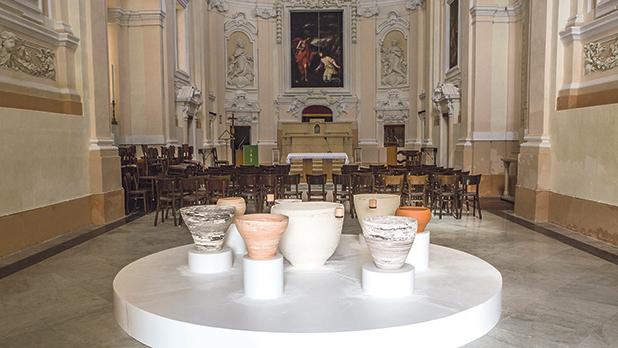 “I tried to create a balance between the possible and the necessary. In the exhibition that finally took the shape, visitors could see the result of this process of research and implementation,” she says.

Known for being the first female curator at the 51st Venice Biennale in 2005, Martinez fell in love with various parts of Malta and Gozo and wanted to be able to turn the sites she loved most into meaningful stars that would guide the viewer’s journey into a deeper understanding of the island and him or herself. 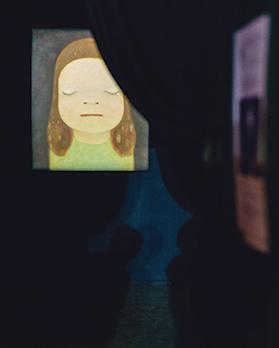 Mindfulness in the Dark Woods by Yoshitomo nara

“The church of St Mary Magdalene in Valletta and the Ta’ Kola Windmill in Gozo were the jewels of my desires at the very beginning. I am very happy with the projects we have been able to present there.

“The wonderful sound installation Swim Jam, by Kyung-Jin Cho from Korea, was just perfect for the church, as was the delicate bed sheet in Tania Berta’s Judith, with the embroidered names of 267 grandmothers, at Ta’ Kola Windmill. At the beginning, I thought Fort St Elmo would be impossible to use but, thanks to the Valletta 2018 team’s efforts, we had the major concentration of artworks there.”

The curator also mentioned the site-specific installation Circulation, by Chiharu Shiota, which created an incredible source of red energy; the videos of Forensic Architecture and Forensic Oceanography, which analysed the work that NGOs do to find the truth in relation to migration in the Mediterranean Sea; and the painting by Yoshitomo Nara where a girl meditates silently, probably on the disasters of war or on our human condition. 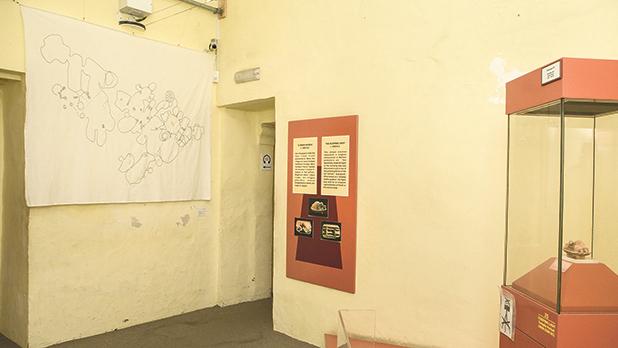 Last but not least, there was the photographic documentation of Disgħa, the amazing project by Austin Camilleri realised throughout the three islands of the Maltese archipelago.

The artist inscribed nine poems by nine Maltese poets in nine different locations and on different materials, to propose a reflection on time. Each piece was beautifully unique and focused on linking Malta as an island with the concept of memory.

Like Martinez, Japanese installation artist Chiharu Shiota was particularly intrigued by Malta’s deep connection with its history and with its present, and wanted to create a piece based on that.

“Malta is built on memory and you can feel it when you walk through the streets. I wanted to connect all these energies and the circles I have created are the points of energy: everything is connected in the middle. The circles are like a vortex; a storm of energy,” the artist said.

When  visiting Malta for the first time in December 2017, the artist could feel it was a special place. Shiota described our island as “very spiritual; there are 365 churches all over the island and you can go to a different church every day”.

In the beginning, the plan was to set up an installation in the church of St Mary Magdalene.

“I pictured weaving with red yarn, the same I usually use when I want to build an installation around blood and human connection. When the installation was moved to St Elmo there was a different kind of energy, a very strong presence of the invisible energies of the past. There was even a missile in the room. I decided that I wanted to connect this energy with my yarn.” 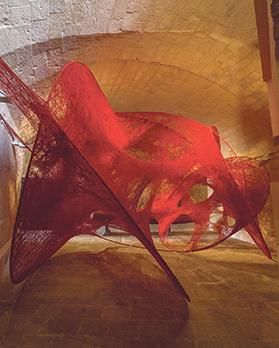 Shiota thought long and hard about how to best embody the energy she felt and how to integrate it into the Constellation Malta concept and finally turned to the subconscious for her answer.

“When I first heard of Constellation Malta, I was thinking about the connection between astrology and psychology and the psychologist Carl Gustav Jung and his theories about the collective subconscious, which consist of inherited foundations of human history.

“I think the piece I created talks to the subconscious and connects our inner energies with the outside. I wanted to work with energy, history and people, and I think the circle represented this best. It took me 10 days to set up, but the process of thinking about the installation and making the designs took me almost a year.

The process was a difficult one, as Shiota was not allowed to attach anything to the walls.

“This was the first time the metal construction became part of my artwork because, usually, we only make a metal construction and mount it on the ceiling in order to attach the yarn to it. For Circulation, the metal structure and the yarn were connected and both materials lose their meaning if they are separated.”

Martinez is full of hope that Constellation Malta marks the beginning of a new chapter in Maltese cultural consciousness.

“I would like the Maltese people to rediscover their own heritage thanks to the light given by contemporary art proposals. I want them to enjoy the new contemporary art languages that go beyond painting or classical sculpture.”

For international visitors, she adds, Constellation Malta also offered a chance to discover this country with all its wonders and its contradictions.

“I would really love for this not to have been simply the closing exhibition of Valletta 2018, but rather the one that opened Malta to the aesthetic languages and the political needs of living together with justice and in a more egalitarian way in the third millennium.” 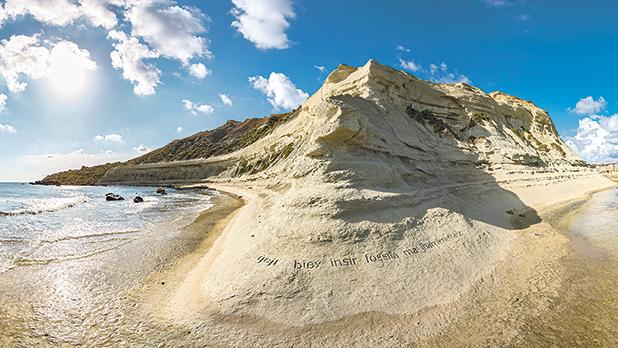