The etymology of Golgotha lies in the Aramaic language which translates into English as ‘skull’. Calvary is sometimes used to mean the same thing. This has Latin origins − calva means ‘bald head’ or ‘skull’.

Golgotha was the hill outside the city walls of Jerusalem which set the stage for the end of those who fell foul of the Roman law that governed Israel. Zealots and troublemakers were summarily executed through the vilest and most painful death by crucifixion. It was orchestrated to be a public spectacle, meant to humiliate the victims, besides torturing them before succumbing to a long-drawn excruciating death.

Scavenging birds fed on the carrion as some of the victims were left to decompose at the mercy of the elements and the hungry dogs. The dehumanisation was carried to the extreme as the victims and their corpses were Roman property, thus ultimately depriving the person from his most intimate belonging, his own body.

The remaining bones were taken down from the cross and tossed all around so that the hill really became an ossuary, a monument of skulls. The ultimate indignity was that these poor souls were deprived from a decent burial.

In the gospel’s narrative of the events following the death of Jesus, Joseph of Arimathea, a prominent member of the Sanhedrin, took it upon himself to ask Pontius Pilate, the governor of the Roman province of Judaea and, therefore, also the representative of Roman law, to be given the body to be buried. Joseph of Arimathea couldn’t do this without the prior consent of Roman authority.

In his exhibition Golgotha, Mark Mallia explores the guttural noun which has reverberated phonetically across the centuries and transcended language barriers. Golgotha evokes immediately the image of three crosses on a hill in a preternatural twilight, drama unfolding as narrated by the New Testament gospels and by other apocryphal sources.

There is another layer to the exhibition − the personal ‘Golgotha’ that has been, on many levels, a painful cross that each of us had to carry by the onset of the pandemic. 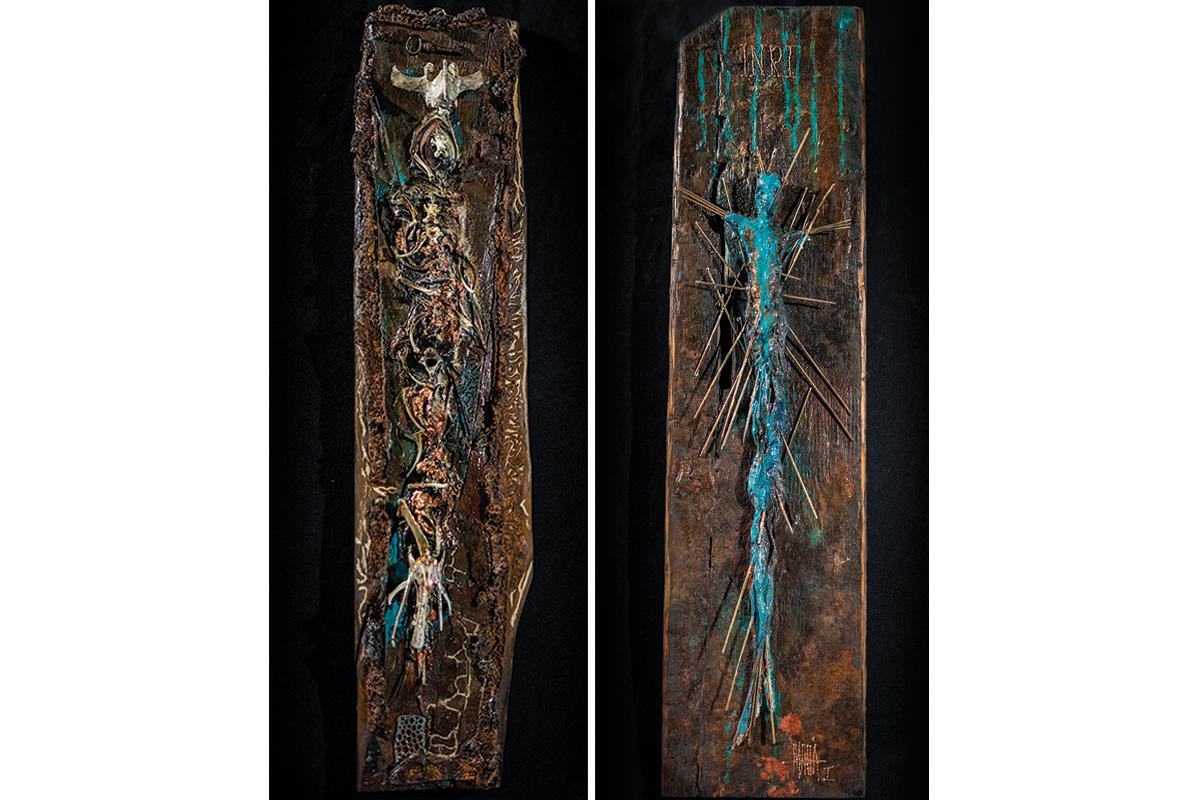 The iconography of the cross as the universal symbol defining Christianity has a history that harks back to the 5th century. Much later, during the 10th century, it appeared in Byzantine paintings. The Renaissance and the baroque have created whole scenarios that document the last moments of Jesus as He climbed the Golgotha to His crucifixion. Modernism has focused more on salient episodes through a process of elimination, thus arriving at a more elemental paleo-Christian depiction.

Everywhere that a great soul gives utterance to its thoughts, there also is a Golgotha- Heinrich Heine

Golgotha is a sequel to Mallia’s 2017 Zabach exhibition, held in a private chapel in Mosta. Both titles have Aramaic roots and thematic links; Zabach is translated as ‘sacrifice’. The artist’s use of bones of animals is emblematic; these poor beings were sacrificed to satisfy human hunger. There is ritualistic relevance in the act of sitting down at a table and consuming food. The Last Supper was one such ritual through which one of the sacraments was established. Mallia collects the debris of bones and uses them to create reliefs of crucified bodies.

One can be reminded of Antoine Camilleri’s use of rabbit and chicken bones, the leftovers from meals, to create works like Protest Cry (1961). By integrating animal detritus into his compositions, Camilleri created a representation of human burial, bringing everything full circle in some symbolic way, suggesting that, whether human or animal, we humbly share a common fate and we are made of the same organic stuff.

Christ is referred to as the sacrificial lamb that was slaughtered to sate a spiritual hunger so that mankind could be delivered to eternal salvation. The sacrificing of innocent creatures on an altar to assuage a bloodthirsty divinity is the basis of the three monotheistic religions. It rings more like a base animal necessity for quenching a bloodthirst originating from the dawn of times.

The paintings, or collages, of Mallia’s Kurċi series evoke Spanish artist Miquel Barceló’s own series of crucifixions. Barceló explores certain dualities like life and death, culture and nature by using a restrained palette and introducing skulls and other sculptural earthy elements that imbue the spiritual with a terrestrial dimension. 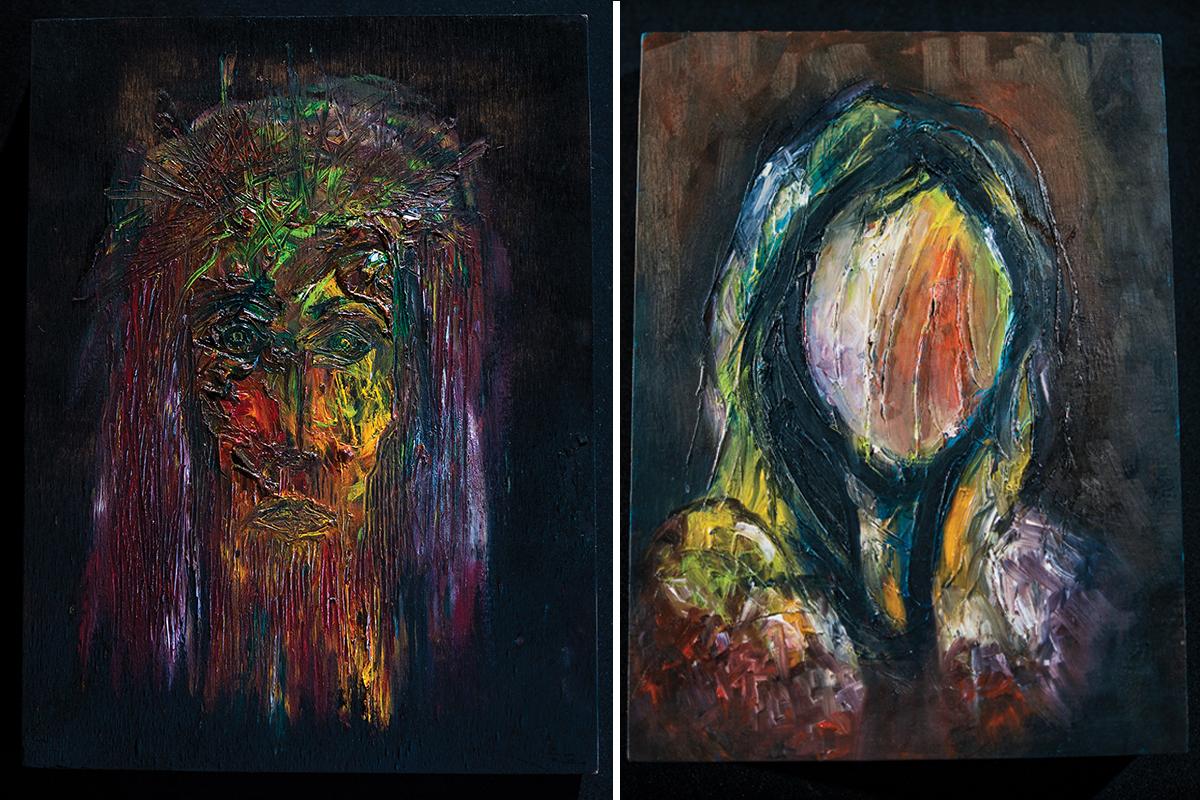 El Greco’s elongated and emaciated body of the crucified Christ is reduced by Barceló into an intimation of a corpse, lifeless and reduced to some sort of its empirical equivalent. Through a similar exercise of progressive elimination, Mallia concentrates on a trail of ‘cinders’ and fragile bones that evokes a humanoid fossil and carbonised flesh. The vulnerability thus portrayed increases the spirituality and the pieces semiotically glow as timeless religious icons.

Austrian artist Arnulf Rainer shares some of Mallia’s thematic language in this regard. Some of his crosses, just as Mallia’s, are bold evocations of the Catholic symbol in its most empirical form.

The painting Duluri Mistħija (a bashful Our Lady of Sorrows) lacks the iconographical facial characteristics associated with the silent pain endured by Mary as she experienced the horrific indignities and death that her only Son went through. She is often depicted at the foot of the cross, comforting Jesus during the last moments on some occasions; on others she is cradling His lifeless body for one last time before interment. Mallia, through this defacement, expresses the most agonising emotions by shrouding the visage in a rosy bashfulness amid longitudinal furrows of deep-seated sorrow.

“This is a mother whose son was accused in vain and summarily sentenced; spreading love was his only crime. This is a woman who has never harmed anyone and who lived the most reserved of lives. She is ashamed that, in spite of everything, people spared Barabbas and condemned her son,” Mallia remarks.  “The message I’m attempting to deliver is a universal and timeless one. It draws parallels with today’s world; a contemporary context in which criminals, thieves and corrupt despicable individuals from all walks of life are glorified as role models and saviours while genuinely good people are humiliated, mutilated, murdered and vilified. The Mother of God experiences shame in the acknowledgement of this dishonesty, in this dehumanisation of a son who, in this case, is the Son of God.”

Maktur il-Veronika draws on the apocryphal account of Veronica, also celebrated in the sixth Station of the Cross. The kind woman allegedly used her veil to wipe off the sweat and the blood drenching the face of Jesus as he was overcome with pain, sorrow and physical exhaustion as He carried the cross up the Golgotha to meet His fate. The apocryphal narrative recounts the moment as a miraculous testimony as His gory face was imprinted on the piece of cloth which became known as the Sudarium; a divine appreciation for such a kind selfless act.

There are hints of Mallia’s admiration for the work of Bernard Buffet in the stylisation and pathos that permeate some of the artworks in this series. The French artist’s crucifixions are highly-stylised works, the emaciation of his waif-like figures suggests a desperate lack of hope for humanity, with the catastrophe of World War II still fresh in the collective memory. Precious little has changed in over 70 years as the world is still seeking redemption amid tales of human tragedy, a pandemic and environmental disaster.

During these days of an abnormal Lent, Mallia invites us to ponder on our shortcomings and reflect on the callous murder of an innocent that happened 2,000 years ago. We are asked to find some meaning in the most irrational, to rekindle a faith that sometimes menaces to flicker out seemingly running out of air, especially during these pandemic times.

Augustine of Hippo exhorted us to find introspective structure and devotion in the most disconsolate of circumstances, when he wrote: “The deformity of Christ forms you. If He had not willed to be deformed, you would not have recovered the form which you had lost” – faith is sometimes a thankless task not easy to pursue in these godforsaken times.