The government said this evening that it backed a police appeal seeking an effective prison term for a man who was convicted of shooting a protected White Stork.

26-year-old tile-layer Gilian Tanti from St Julian's was taken to court this afternoon and admitted shooting the bird in Marsa yesterday. He was fined €5,000 and got a three month suspended jail term.

He also admitted carrying a loaded gun, firing in a residential area and using equipment to mimic bird sounds,

Magistrate Doreen Clarke, sentenced Mr Tanti to three months imprisonment suspended for one year and fined him  €5,000 to be paid within a year. The court also ordered the confiscation of the shotgun and banned Mr Tanti for life from hunting. He was also banned from possessing firearms.

Following the judgement the police said they would file an appeal and seek an effective prison term.

The government praised the police for arresting the hunter and taking him to court. It condemned such illegal hunting and said whoever was responsible would find the governemnt against him.

The government also welcomed the police decision to appeal since, it said, the police themselves felt the seriousness of the case merited an effective prison term. 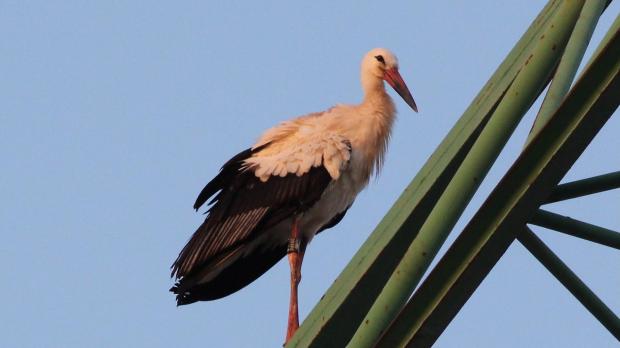 Earlier, Birdlife said the White Stork which was shot down over Marsa yesterday was bred in Udine, Italy, as part of a  re-introduction scheme. It was on its first ever migration south to Africa.

The White Storks arrived in Malta on Monday. Three of the flock were seen to have coloured rings on their legs to monitor their movements from a distance. Birdwatchers, using telescopes, were able to read the details on two of the rings, IAB PA190 and IAB PA200, the details of which were sent to the Italian ringing scheme to confirm the origin of the birds.

Birdlife said a photo of the dead stork had confirmed that this dead bird was one of the three  ringed storks.

"According to information obtained from the Italian ringing scheme, PA190 and PA200 arrived in Malta from the Oasi Dei Quadira WildLife Sanctuary in Fagagna, Udine, in the north of Italy, a centre specifically set-up by the local community to help storks repopulate the area. Both storks were confirmed as being juveniles hatched at the centre in June within nests close to each other. They were last seen in the area on the 9th September 2014, before embarking on their migration."

Bruno Dentesani, Scientific Ringer at the Wildlife Sanctuary said, “A huge amount of effort has been made in assisting these birds to repopulate Udine. The reintroduction initiative was started in 1989 by Dr Fabio Perco, with the ringing programme starting 19 years ago. We ringed a total of 152 white stork chicks, and this sighting in Malta is the most southerly we have had so far. This is a loss of great significance as we would have expected the bird to return to Fagagna in a few years to breed. This was their first migration, I’m very sad to hear of this news.”

Birdlife said that 10 birds were seen resting on the roof of St Vincent De Paule on Monday but later only eight were seen.  After the illegal shooting of one of this group, the 7-strong flock took to the skies again this morning. This afternoon the flockwas sighted again   but the number of individuals was now down to six, with rumours of another shot down in Ta’ Qali.

BirdLife Malta’s Conservation Manager, Nicholas Barbara, commented: “The ALE and WBRU have been effective in dealing with this killing which led to the recovery of the shot bird and apprehension of a suspect. However contrary to a government statement, such events are still a serious concern, as well as a reflection on the impact illegal hunting in Malta has on the rest of Europe”.