The government this afternoon booked an Air Malta plane to ferry migrants to Mitiga airport in Tripoli during the night, but the plans were called off late in the evening after the European Court of Human Rights, acting at the request of NGOs, issued an interim order prohibiting the push back of migrants.

Earlier in the day, the prime minister confirmed that the government was considering all options, including the possibility of sending back to Libya migrants who arrived today.

By 5.30pm tens of NGO volunteers gathered outside the back entrance of the police headquarters in Floriana to stop buses carrying migrants from leaving.

They complained that their representatives had not been allowed access to the migrants.

The migrants, totalling 102, arrived this morning and were held at police headquarters.

"All options are being considered in the national interest, but no decision had been taken, Joseph Muscat told timesofmalta.com.

"This is not push-back, it is a signal that we are not push overs," Dr Muscat said when questioned. When asked whether the government would repatriate the migrants if that action was illegal, Dr Muscat reiterated that all options were being considered.

Dr Katrin Camilleri, speaking for the NGOs, said this was a worrying situation, particularly because of the way Libya treated the migrants (See video). She insisted that the NGOs should be able to see the migrants and that the migrants should be told their rights.

BUSUTTIL - INTERNATIONAL OBLIGATIONS MUST BE OBSERVED

Opposition leader Simon Busuttil said this was a very worrying situation and he expected the prime minister to honour all international obligations.

Asked about an article he had written in 2010 about sending migrants back, Dr Busuttil said he was now opposed to push back because of a ruling by the European Court of Human Rights.

Today's group of migrants arrived on a dinghy off the Delimara coast. It was escorted to Marsamxett at about 6am. 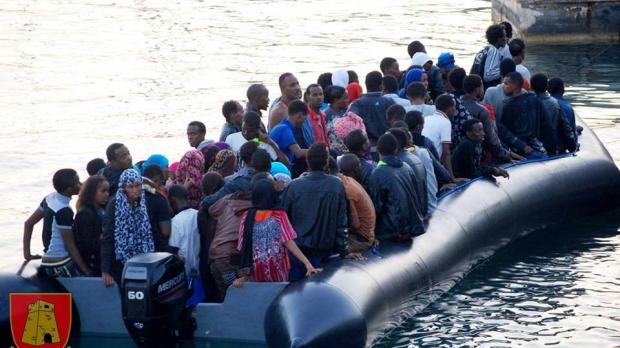 AD deputy chairman Carmel Cacopardo accused the Prime Minister of damaging the country by going against the country's international obligations.

The Prime Minister should return to the European Union the millions of euros the country was given to be spent on those seeking humanitarian protection.

But Dr Muscat was only capable of playing with the people's emotions, painting a picture of a major crisis and use the weak for political and populist aims, Mr Cacopardo said.

GOVERNMENT MUST NOT RETURN MIGRANTS TO LIBYA - NGOs

A group of 11 non-governmental organisations said this afternoon that the government must not return the migrants who arrived in Malta this morning to Libya.

This was because they would be subjected to torture and inhumane treatment and also because such an action would be a blatant violation of our international legal obligations.

"We, the undersigned 11 NGOs, are shocked that the government is even considering sending back to Libya the group of migrants that arrived this morning. The group of 102 included 41 women and two babies. All are Somali, which means they could very well need protection.

"The action contemplated by the government is precisely what the Prime Minister says it is not: it is a pushback, sending people who have come to our shores to seek well-deserved refuge, back to a country where they may well be killed.

"We do not deny that the migrant issue is a challenge for the Maltese government to tackle. However, it is unacceptable to use innocent people to score points and to bargain, in a bid to put Malta in a stronger position at the European burden-sharing table."

The NGOs said that it was certain that the migrants would face gross human rights abuses if returned to Libya - "those we met detailed the abuses they faced, especially in detention, among them brutal beatings and shootings, which left some permanently disabled."Those who return to Libya after attempting to reach Europe are singled out for especially harsh punishment. These claims are backed by the research of solid human rights organisations like Amnesty International and Human Rights Watch."

"This is a litmus test for us not only as a government but as a nation: we need to avert the temptation to consider only our national interest and to remember that we have much wider moral and legal obligations...

"We call on the Maltese government not to send people back to torture and possibly even death."

GOVERNMENT MUST REFRAIN FROM SENDING IMMIGRANTS TO LIBYA - ICJ

The International Commission of Jurists (ICJ) also called on the Government to refrain from forcibly transferring a number of Somali nationals to Libya, where they may be at real risk of human rights violations and further transfer to Somalia.

It expresses its grave concern at the possibility and said that, according to the office of the United Nations High Commissioner for Refugees - in Libya, migrants face a “constant risk of exploitation, arrest and indefinite detention”.

It referred to a European Court of Human Rights ruling that sending back potential asylum seekers, including of Somali origin, to Libya, without individual assessment of their situation and access to asylum procedures, violated the European Convention on Human Rights, in particular the principle of non-refoulement, the prohibition of collective expulsion and the right to an effective remedy for violations of human rights.

The ICJ calls on the Maltese Government to refrain from expelling or otherwise transferring to Libya any of the Somali citizens who arrived in Malta today.

"The migrants must be fully informed of their right to apply for international or humanitarian protection under EU and Maltese law; and each of their cases must be examined on its individual merits."