Rental prices for residential dwellings have gone up significantly over the past four years, spurred by a booming economy.

Unwittingly, it was government’s own publicity material as part of the bid to attract the European Medicines Agency to Malta that laid bare the average rental prices in different regions of the island.

According to the glossy booklet distributed to the media recently, as expected, rental prices are the highest in the central area, which comprises Sliema, St Julian’s, Gżira and Valletta.

This is a highly sought after area by gaming company foreign employees who want to live close to their place of work and the entertainment hotspot of Paceville.

Renting a three-bedroomed flat in these localities is a third more expensive than a similar apartment in the northern area comprising Mellieħa and St Paul’s Bay.

OPINION: The injustice of rent laws

Rents in the north are on average 10% higher than those in the Three Cities and Marsascala in the south.

Although the advertising booklet does not indicate the source of the information, the classification used is similar to that adopted by the Central Bank of Malta in its annual report for 2016.

In that report, the CBM noted that over a 10-year span, rents had risen by 40 per cent, with much of that increase happening after 2013. Increases happened across all regions, although they were more pronounced in the central and northern areas.

The CBM gave a number of reasons for the upward movement, including lower interest rates that encouraged people to buy property for rental purposes, the sale of passports to wealthy foreigners through the Individual Investor Programme and reforms to rental income tax laws.

READ: Trying to make rent in a booming Valletta market

A rising demand for residential property as accommodation for tourists and an increase in foreign workers, who are filling in the gaps in the jobs market created by Malta’s above average economic growth, were other factors. 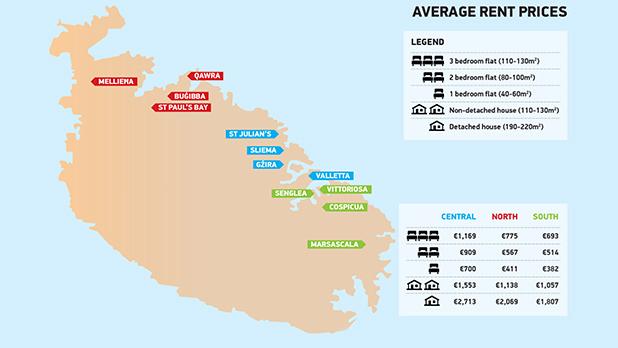 According to figures released by the National Statistics Office in March, foreigners have become the main population growth driver.

The NSO report, entitled ‘Trends in Malta’, said the number of foreigners settling in Malta last year was almost triple the number of births. In 2015 alone, nearly 13,000 migrants settled in Malta, with the number of non-Maltese living here more than doubling over the last decade.

These have created a demand for housing, which has benefitted landlords. But the flipside has seen Maltese families on low to mid incomes being squeezed out of the rental market.

READ: When should you hop off the buy-to-rent bandwagon?

According to the Central Bank, only 10% of Maltese households rent at market prices but the increases have been on the radar of anti-poverty campaigners. They argue that the unbridled free market is causing new social problems as landlords seek better returns from their property.

Malta’s bid to host the European Medicines Agency after it relocates from London as a result of Brexit could further fuel the demand for rental property.

If Malta manages to beat off the stiff competition from 18 other EU member states, the European agency’s 900 employees will have to relocate to the island. Half of these employees have partners and collectively they have 600 school-age children, who will also have to be catered for.