The government has promised to spend millions to introduce free public transport in a year’s time in a bid to reduce traffic congestion by getting motorists onto buses.

Will it work? It’s not a new concept. For years, some cities around the world have eliminated bus fares in an effort to make transport greener and take private cars off the roads.

Here are three places in Europe that have done the experiment – with mixed results.

Dunkirk – where free buses were a success

In September 2018, the French city of Dunkirk became the largest European metropolitan city to have an entirely free bus network for its 200,000 residents and visitors alike.

Dunkirk had already experimented with the concept of free public transport in 2015 when the city ran a trial – free bus rides at the weekends and on public holidays.

The declared aims were to help fight social exclusion, make trips more affordable and provide more mobility for residents in a city where over a quarter of households did not own a car.

Despite the low car ownership, two-thirds of journeys in Dunkirk were still being made by car. But before implementing the measure, the council focused on improving the service and extending bus routes.

The buses were given priority at intersections and each line started operating at 10-minute intervals, with connections to other bus services.

The number of lines was increased from ten to 17, and the fleet expanded from 100 to 140 buses, including greener vehicles powered by natural gas and offering WiFi connection.

Before the revamp, the buses were often almost empty.

Research shows that the move to free public transport has revived the city and buses are now seen as part of the ‘public space’.

The number of passengers increased by 60 per cent during the week and doubled on weekends. Several weeks after the scheme was introduced, some routes saw a 50 per cent increase in passenger numbers and others 85 per cent.

The increase came both from new and current users. Of the new users, 48 per cent reported to be regularly using public transport instead of their cars. Ten per cent said they no longer owned a car or had decided not to buy a new one.

The biggest contribution to the positive results came from people living in the heart of the community and who are well-served by the bus network.

Apart from the savings on bus fares, 40 per cent of respondents cited the increased efficiency and reliability of the network as the reason for using public transport more often.

The positive results have partly been attributed to the fact that Dunkirk is a relatively small town where such a project was easier to implement than in larger cities. 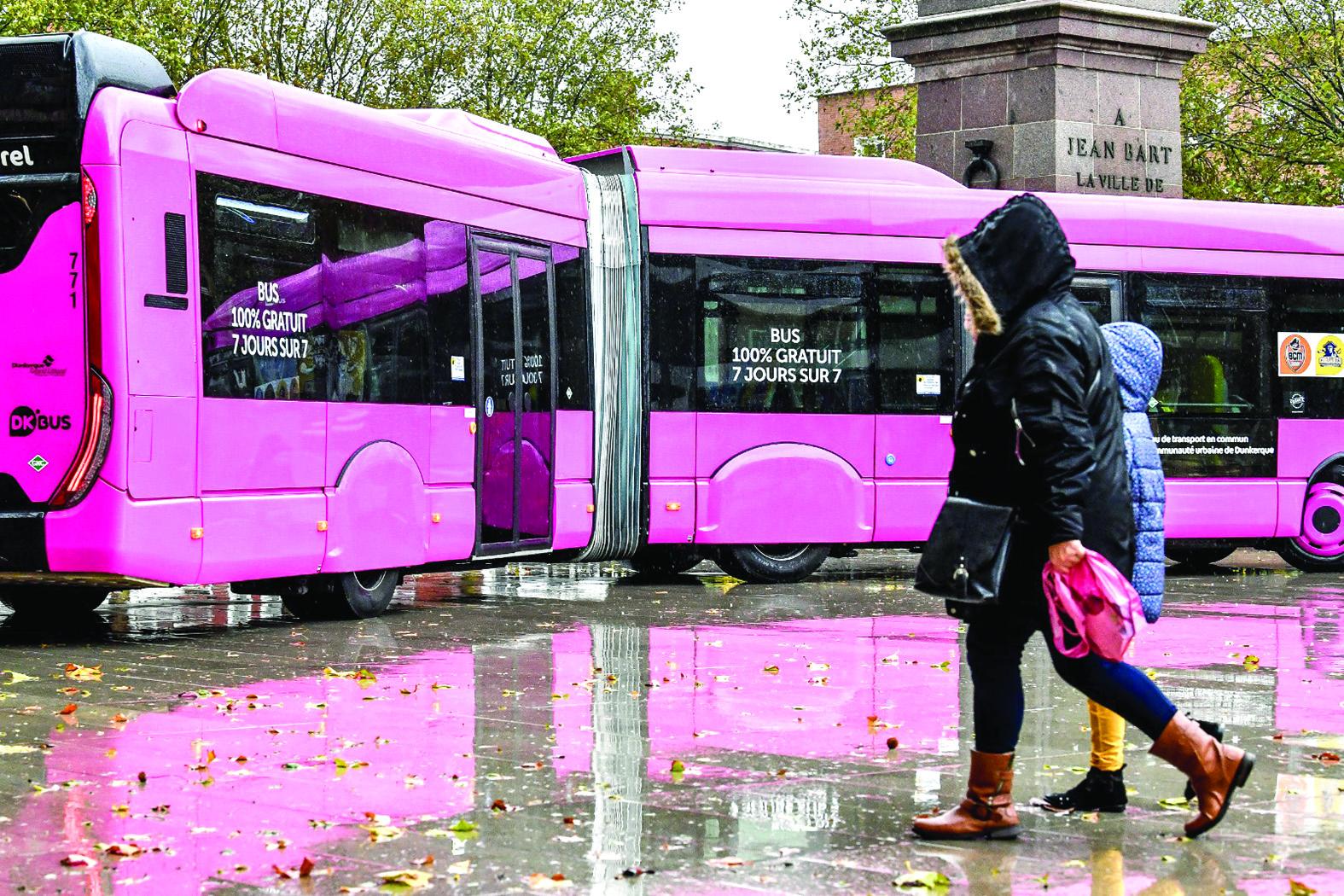 In Dunkirk, the number of passengers increased significantly after buses became free and the network more efficient.

On February 29, 2020, Luxembourg became the first country in the world to offer free public transport for both residents and visitors.

Before, a single fare cost just €2, while minors, the elderly and people with a disability already travelled for free.

Now, passengers no longer need a ticket for travel by bus, train or tram, unless they want a first-class train ticket, which costs just €3 for two hours and €6 for a full day.

Luxembourg (with a population of 626,000) is notorious for traffic. In 2019, it had the highest number of passenger cars per inhabitant in the EU, at 681 per thousand.

In the same year, more than 60 per cent of commuters travelled to work by car, compared with just 19 per cent on public transport. And every day, 200,000 workers crossed the border into Luxembourg from Germany, France and Belgium causing heavy traffic jams.

According to a research carried out in 2020, the public transport system was “slow and unreliable”, and roads and railways were “in a dire state”.

The free public transport measure was intended to improve quality of life and contribute to a more sustainable mobility infrastructure by reducing traffic, car usage and carbon emissions. It was also intended to help low earners.

Since the incentive coincided with the first full COVID-19 lockdown, it was difficult to make a reliable statement on whether the measure worked.

At the start of the lockdown in March 2020, that number dropped to 1,400, before gradually rising to an average of 38,000 daily passengers during the week.

In February this year, peaks of 42,000 tram passengers were reported during the week.

However, the picture was different for train travel: passengers dropped 39 per cent compared to the previous year.

This suggests that commuters still preferred to use their own vehicle, rather than hopping on to a bus or train for free.

And people were reported to still prefer taking first class on Luxembourg trains, despite having to pay for it.

The Estonian city of Tallinn (population 445,000) introduced free public transport for residents in January 2013, the first European capital to do so.

Before, a single-ride ticket cost €1 and an unlimited monthly pass was priced at €20.

The new measure entitled registered citizens of Tallinn to free public transport with the purchase of a €2 ‘green card’.

The stated reasons for ditching the fare were to tackle traffic congestion and help low earners.

In March 2021, the National Audit Office of Estonia published its report on Tallinn’s free public transport – and the results were disappointing.

Even though the demand for public transport did increase, the number of users did not reach the set target: a quarter of all people commuting to work.

Instead, more than half still drive their car to work (others walk) and there are no indications that they prefer public transport, the audit office concluded.

A 2016 study found that while those using public transport instead of cars was up by eight per cent, the average length of a car journey had gone up by 31 per cent. This meant there were more, not fewer, cars, on the road.

According to Statistics Estonia, in 2019, 20 per cent of the people used public transport to commute to work – two per cent fewer than in 2014.

“What is positive is that the decline in the share of public transport users has stopped for a couple of years,” Auditor General Janar Holm said.

“Unfortunately, not a significant number of new users have been attracted to public transport despite the fact that over the recent years, the state has allocated more and more funds to cover the costs of county bus transport and has allowed people to travel by bus free of charge in most counties.”

The audit also found that the bus network system was not designed to meet people’s mobility needs.