Social protection remained the primary expenditure function amounting to €1,655.5 million, an increase of €85.7 million over 2020, with the main increase reported in social benefits (€37.9 million).

A significant amount was spent on measures to mitigate the adverse effects of the COVID-19 pandemic, particularly the COVID-19 business assistance programme of €355.2 million and a further €42.9 million spent on the economic regeneration voucher scheme.

A share of government spending was also allocated to energy support initiatives to lessen the effects of the energy crisis (€77.4 million).

Total outlay on health stood at €970.7 million, a rise of €28.5 million, mainly as a result of a larger outlay on the compensation of employees (€48.8 million). This was followed by expenditure on general public services and education, which amounted to €913.3 million and €837.1 million, respectively.

Increase in almost all functions of government

Almost all functions of general government expenditure registered an increase, except for housing and community amenities, which stood at €77.7 million.

In 2021, the highest share of general government expenditure was spent on social protection, which accounted for 25.3% of the total outlay. 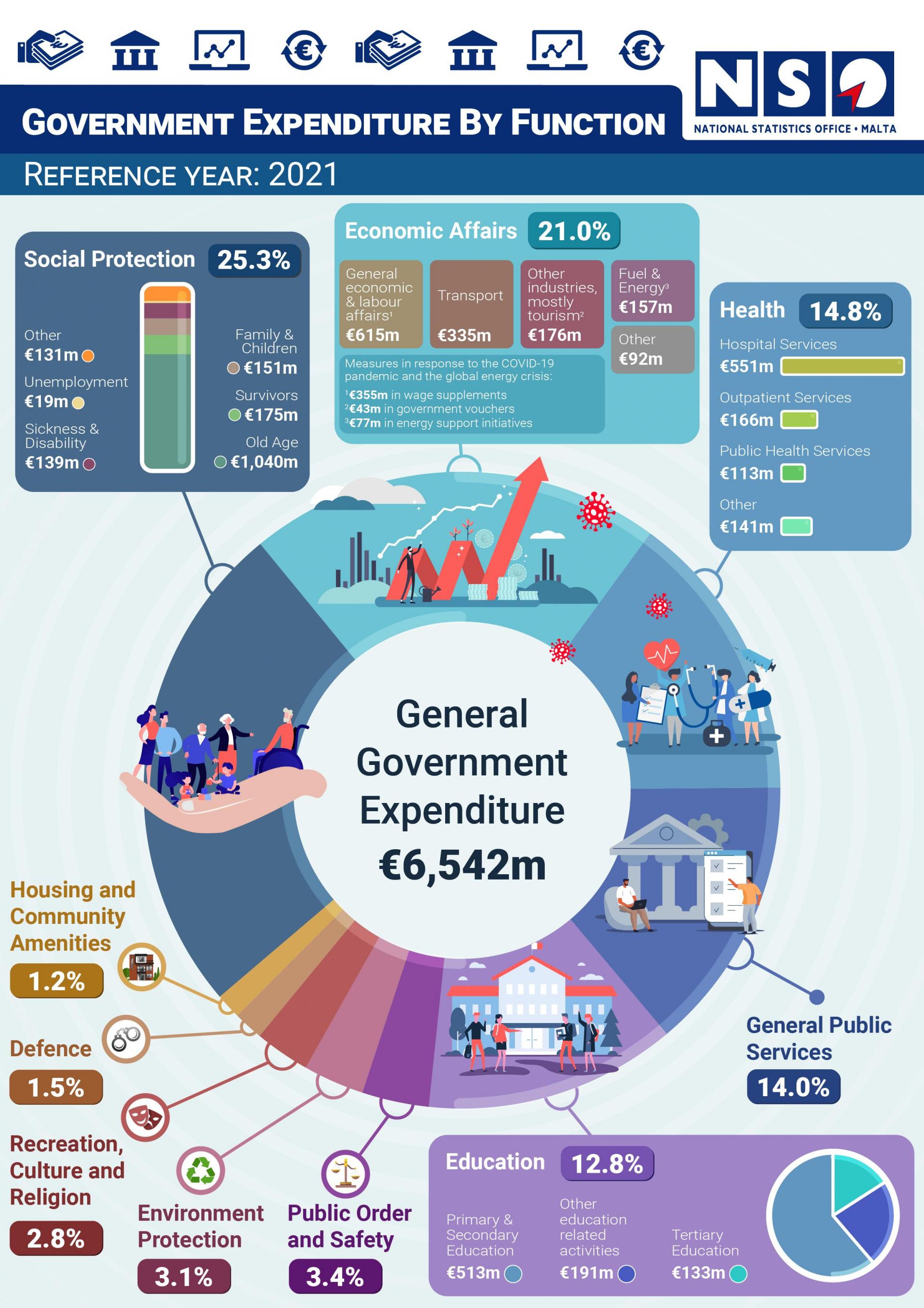 Expenditure on housing and community amenities had the lowest share of total expenditure, followed by defence, standing at 1.2% and 1.5%, respectively.

Spending on general public services as a share of total general government expenditure registered an increase of 1.9 percentage points over 2020, representing the highest increase.

Decreases in the share of expenditure were noted for economic affairs and health, down by 1.2 and 0.8 percentage points, respectively.

Expenditure as a percentage of GDP

A considerable share of government outlay was in the form of compensation of employees (27%), social benefits in cash or in kind (21.2%), intermediate consumption (19.7%) and subsidies (10.6%).

This was followed by expenditure on general economic, commercial and labour affairs, which amounted to €614.8 million, or 44.7% of expenditure on economic affairs.

A considerable share of general government outlay was spent on executive and legislative organs, financial, fiscal and external affairs (€576.1 million), followed by a total of €550.6 million and €335.4 million on hospital services and transport, respectively.