The teachers’ council is investigating the Gozo College head for “unethical behaviour” on social media, Times of Malta has learnt.

Sources said Denise Mifsud, the principal of the college, which is made up of eight primary schools, a middle school and a secondary school, is being probed by the Council for the Teaching Profession in connection with a post she shared on social media. 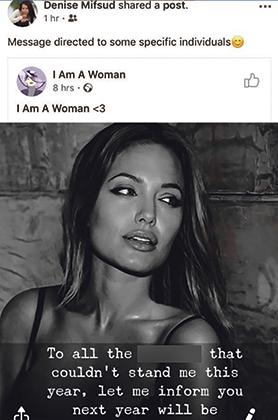 In the post (see screenshot on the right), which was shared with friends on Facebook earlier in January, Ms Mifsud uploaded a photo with text that contained an expletive and which, according to comments accompanying the post, was directed at “some specific individuals”.

The investigation was requested by the Malta Union of Teachers, which said the “high-level official” was in breach of five clauses of the teachers’ code of ethics.

“Among other things, educators are encouraged to act with a professional attitude and behaviour at all times and refrain from making public statements which bring the profession into disrepute,” the MUT said, adding it was ready to submit any further information as requested.

When contacted by Times of Malta, Ms Mifsud asked that questions be sent to the Education Ministry, who, in turn, told the newspaper it would not be commenting because “the process is currently ongoing”.

Teachers who spoke to Times of Malta on the condition of anonymity said they were infuriated that Ms Mifsud was not suspended, at least pending the outcome of the investigation. They argued that such behaviour was not acceptable and teachers were often told off by their superiors for bad practice on social media.

“Had it been anyone else, there would have been very serious repercussions but this does not seem to be the case with this principal,” one teacher remarked.

Confirming that an investigation by the teachers’ council was under way, Education Ministry sources said steps had already been taken against Ms Mifsud.

The issue that prompted her to share the post was not related to her work at the college but to personal matters, they said.