Dozens of Gozitan residents gathered outside the Curia on Monday to urge Archbishop Charles Scicluna to “stop enabling ruthless speculators from ruining their lives and environment”.

The group of around 30 residents fear they will face eviction from their homes because of a dispute over land managed by a foundation for 300 years and recently transferred to private companies.

Joined by the NGO Moviment Graffitti, the residents demanded the Archbishop “reverse his decision" to hand over control of a medieval foundation to "ruthless speculators”.

They held placards aloft accusing him of hypocrisy and asking him to dismiss the head of the foundation Abbazia di Sant Antonio delli Navarra.

The foundation is a lay one, but has an administrator appointed by the archbishop.

"Instead of being there to give an example, he negotiated with these people," said one resident, Tony Cassar. "You should be ashamed of yourself for saying you didn’t know what is happening," he added.

The Church has said it could not forsee the situation.

According to the activists, speculators are threatening residents of two Gozo localities with eviction, increasing the leases of farmers and building monstrous projects that are ruining Gozo’s landscape and natural environment.

In recent months, several Nadur and Qala residents have been approached to pay hefty sums of money for their property, as a land-ownership dispute dating back more than 300 years ago came to a head.

“Netflix would film five seasons over this saga, it is so outrageous,” said resident Joseph Azzopardi.

He said that more people had wanted to be at the protest but felt upset by the situation that they hadn't the strength to come. 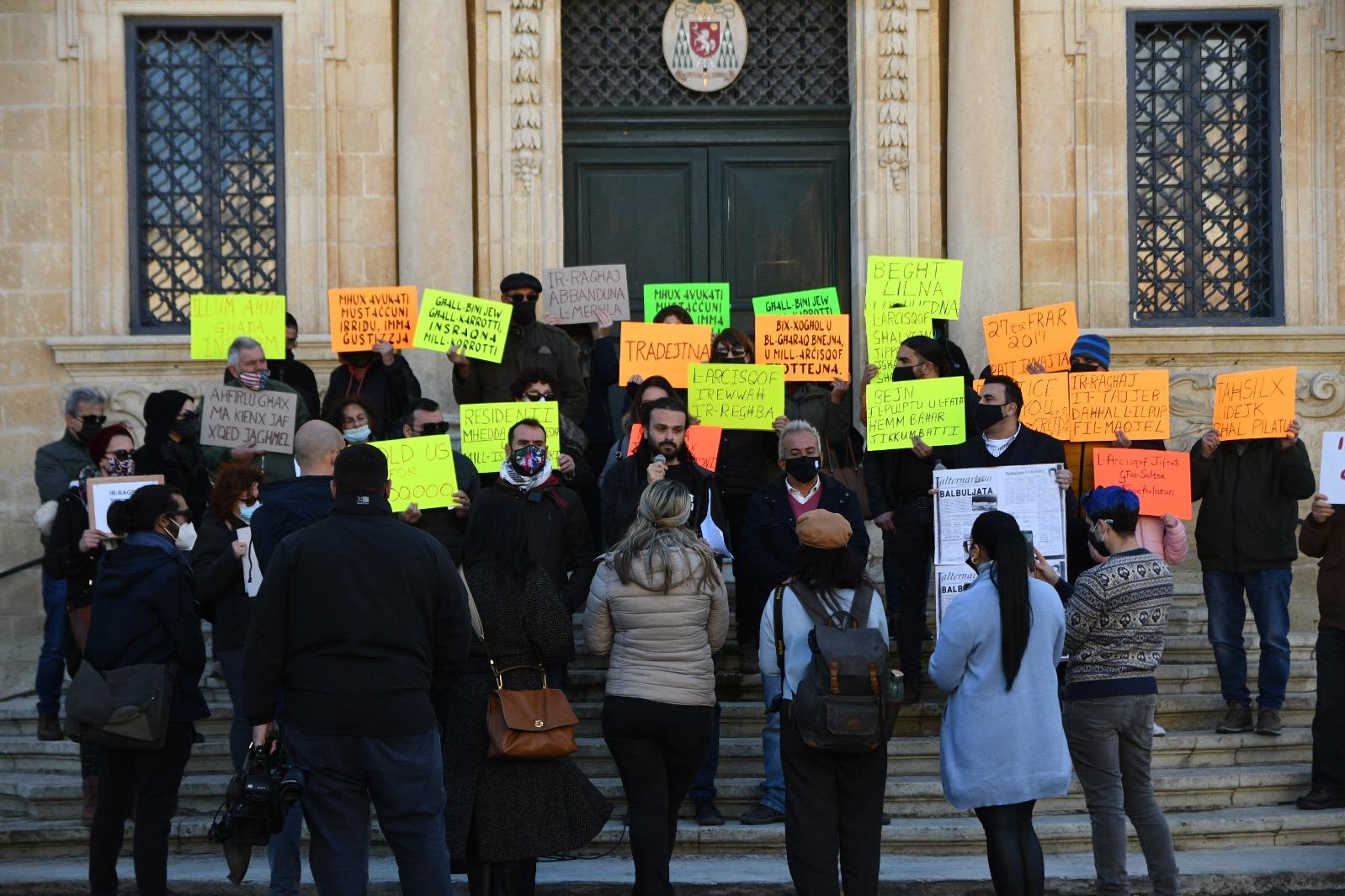 Around 30 residents and activists travelled from Gozo for the protest. Photo: Jonathan Borg

The families are being approached and told they do not actually own their property, and that they should pay money to redeem the ground rent, or else be taken to court.

The residents are now calling on the Archbishop to dismiss Patrick Valentino from rector of the Abbazia, initiate legal action to annul the transfer of Abbazia's land to private companies as well as seek legal remedies to cancel the 2017 agreement with speculators.

They say their predicament is a result of Scicluna’s decision in 2017 to appoint Valentino as rector of the Abbazia di Sant Antonio delli Navarra, “acceding to the wishes of powerful businessmen and other influential figures who had been trying to take over swathes of land in Gozo for two decades and a half”.

The Abbazia was founded by noblewoman Cosmana Navarra in the 17th century, placing land she owned under control of the foundation and giving power to the Archbishop to appoint a rector who administers these lands for the benefit of the foundation.

The rector must be a male descendant of Cosmana’s nephew Federico or, in his absence, a priest.

Netflix would film five seasons over this saga, it is so outrageous- Gozo resident

In 1992, Richard Stagno Navarra claimed descent from Cosmana Navarra and that he should be rector - but this was resisted by the Curia, who later won a court battle to confirm the Archibishop's right to appoint the rector of the foundation.

But in 2017 "a bolt out of the blue" arrived when the Archbishop accepted the Stagno Navarras’ descent claims and appointed a rector of their choice, Valentino, residents claim.

"The new rector immediately started transferring land to companies owned by the Stagno Navarras, by Gozitan lawyer Carmelo Galea and by ex-magistrate Dennis Montebello and his children, one of them also being Valentino’s partner,” NGO Graffitti said.

The residents said they were also shocked when Scicluna recently admitted in court he had never verified the Stagno Navarras’ claims of descent from the noblewoman.

Correction December 13: A previous version described the Abbazia di Sant Antonio delli Navarra foundation as 'church-run'. It is a lay foundation, with an administrator appointed by the archbishop.