Gozo, a portrait of an island
by Daniel Cilia and Iggy Fenech published by Gozo Regional Council, 2020

If you know of any book on these islands more visually stunning than this, please let me know. I don’t. This one is an almost aggressive extravaganza of colour, the fairyland where chronicle and aesthetics coincide, a tsunami of nostalgia. 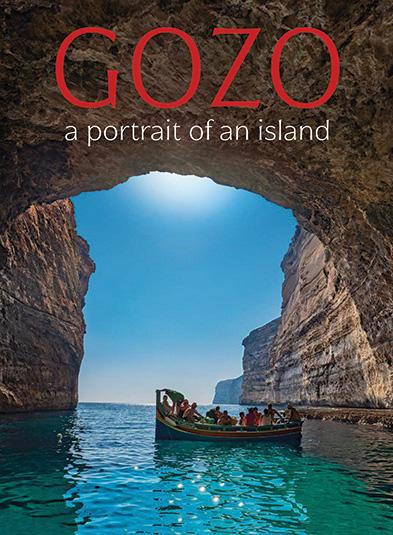 Daniel Cilia, perhaps the most prolific and creative among a rich series of creative and prolific camera artists, has dredged his seemingly inexhaustible archives of images to put together, in one cohesive narrative, the most memorable pictorial accounts of Gozo’s geography, history, folklore, passions, a destiny past and an awareness present. The portrait of an island, sure, but, perhaps more importantly, a guidebook into being Gozitan. The visual element overwhelms by far the printed word.

Deliberately sparing and economical, author Iggy Fenech banned verbosity and focussed on focus. Very little, if anything, not wholly essential was allowed to capture the narrative.

Several authors have anyway already been generous with writings about Gozo – there is certainly no dearth of valuable, reader-friendly printed works. Fenech’s words accepted to play second fiddle to Cilia’s colour symphonies. A marriage blessed by Calypso. We should feel gratified to have been invited to this wedding.

The boxed volume (and what a volume, the height stretches to almost 40 centimetres!) does not follow any formal divisions or chapters, though some clusters can be detected, like the physical geography of the island, celebrating life, trades and crafts, living Gozitans who have achieved fame (or infamy), protein and carbohydrates, festas and pageants, folklore, striking land or seascapes, externations of faith, indigenous, vernacular, domestic, sometimes assertive or magniloquent architecture, the environment – rural, a lot, urban, not so much. One flows seamlessly from the other, held together by a recurrent leitmotiv – the irresistible tyranny of colour.

Oh, Gozo is a gem of a little island! Utterly, utterly outside the orbit of the ordinary world

Cilia favours razor sharp images in primary and often saturated hues. He occasionally concedes something to my favourite, more abstract ‘fluid light’ imagery, but rarely, like some totally captivating, blurred underwater shots. I sometimes miss in his work the less belligerent, less sculptural, more neutered, dia­phanous or muddier margins of the spectrum.

An aerial view of the west of Gozo, with the Ta’ Ġordan Lighthouse visible above the low clouds.

These demonstration-standard results do not come easily. Nothing nine to five about Daniel. He lives on the lookout for natural ‘special effects’ storms, mists, monstrous cloud formations, livid seas, erratic light patterns. Poetry, for him hides everywhere and has no waking or dormant hours. You only have to be born with that extra eye.

Leafing lingeringly through this book, at least one message came through: that as much as unites the larger and the smaller island, there is equally what defines differences – subtle linguistic ones, but more strikingly, behavioural ones.

Dr Samuel Azzopardi, president of the Gozo Region, in the foreword identifies three: self-reliance, resilience and settling for basics. That’s a fair list for those who love the Gozitans (count me in), and an incomplete one for the others. These are hardly photogenic qualities translatable in visible pixels, but by the time you have gone through the book, you will include Cilia’s images with the other confirmations of these accepted wisdoms.

This project has had an obvious function, that of celebrating by colour the soul of a special island. Eric Shepherd, who loathed Malta and virtually everything Maltese, almost a hundred years ago fell under the spell of Gozo, about which he found everything charming, different, loveable – including Gozitans.

If you can live with the patronising voice of one who finds it fulfilling to be fond of his inferiors, you will take Shepherd’s eulogies as praise: “Oh, Gozo is a gem of a little island! Utterly, utterly outside the orbit of the ordinary world… The people were all pleasant and wistfully persuasive, like nice children”.

He is one of the many who recorded the exceptionality of Gozo, same as Fenech and Cilia, through a different vocabulary, do with their book.

But besides celebrating its subtle differences, Cilia’s imaging fulfils a second significant function – that of freezing for the future that which is transient and now ephemeral.

How long will il-ġostra survive, and il-presepju? Salt farming and ghoulish village carnivals? Iċ-ċuqlajta and bizzilla? These are the survivors of a culture, not solely the balm of nostalgia. I did not find a single image of kaċċa and kaċċaturi. No doubt they were omitted by accident, but thanks all the same Daniel.

Describing a publication as a coffee-table book can sometimes sound demeaning. By definition, coffee-table volumes would be those in which the visual content overpowers the literary text. Which is exactly the reason and the programme of this book.

If ever any volume deserves not to be belittled by a condescending coffee-table label, it is exactly this. The book has given a new dignity, a fresh energy and depth to the term. 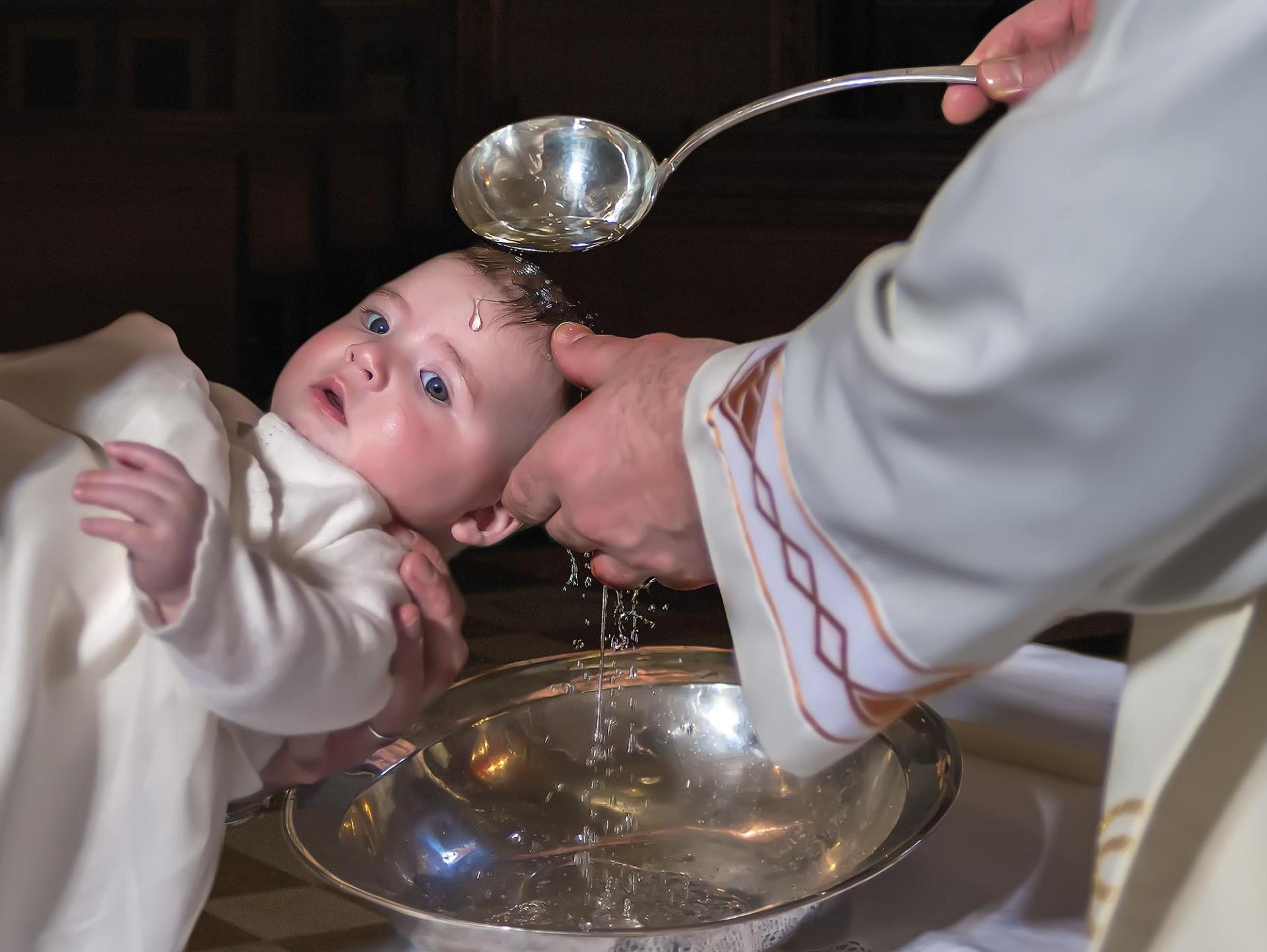 In Gozo, as in other parts of the Maltese Islands, the birth and baptism of a newborn are joyfully celebrated by parents, relatives and friends. Amelia is intrigued by the holy water poured over her head by the celebrant during the ceremony. 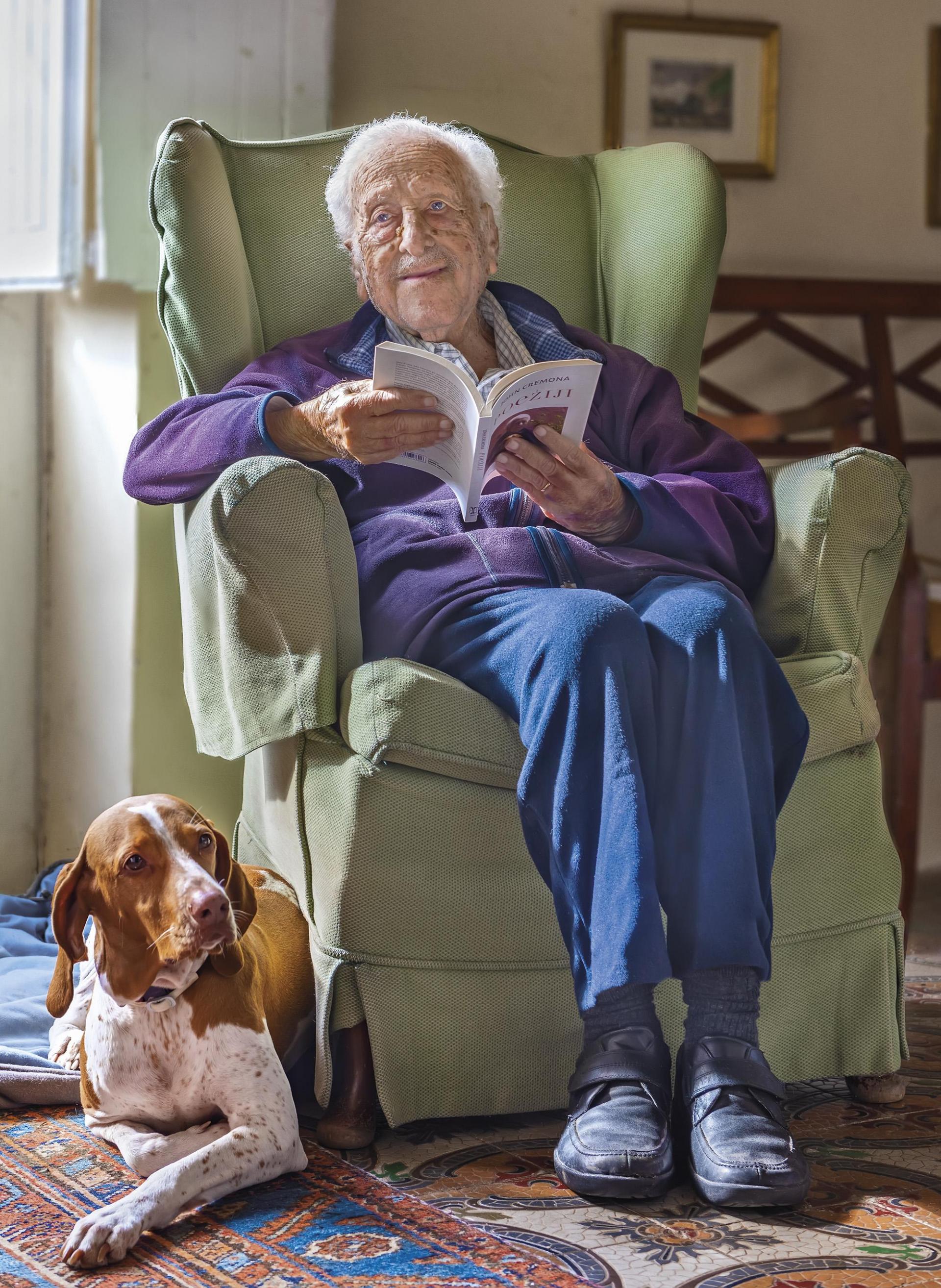 Professor John J. Cremona, KOM, KM, served as the Chief Justice of Malta from 1971 to 1981. He was amongst those who drafted the Constitution of Malta when the country obtained independence in 1964. Judge Cremona also served for 26 years as the Vice President of the European Court of Human Rights. He is the author of several books and also a poet. Photographed with Poppy (also Gozitan) at his home on 26th November 2019. 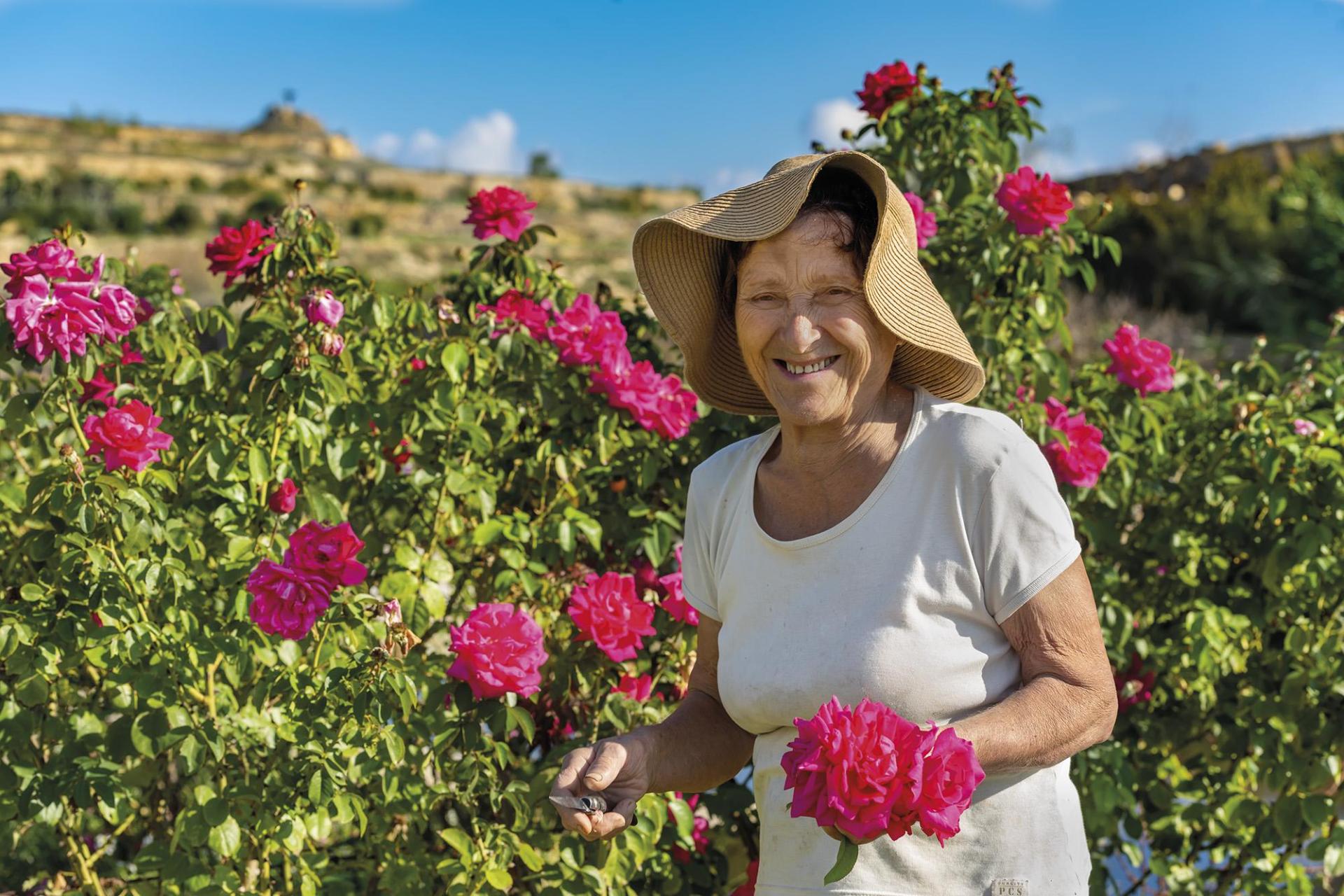 Feliċa sees to her roses in her husband’s field in Marsalforn Valley. The roses act as a partition between their field and that of the farmer ‘next door’. 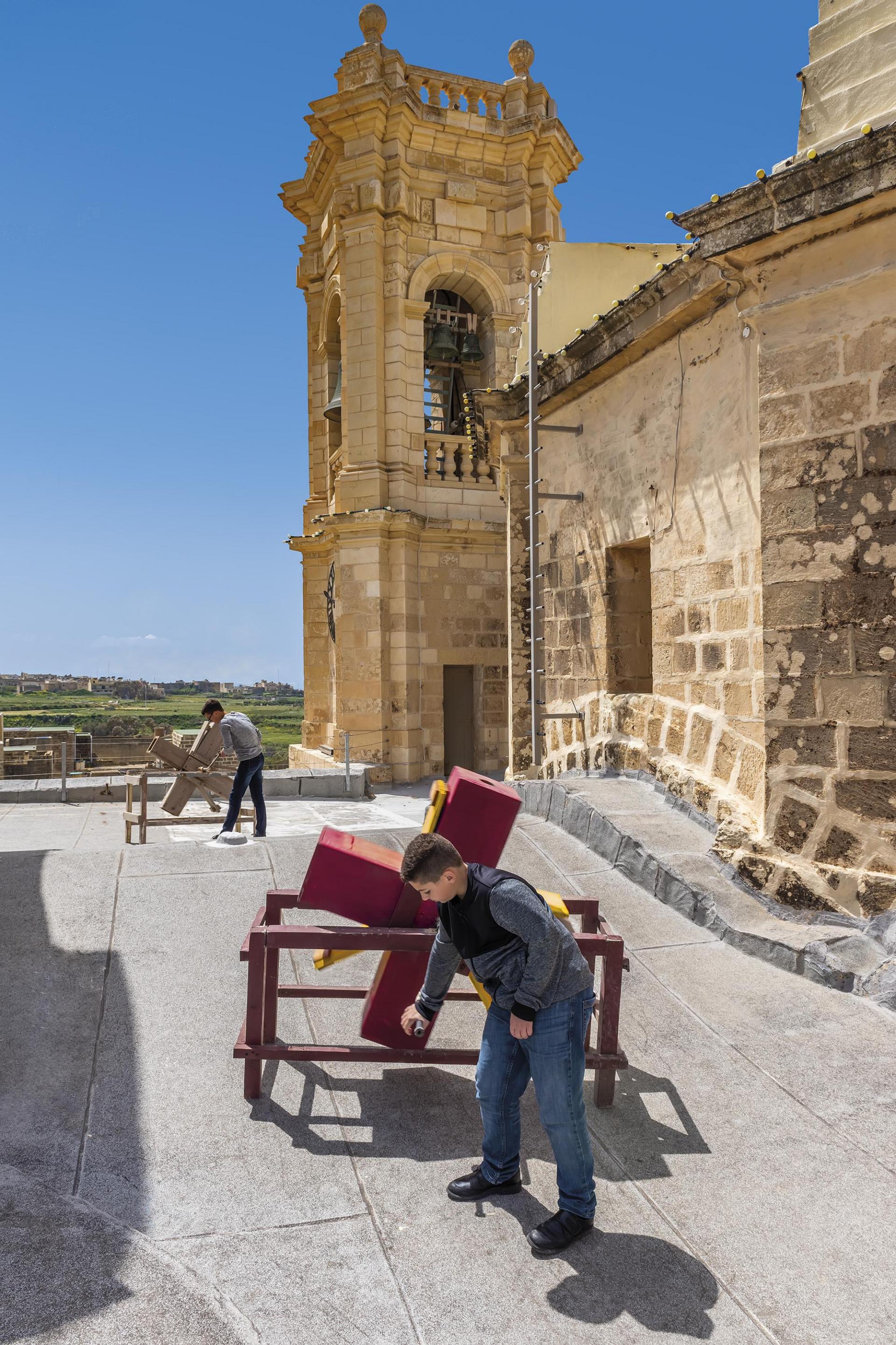 Benjamin and Carlos spin the ċuqlajta on the roof of the Għarb parish church. Bells are usually silent from Holy Thursday to the Gloria on Holy Saturday. During these days, church bells are replaced with the ċuqlajta, which is a huge wooden rattle with hinged flaps. 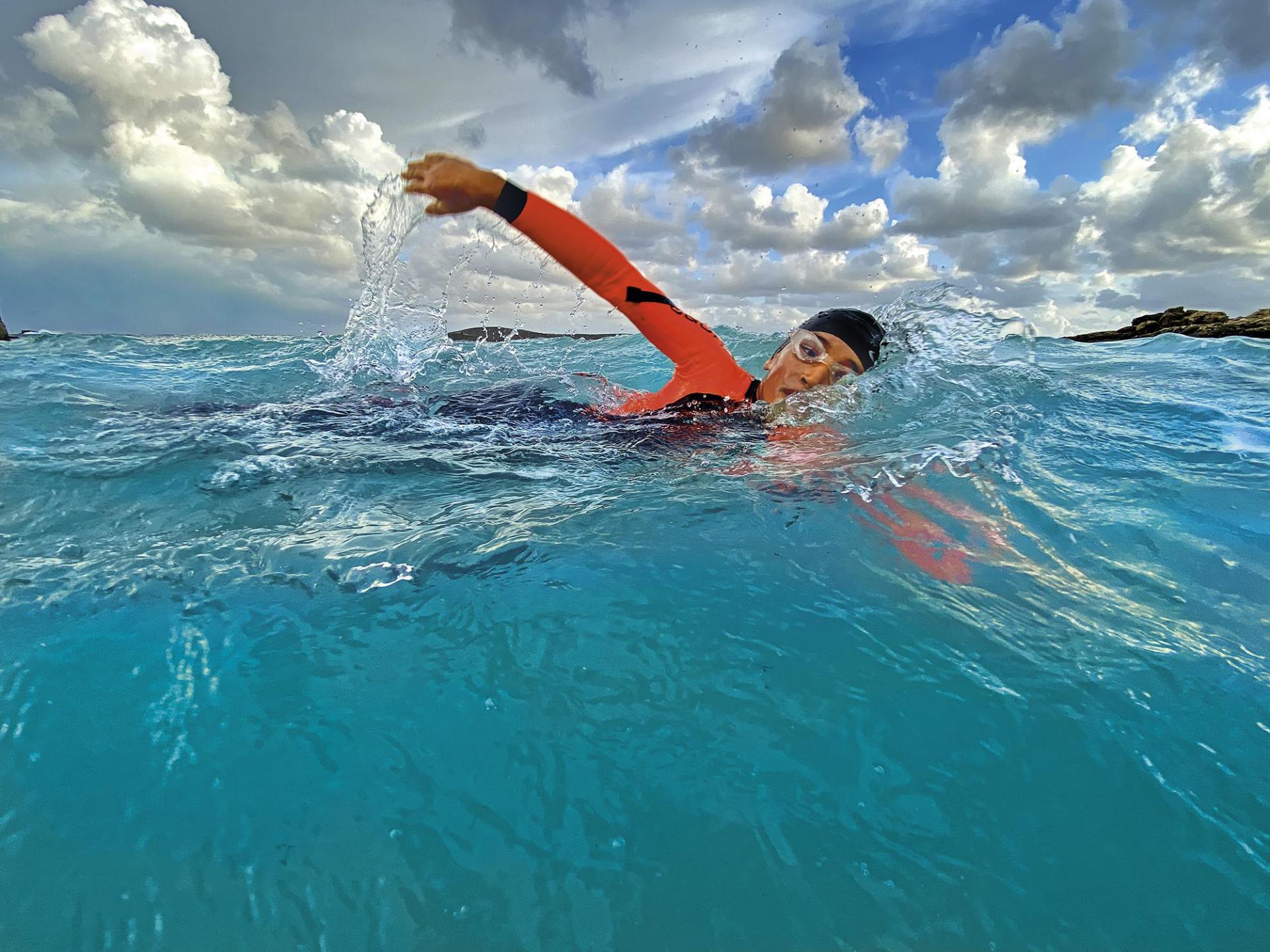 Eight-year-old Liam practises his swimming stroke. In 2019 he became the youngest person ever to cross between Comino and Ħondoq ir-Rummien Bay, a 1.8 kilometre stretch which he did in just fifty-one minutes. In 2020, he is set to swim the much longer Malta-to-Gozo channel. With these swims, Liam wants to raise awareness on the importance of keeping our seas free from plastic pollution. 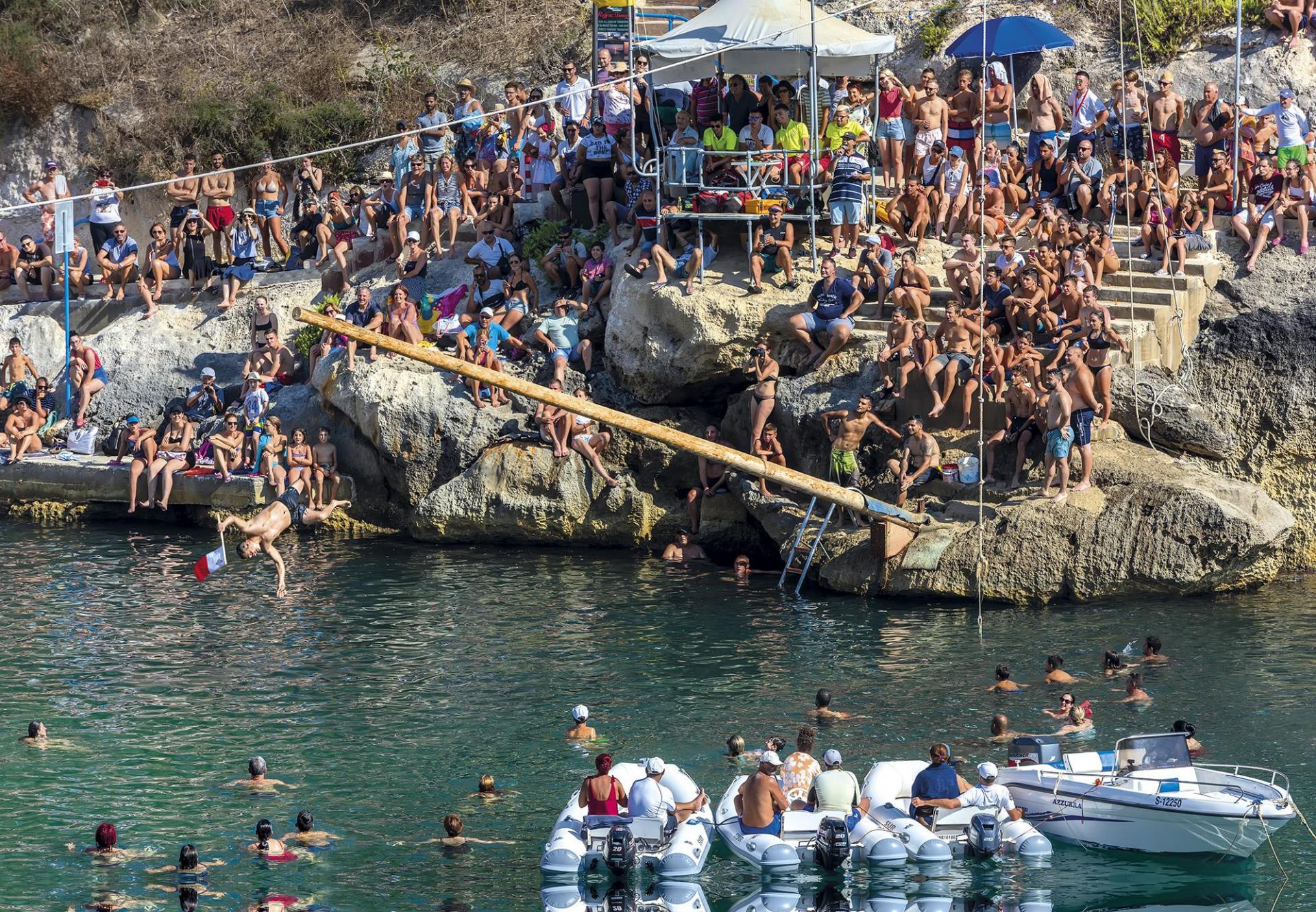 Steve wins the 2019 edition of il-Ġostra, making it his second victory in two years. The event is held during the Feast of Our Lady of Mount Carmel in Xlendi. The Ġostra is a long, greased pole leaning out over the sea. The contestants have to run along the slippery pole to snatch the flags attached at the end. 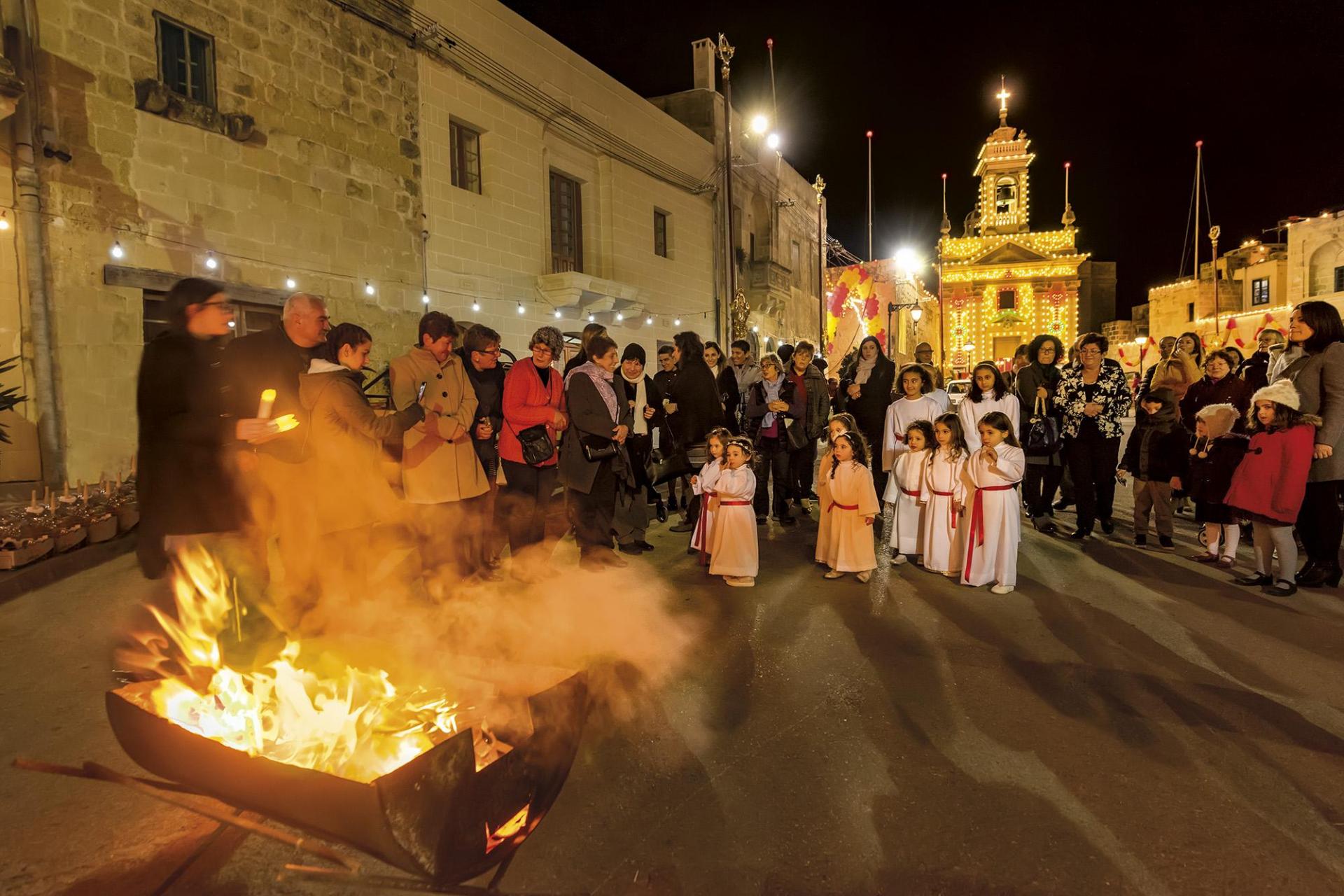 Girls from Santa Luċija, a small hamlet off Ta’ Kerċem, approach a bonfire lit in front of the church. They are given lit candles (battery-lit in the case of small girls), which they carry in a procession along the streets of the hamlet as part of a festival held in honour of St Lucy, patron saint of the locality. 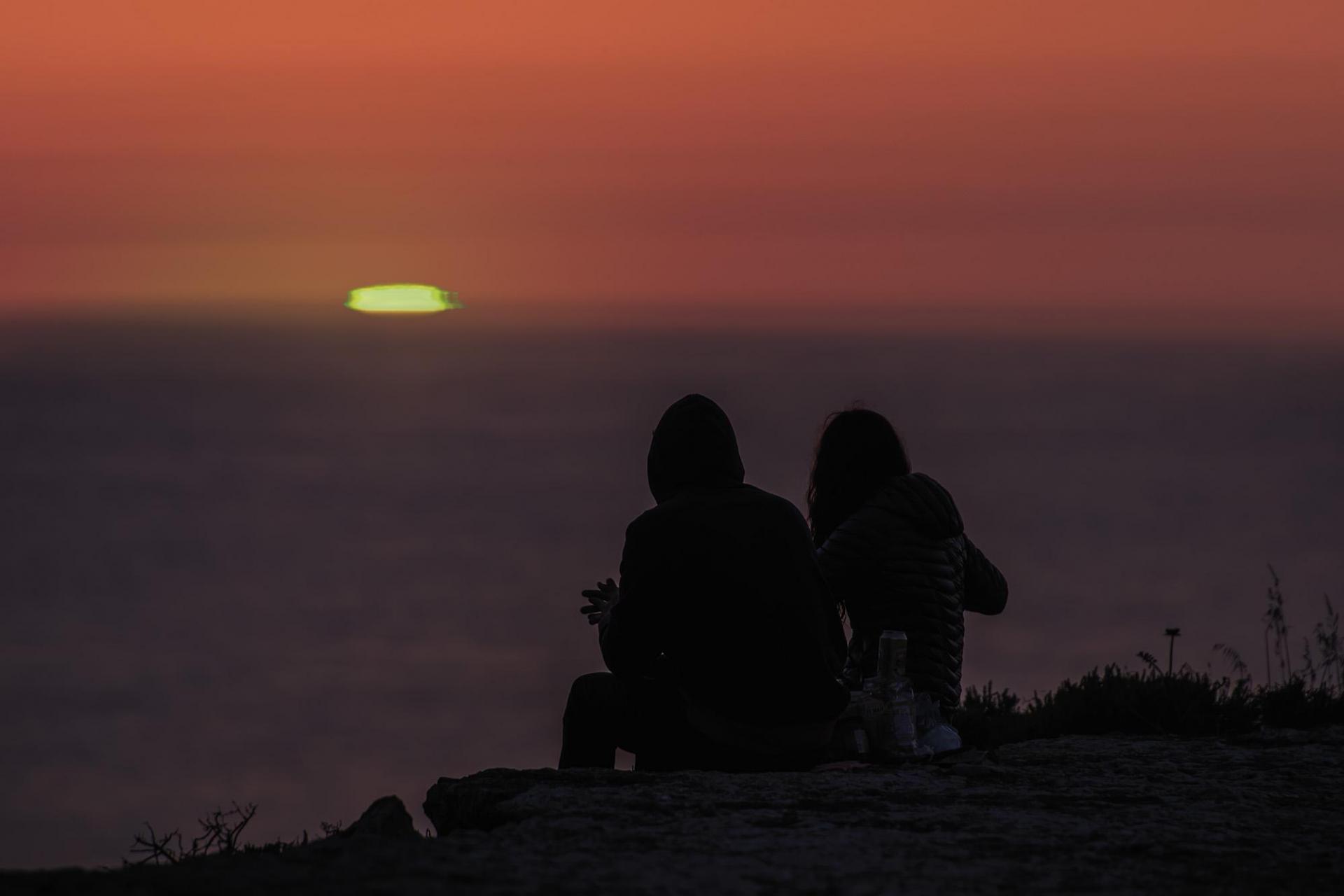 A rare green flash sunset surprises Rita and Joseph as they sit down for an impromptu romantic picnic on the San Dimitri cliffs, the westernmost point of Gozo. 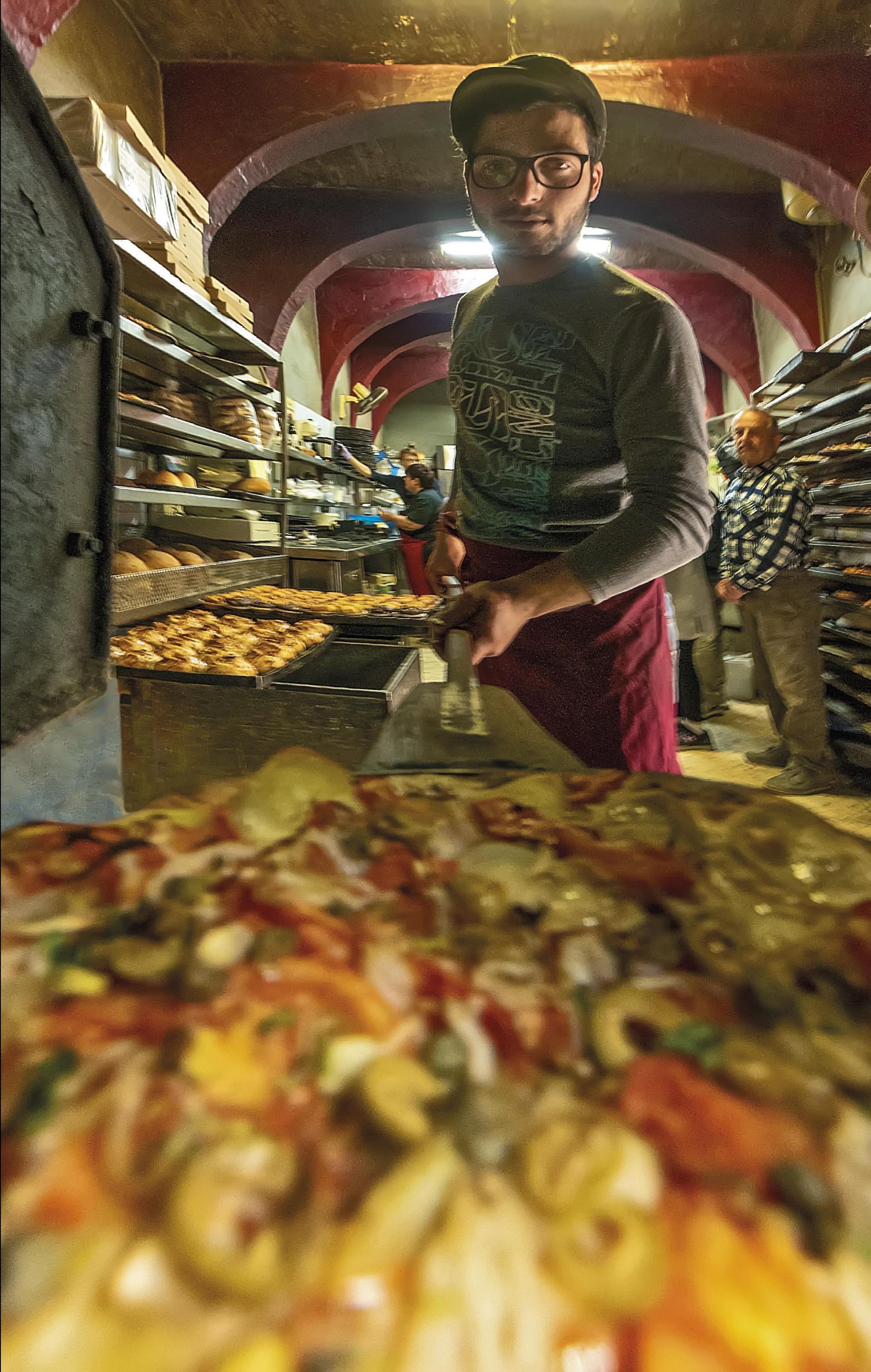 Matthew, a fourth-generation baker, takes out a Gozitan ftira – a type of pizza – from the family’s wood-fired oven. The ftira can have various different toppings including potatoes, ġbejniet and Maltese sausage. Many customers phone in to order a ftira with the toppings of their choice before coming to pick it up when it comes out piping hot from the oven. These are usually marked with a small metal button to avoid confusion. 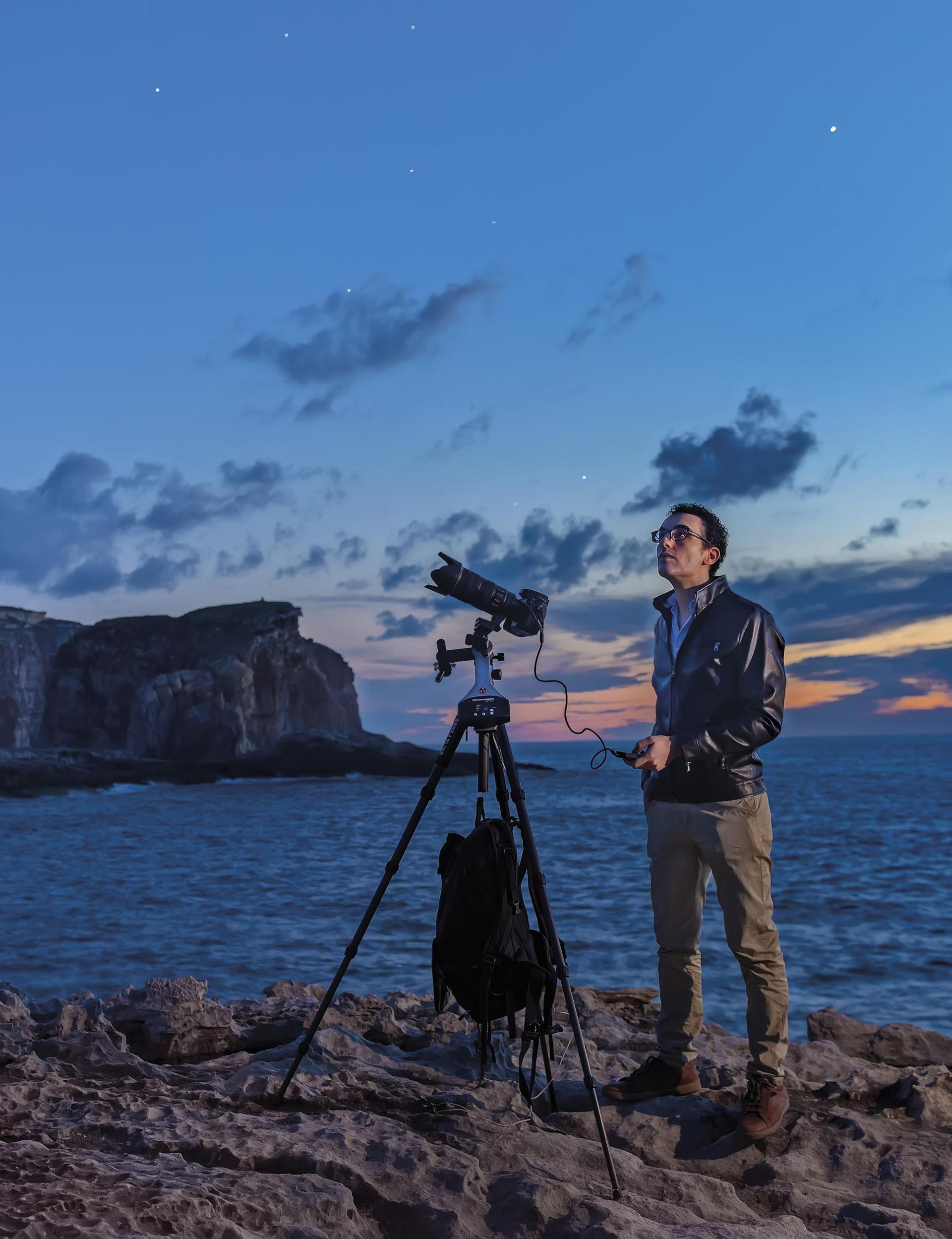 Joseph teaches Geometric Optics, Physical Optics, Advanced Astrophysics and Cosmology, as well as Philosophy of Science, at the University of Malta. His main research revolves around observational cosmology, particularly the early universe and reionisation, galactic dynamics, galaxy formation and evolution. Joseph is active in science communication, regularly speaking on astronomy, light pollution, and the importance of preserving the Islands’ Dark Sky Heritage Areas (DSHAs). He is also an avid photographer and a proficient scuba diver. 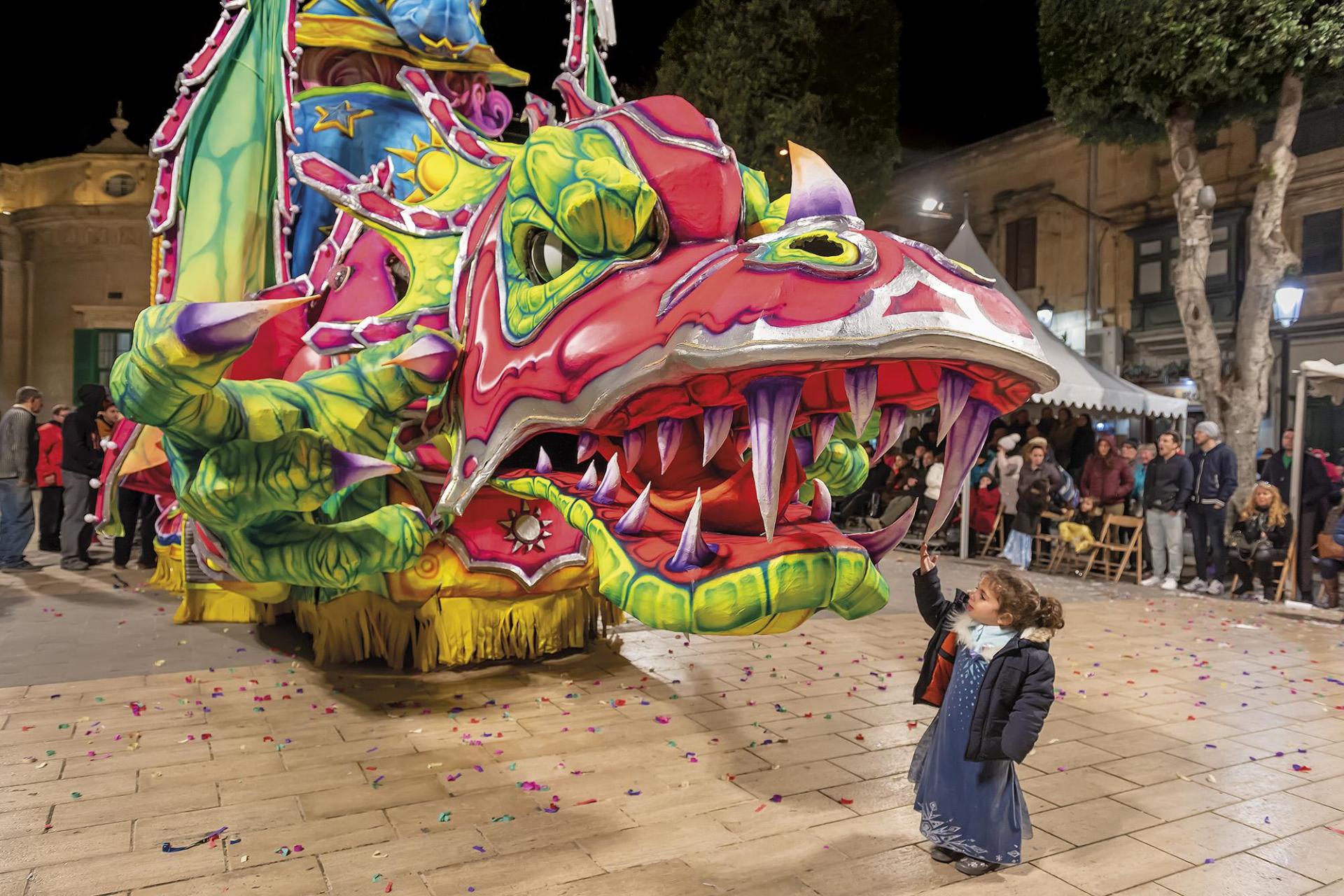 Anna checks out the fangs of the Carnival float dragon as it passes through Independence Square in Victoria (known as It-Tokk) during the official Carnival parade.