Harboured, as a title for an exhibition, could subliminally direct the viewer to different interpretations. SARAH CALLEJA talks to Joseph Agius about her current exhibition at Mqabba’s Il-Kamra ta’ Fuq.

JA: The term ‘harbour’ can be used both as a verb and as a noun. The title of your exhibition Harboured, in the past tense, works on many levels. The title evokes a sense of safety, of protection, of enclosure. However, the verb can be used in another context – that of rumination, of keeping inside, to retain and nurture. At first glance, your choice refers to the first definition. In the exhibition’s mission statement, it is stated: “Sarah Calleja’s grandmother’s stories from WW2 and the most awaited convoy of Santa Maria is her earliest nostalgic me­mory of the Grand Harbour”. Does ‘harbouring’ and ruminating on these anecdotes also factor in the choice of title?

SC: The subject of the exhibition, which is that of works inspired from the scenes along the shores of the Grand Harbour, was chosen prior to the name. I paint outside and, for some reason, I kept returning to this area. I knew that the works needed to be varied, showing both the industrial and urban but, most of all, I desired to evoke that special feeling of the place that I cannot put into words. I did some research to find if there is a defining word used historically which seemed fitting as a title; however, it was when curator Melanie Erixon sent me a list of possible titles that I knew I had found the title for the exhibition. 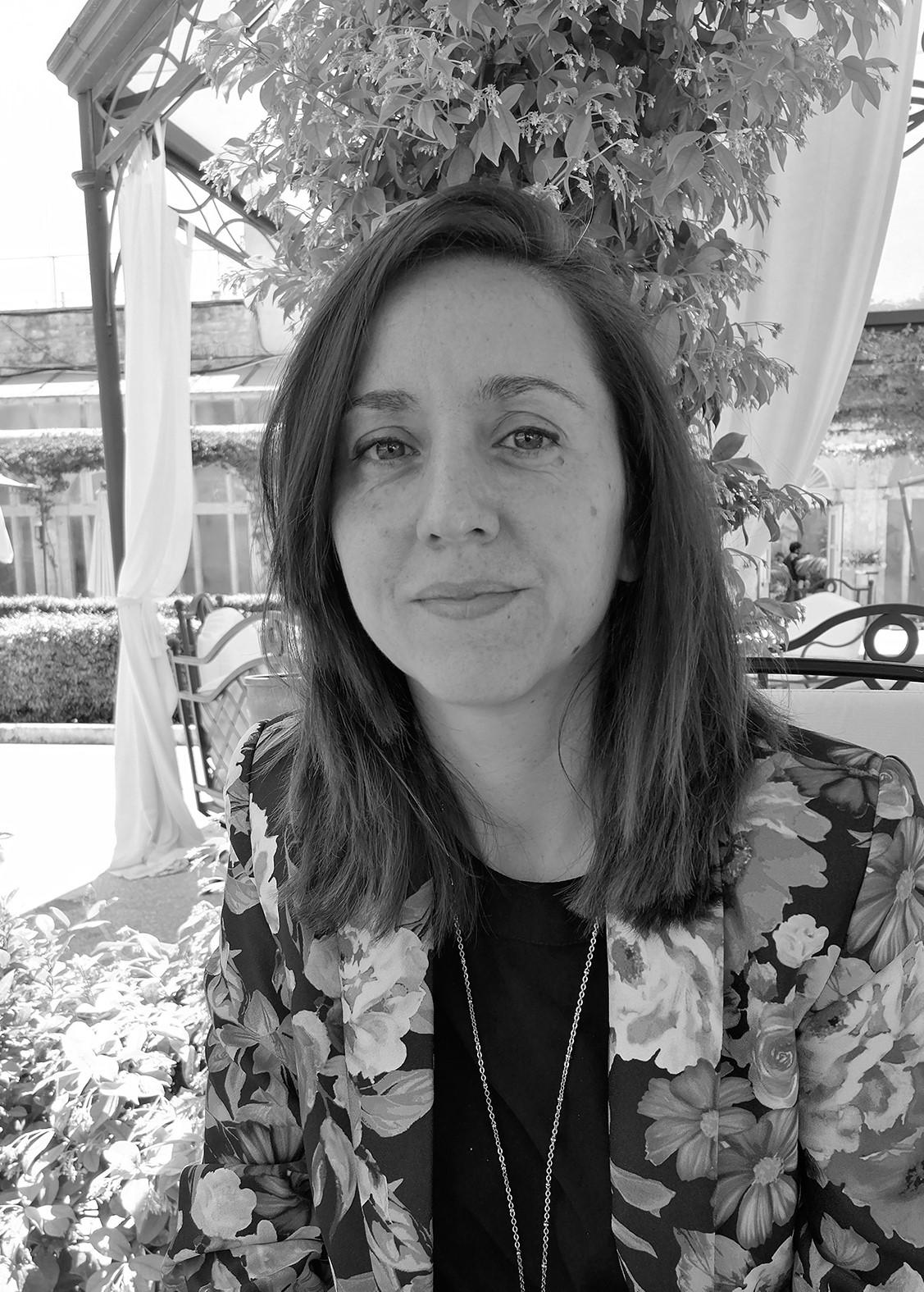 I would like to point out that the works vary in size. The larger works are stretched paper on stretchers. There is also a variety of mediums and while the main body of works is in watercolour, I have also worked in oils and with pigment on paper.

JA: Usually, Sarah Calleja is synonymous with en-plein-air paintings of our island’s great outdoors. The art-loving public has become accustomed to your deft handling of the watercolour medium with works that sometimes border on the abstract. Sometimes, you team up with colleagues and go on painting expeditions. This collection of paintings perhaps shows another side of you – a safety in the harbour of solitude, of introspection, away from the crowds. Is this the case?

SC: Well, this is an exhibition of works that were carried out in the past three years and, as we all know, COVID struck and our plein air group came to an end like many other things. I still venture out to paint early on Saturday mornings, sometimes in the company of another artist or two; however, in the past months I purposely visited sites in search for composition, subject and themes for the exhibition, sometimes starting a sketch on location which I would develop later in my studio.

JA: The palette, sometimes monochromatic and dramatic, at others chromatically restrained, adds to the timelessness of the pieces. You concentrate on the body of water of the harbour itself, the architecture, the boats – what essentially defines a harbour. Are you documenting a ‘now’ as an aftermath of a very colourful and, at times, violent history? Is this like a settling of waters in an area that has been the backdrop of many historical episodes that are too numerous to mention? Is this what essentially remains, despite everything?

SC: As an artist, I steer away from creating a photo or a postcard. It is perhaps for this reason that I have explored a monochromatic expression for a number of years. I am drawn to tonalism, or monochromatic. Water is present in each painting as it is the Grand Harbour that brings these paintings together, but it is not always the main subject.

I think this exhibition is a documentation of now. There is no reference to the romantic-scene composition of the paintings of the 19th century that we are accustomed to: the Grand Harbour with galleys and luzzus along the shore. We no longer have the need to show the activity in the harbour, it’s only a click away, after all.

My main focus is to create mood through my painting, eliminating what is pictorially unnecessary and making sure that each piece works via its composition and colour. While the backdrop remains the same, some works draw the viewers’ attention to details sometimes unnoticed within the Grand Harbour. 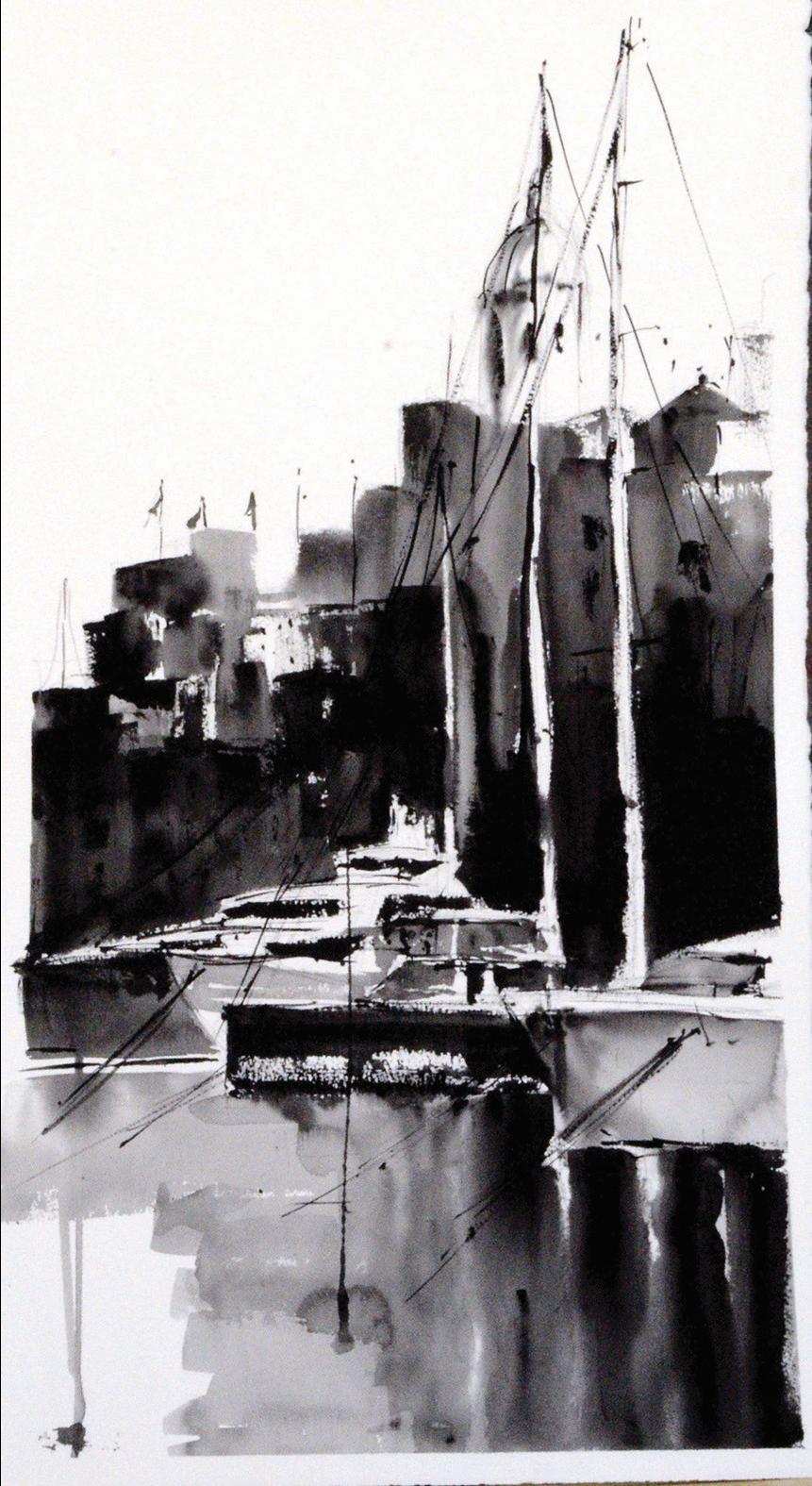 JA: Quoting from the exhibition’s mission statement, “The chemical composition of the pigment allows some colours to travel faster through the water, sometimes breaking up into their constituent colours”. The medium emulates the fluid qualities of the theme, fluid also as a soulful outpouring of emotions and memories. Maurice Sendak, the late author and illustrator of children’s books, once referred to the watercolour medium thus: “It’s my way of stirring up my imagination to see what I find hidden in my head.” Does this transient medium work in the same way in your case, leading you to a subconscious outpouring?

SC: I think the above is true when I am searching for a new idiom or sketching in preparation for a new painting. I do a lot of experimentation in small sizes and sometimes they lead the way to a painting. In Harboured, I am exhibiting five of the bozzetti that were carried out; the sketches were then developed into large-scale works which also are being exhibited.

While the fluid qualities of watercolours may lead to some happy accidents, I think most of the work is created when I am confident and in full control of the medium. Although the work appears loose, the markings are quite intentional. In watercolour, the most important colour is the white of the paper and, once this is covered, it will never reflect light in the same way. As regards the finished works, I do work with large brushes and water sprays of different sizes, but I guide the paint to do what I want to it to do. Sometimes it obeys. 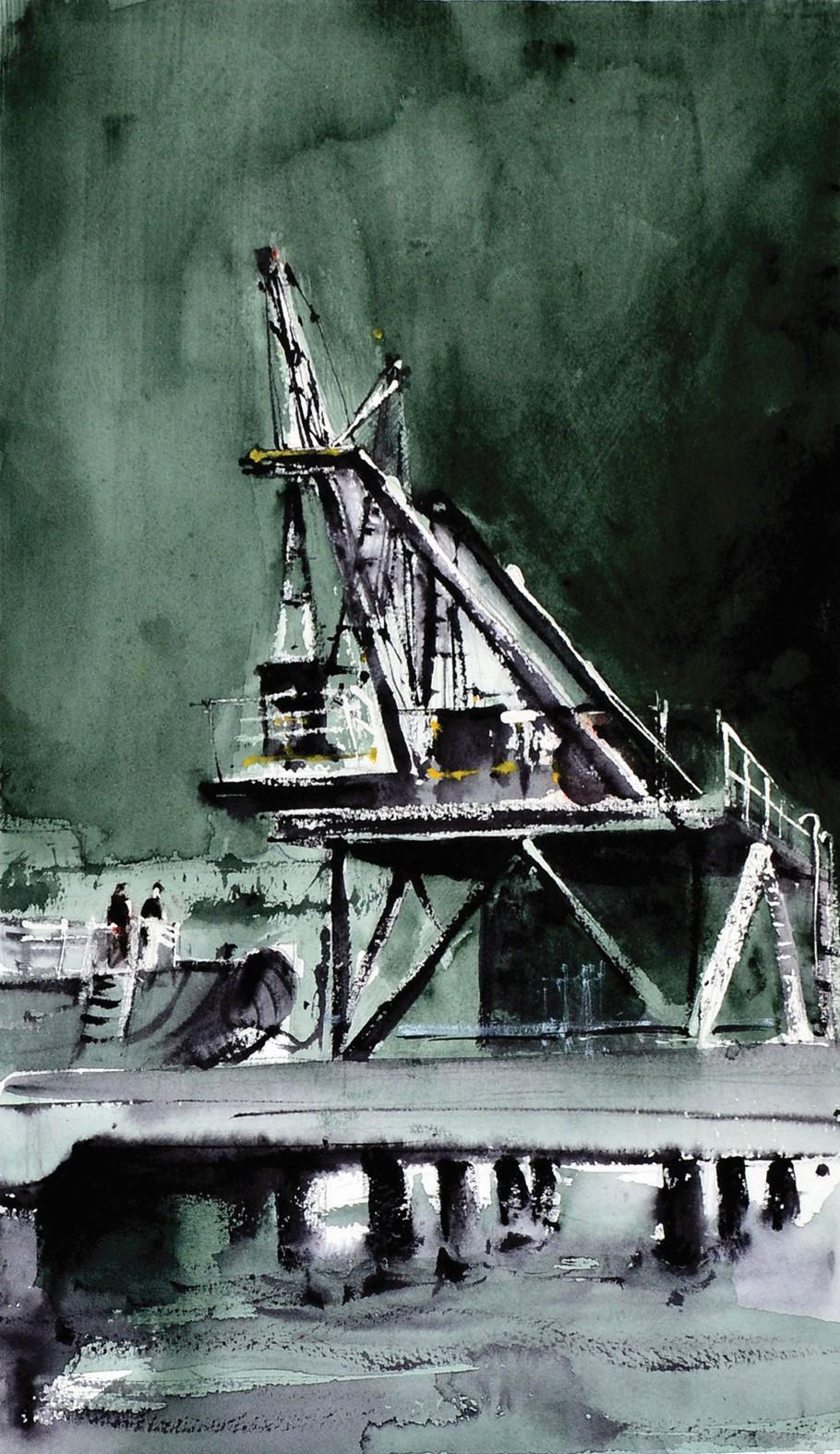 JA: There are many artists who portrayed the Grand Harbour and its environs in the past. One can mention J.M.W. Turner and Carlo Carrà among the big names of global art history. The Schranz and Gianni families of artists, L.M. Galea and Vincenzo d’Esposito in the 19th and early 20th century represented quite realistically the goings-on in the harbour amid mercantile activity, the Royal Navy, the ship repairs at the dock yard. Although the harbour nowadays is the scene for cruise liners and ships are still being repaired in the docks, you strike me, unlike your predecessors, as having focused on details, on excerpts, rather than on the bigger picture. The solitude of these works is accentuated by the absence of humanity. Does concentrating on slivers add to the poetry of the pieces? Is the bigger picture distasteful?

I set out to paint at around 6am, so the environs are usually quiet by virtue of this. But I do enjoy the solitude; it is the weekly time I am alone with my thoughts working on something that I truly enjoy. My phone is usually on silent or in the car, and there are no kids around.

There are people only in two of the paintings. One of these, Il-Moll tal-Faħam 2, portrays people on a boat which, at that time, they were temporarily occupying. The other, Dock 1 in Bormla, shows people who are almost always present in this area, and thus they had to be included. 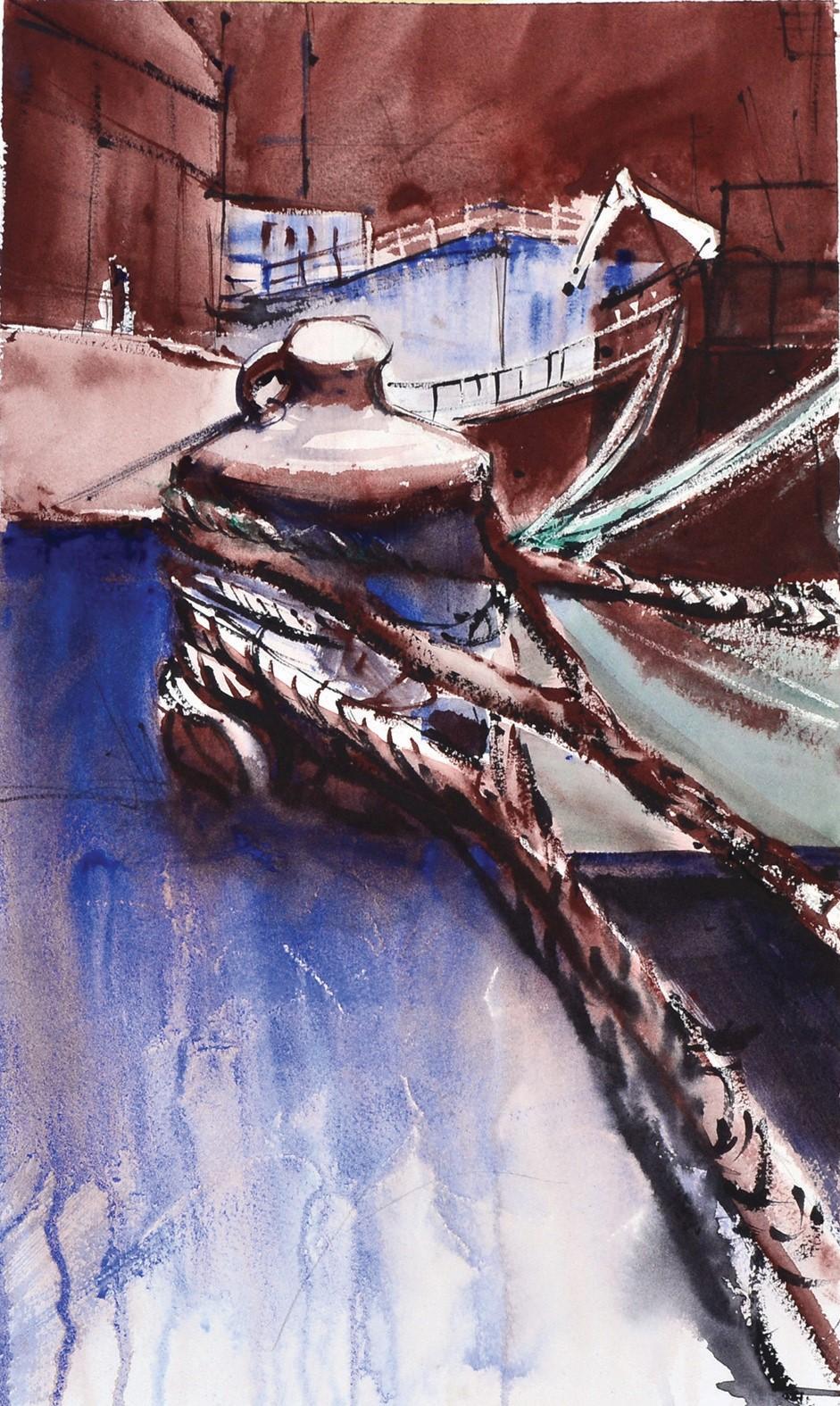 In no way do I feel that the bigger picture is distasteful; quite frankly I could easily paint works for another exhibition with the same theme. Wherever I look, I see a new painting. In the painting Grand Harbour, it portrays the general vista from St Barbara’s Bastions. There is distance separating me from the subject itself; it occurred to me that this was the best composition for this particular painting. I have however painted in the same location and zoomed in on Fort St Angelo. It is a question of aesthetics.

I spend a lot of time developing the painting’s composition. I had started off this collection by placing pins equidistant from each other on the shores of the Grand Harbour, thus making sure that I portray the whole harbour, in an attempt to bring less cherished and less popular parts of the Grand Harbour to life.

Harboured, hosted by Mqabba’s Il-Kamra ta’ Fuq and curated by Melanie Erixon for Art Sweven, is on until August 15. Consult the event’s Facebook page for opening hours.