Alfonso Greco hopes to hit the ground running after returning for his second spell in charge of Sliema Wanderers.

The Italian’s appointment had been a foregone conclusion after it emerged that the senior players in the Sliema squad had encouraged the club’s hierarchy, spearheaded by president Keith Perry, to hand the job to Greco following the dismissal of Stephen Azzopardi last week.

“Everyone knows that I enjoyed my time in my first spell as coach of Sliema Wanderers,” Greco told Times of Malta yesterday. 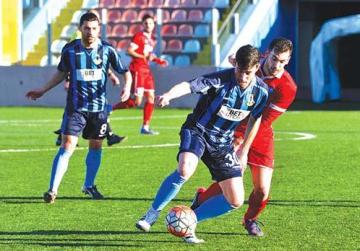 “I have maintained a very good relationship with the club and I’m glad to be back.”

Greco had taken charge of Sliema for the first time in the summer of 2012 but lost his job just over two years later after a disappointing run of results. His return to the helm of the Blues represents an amazing role reversal as Greco has taken over from Azzopardi who had replaced him in October 2014.

Under Azzopardi, who has retained his role as the club’s technical director, Sliema have struggled for consistency in the Premier League but have reached the quarter-finals of the FA Trophy where they will meet St Andrew’s on April 19.

Greco, who was in charge of Sliema when they lost 1-0 to Valletta in the final of the FA Trophy in season 2013/14, is relishing the prospect of steering the Blues to another final but is also keen to improve the team’s fortunes in the championship.

“The FA Trophy could be an important objective,” Greco said.

“The quarter-final represents a good opportunity to advance in the cup but we can’t think only about the FA Trophy.

“The championship is also very important and my aim is to try and improve the team’s position.

“We need to consolidate the good aspects but work hard to address those areas where Sliema have not done well this season.

“My objective is to take one game at a time.”

A 1-0 victory over Tarxien Rainbows helped to lift the gloom as the Wanderers snapped a five-match losing streak to leapfrog Pembroke Athleta in the standings into seventh place, level with Mosta on 15 points.

Sliema have made several changes to their squad since Greco’s first spell came to end in 2014 while the rise in the number of foreigners from five to seven has significantly changed the complexion of the Premier League.

Greco was at the Tedesco Stadium when Sliema beat Tarxien Rainbows with a Johann Bezzina strike but insisted that one game is not enough to assess the team’s potential.

“I saw the game on Saturday but you can’t make a definitive judgment on the team after one game,” he observed.

“Granted, we don’t have a lot of time to turn things around but hopefully I will adapt straightaway and I also hope that the players feel comfortable working with me.

“What I can say is that the team left a good impression on Saturday.”

Victory over the Rainbows was achieved under the guidance of caretaker coach Ivan Woods who will now revert to his previous role as first-team assistant coach.

“I know Ivan well as he was a Sliema player when I was in charge of the team.”

Greco believes that his knowledge of Maltese football will stand him in good stead.

“I’m familiar with the environment (at Sliema) and I know many players,” Greco said.

“I see that as an advantage.

“Furthermore, I’m no stranger to Maltese football know and, besides Sliema, I have also experienced different realities here after my spell as coach of Żebbuġ.

“I have more experience and I hope to apply that for the benefit of Sliema.”

Greco had been out of work since leaving his post as coach of Żebbuġ Rangers at the end of last season but his return to Maltese football had been widely anticipated as, apart from Sliema, he was also linked with other clubs this term.

The 46-year-old, who has signed a short-team deal with Sliema with an option to extend at the end of the season, said that he decided to bide his time before returning to coaching.

“While I was in Italy, the proposals I received didn’t really appeal to me,” Greco remarked. “I took the opportunity to watch some games and training sessions as I preferred to wait for the right offer.”

Greco is facing a daunting start to his second stint as Sliema coach as his first match in charge will be the Old Firm derby against Floriana this Saturday.