An Athenian "neo-muralist" is blending Greek mythology and Byzantine iconography with graffiti and street art to depict how the coronavirus has forced people the world over to put down roots.

From Bangkok to Rabat and Zurich, Fikos has painted the walls of many cities, but he's now adding a splash of colour to the sun-beaten facades of the Cypriot capital Nicosia.

"Here in Cyprus, there are not many murals yet," he says. "It's the beginning phase of the street art scene in Cyprus, so... they are impressed and kind of awed when they see this happening."

The 33-year-old spends time wandering the narrow back alleys of Nicosia's Old City in search of walls to use as a canvas. 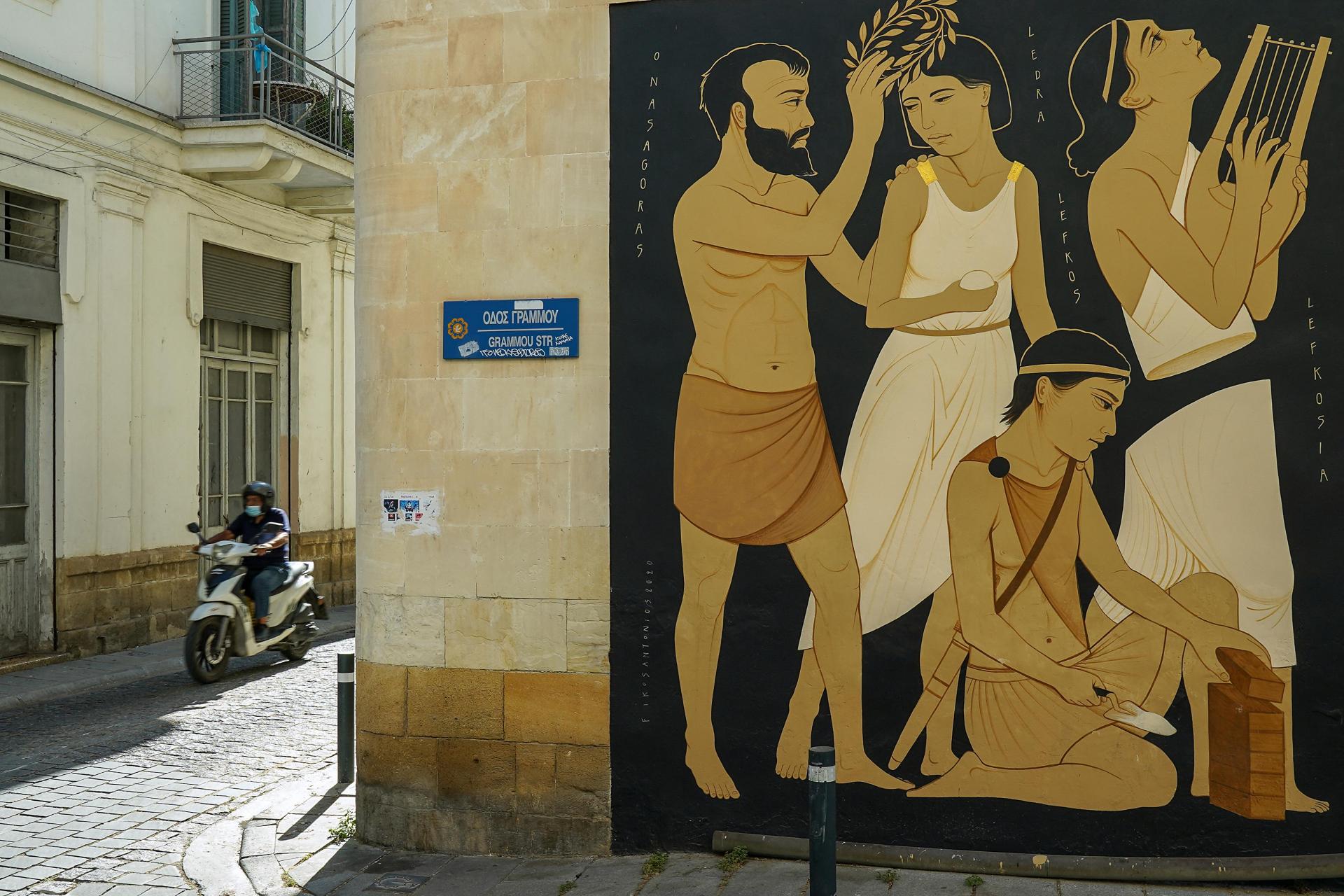 Fikos is blending Greek mythology and Byzantine iconography with graffiti and street art to depict how the coronavirus has forced people the world over to put down roots.

The one he chose for his latest project is the cracked veneer of a crumbling mud-brick house in an abandoned, dusty lot near the UN-patrolled buffer zone that divides the city's Greek and Turkish-speaking halves.

The Greek artist, who describes himself as a "neo-muralist", says he has been living on the Mediterranean island for the past year amid the COVID-19 pandemic, a theme reflected in his latest piece.

Standing on a wobbly platform, he gets to work with a brushstroke along the brow of Amaracus, the perfume-maker of the mythical goddess Aphrodite, whose fate he says befits life in the time of the coronavirus.

Bit by bit, a sketch evolves into a jade-green male figure with leaves sprouting from his head, branches protruding from his chest and roots extending from his legs.

Fikos has painted the walls of many cities, but he's now adding a splash of colour to the sun-beaten facades of the Cypriot capital Nicosia. Video: David Vujanovic/AFP

"He got punished by the gods and got turned into a plant or flower," says Fikos, who explains that he used the story from Cypriot mythology as an analogy for the pandemic, during which people "have grown roots" by staying in one place for so long.

Fikos says Cypriots have taken to his artwork, unlike others who tend to attach to it the stigma of graffiti.

His works now adorn five facades on the Greek-Cypriot side of Nicosia, which has been divided on ethnic lines since communal unrest erupted in 1963-4.

Fikos says he draws from a varied palette of influences, from art in ancient Greece to Egypt and Japan. One such artwork is located near the Green Line that divides Nicosia.

It shows King Onassagoras, who ruled the kingdom of Ledra around 672 BC, next to three female figures – one of them Nicosia, depicted as a woman split in half. 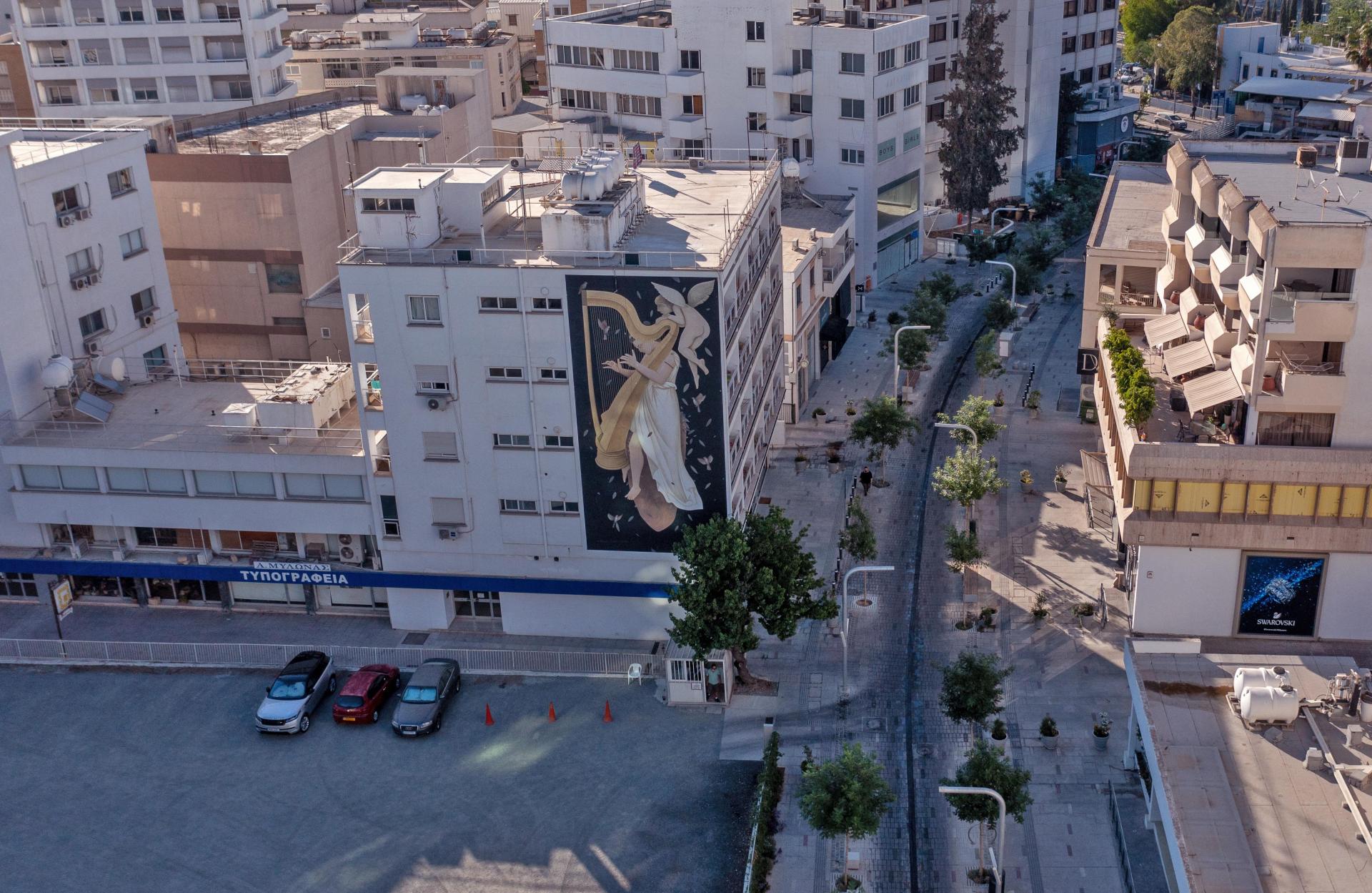 A mural on a building on Stasikratous Street, a major shopping area in the centre of Nicosia.

"I studied Byzantine painting since I was 13 years old in Athens, and I studied the art of the street in the streets," says Fikos.

"Street art has evolved from graffiti and it has different rules. You must leave your stamp," he says.

"But my point of view is totally different. I'm always trying to adapt my sketch to the environment and get inspired from the colours of the neighbourhood. My approach is more like fine art, I'd say."

Fikos says in the past he was unable to convince Athenians to let him paint over the garish graffiti that blankets the city, even for free.

But now his appeal is growing both at home and abroad, and he gets paid for his work.

Fikos says he has been commissioned to paint murals in many countries, including France, Ireland, Mexico, Russia, Serbia and Ukraine.

They can cover entire facades of buildings as high as 17 storeys, like one in Kiev, yet they aren't overbearing and don't look out of place. 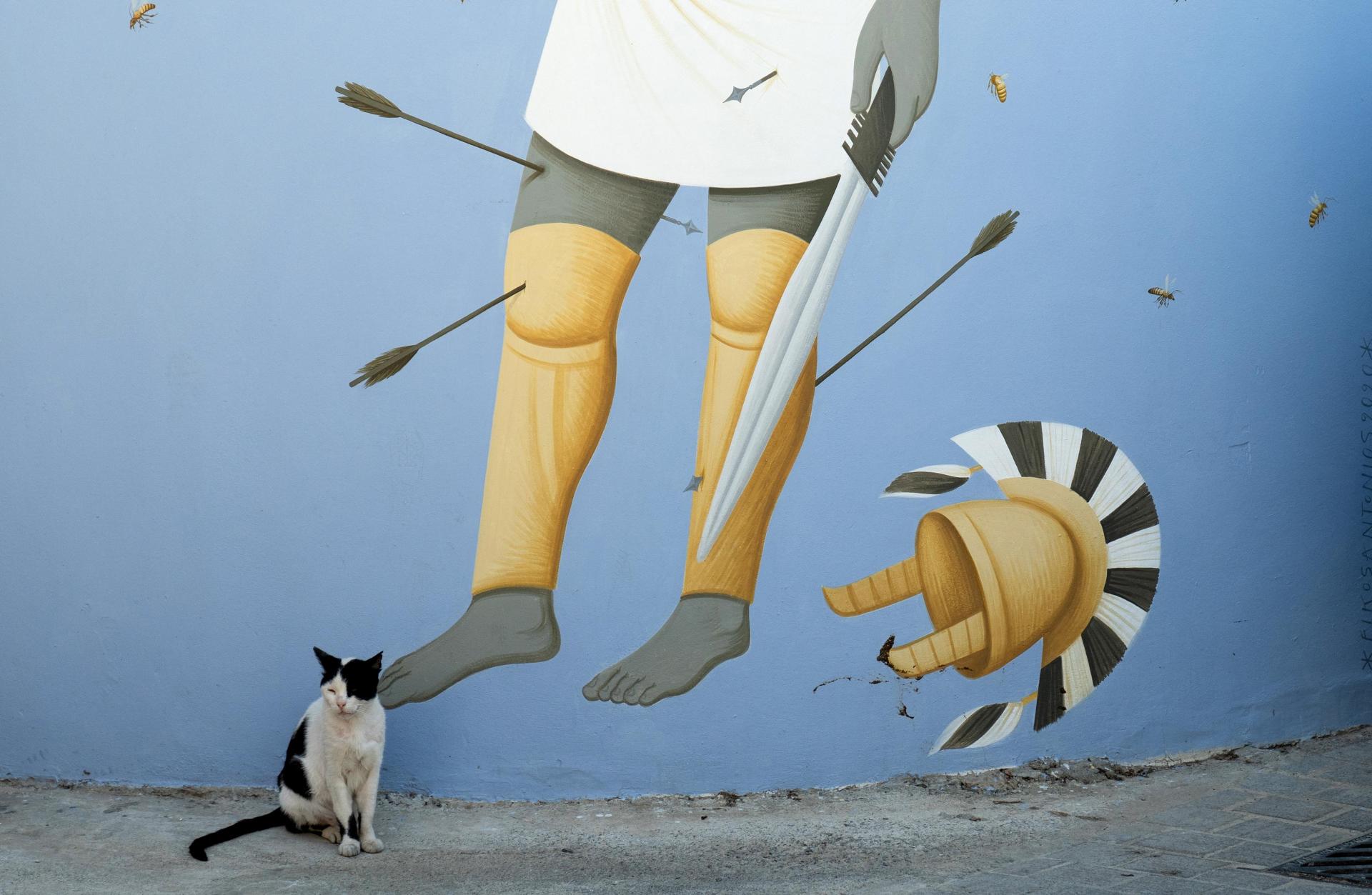 A cat sits next to one of Fikos’s murals.

"Most of the time they have something in mind, they give me a theme," Fikos says of his commissions.

"But... I do my research on history, mythology or whatever I find appropriate, then I sketch and I start to paint."

Once the research is done, the process of painting the murals can take just two or three more days, he says.

"I'm mostly inspired by Greek mythology, because I trust that if these myths have survived, they must have something to say."