In a hard-hitting piece in the Times of Malta today, columnist Martin Scicluna, head of the Today Public Policy Institute, argues that environmental NGOs and civil society must be prepared to conduct “guerrilla warfare”.

The former executive president of Din l-Art Ħelwa said: “Why should members of the public not be urged to boycott the business outlets of the Gasan and Tumas Groups? Why should [architects] Martin Xuereb and Ray Demicoli not be banned from Din l-Art Ħelwa’s award for architecture?”

The Gasan and Tumas groups are behind the four tower blocks planned for Mrieħel, which were granted a permit by the Planning Authority a fortnight ago.

Gasan is also the developer of the 38-storey Townsquare building in Sliema, also approved by the PA two weeks ago.

Mr Demicoli is the architect for the Mrieħel project, and Mr Xuereb is responsible for the Sliema high-rise.

Mr Scicluna says that it is “saddening” how the two “architects of quality” could lend their names and reputations to what he describes as “glass and concrete stumps”.

His piece, entitled ‘Barbarians at the gates’ takes to task Prime Minister Joseph Muscat and likens him, along with developers, their architects and the Planning Authority, to Attila the Hun at the gates of Rome.

“High-rises… [are] vanity projects unworthy of a Prime Minister who was elected to office promising ‘to protect environmental standards… because our children deserve this’,” Mr Scicluna writes.

The Nationalist Party also comes in for criticism for its decision in government 10 years ago to extend development boundaries, calling it “a political act of calculated vandalism” to appease greedy developers.

“The consequences of that decision haunt Malta to this day,” he says.

An appeal for a boycott was also made yesterday in an online comment from long-standing Friends of the Earth campaigner Edward Mallia.

Dr Mallia was reacting to a story on the Times of Malta website about bumper stickers taking a dig at politicians and the construction industry.

He said the proposers of the Mrieħel and Townsquare towers sold various products and he wondered whether there was any group of people who felt enough revulsion to organise a boycott of such products.

“There are alternatives, and this is a free market. Developers will only respond to kicks in their pockets,” Dr Mallia said.

This latest bout of dissent against high-rise development follows the vociferous opposition by environmental organisations and residents to the first two projects approved under the new planning policy, which determines where and how skyscrapers can be built.

Concerns range from the impact the tall buildings will have on the skyline to the pressure they will place on existing road, sewage and water infrastructure.

On Sunday, Opposition leader Simon Busuttil came out against what he described as the “Dubai-ification of Malta”.

The PN representative on the PA board voted for the high-rise policy approved two years ago and against the towers two weeks ago.

Alternattiva Demokratika backed the calls for a boycott.

Carmel Cacopardo, deputy chairman, said that civil society should send a clear message that those who are prepared to finance such projects do not deserve the support of the Maltese population. 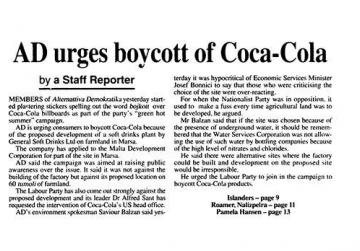 AD’s Coca-Cola boycott campaign in 1995, as reported by The Sunday Times of Malta.

The boycott tactic was used 21 years ago by Alternattiva Demokratika to try and stop a soft drinks manufacturer from building a new factory on arable land.

The Green party was opposed to the granting of a stretch of arable land in Marsa to General Soft Drinks for the construction of a new Coca-Cola bottling plant. In August of 1995, AD kicked off the ‘Green Hot Summer’ campaign, modelled on Coca-Cola’s own marketing campaign that summer called ‘Red Hot Summer’. The party urged people to boycott Coca-Cola products in a bid to put pressure on the company.

The Labour Party, then in Opposition, also came out against the development, with its leader, Alfred Sant, going so far as to write to Coca-Cola’s head office in the US.

The project was scrapped when Labour took office in 1996, and the factory was eventually built elsewhere.

The farmland at the edge of the Marsa industrial estate remains intact to this day.