Dismay at the demolition of a landmark Sliema house has been replaced by more outrage at the “atrocity” of the inclusion of its original niche into the new block of flats.

The incongruous addition from the iconic Id-Dar il-Ħadra (the Green House), as it was known to locals, in St Agatha Street, has added insult to injury and been described as an abomination.

“Even the saint it housed could not take it and has escaped,” one outraged resident said.

The original property, with its unmistakable and unusual green facade with niche and statue, had been recommended by the heritage authorities for protection due to its architectural value. 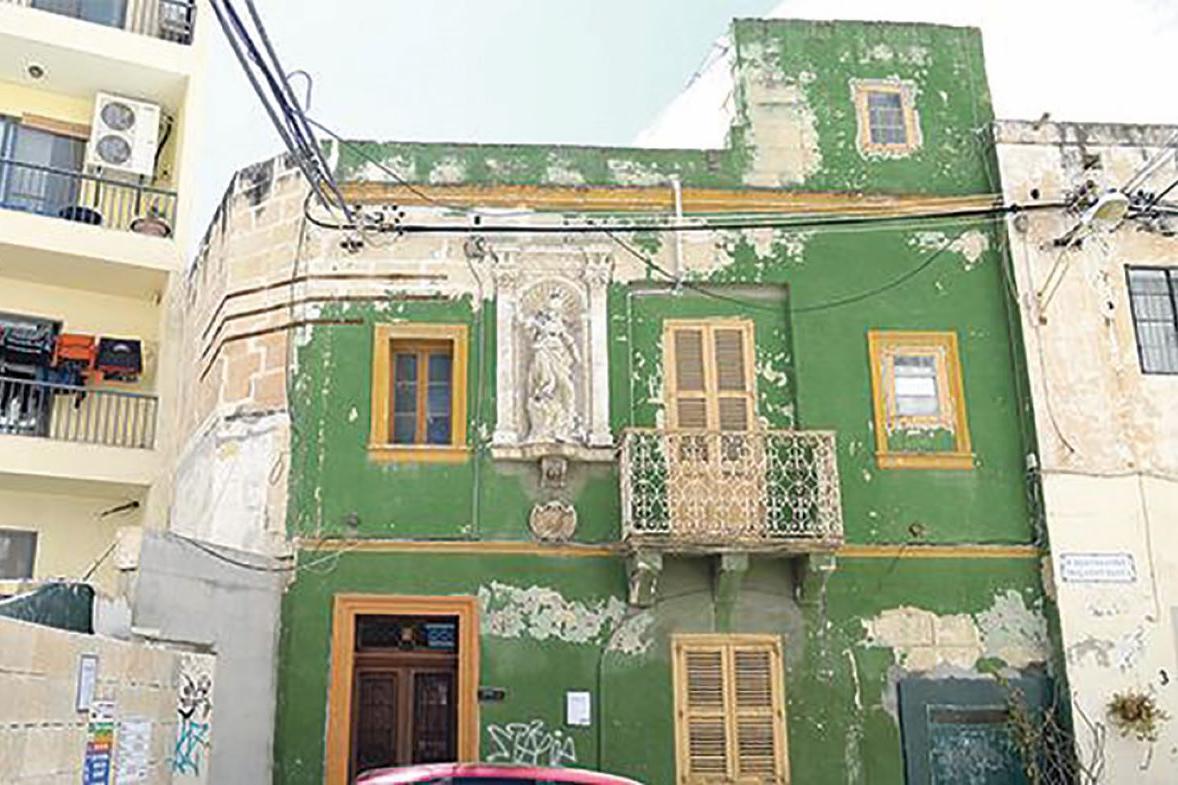 The original Green House with its niche and statue of the Virgin Mary.

But, in 2019, the Planning Authority approved PA 03062/17 to demolish the 19th-century building and make way for an eight-storey apartment block, with basement garages, a maisonette, 11 apartments and a penthouse, despite the objections of residents, heritage groups and the Sliema local council.

The plan, back then, was to retain the prominent niche, with its statue of the Virgin Mary, which gave its name to the adjacent St Mary Street.

The works have now been completed and the finishing touch is the original niche, recently retrofitted in between the balconies of the block – not even centred and done shoddily, according to the public – drawing in a barrage of disbelief and criticism.

The Sliema local council had lodged an appeal against the demolition decision, calling for the house façade to be protected in its entirety but it had been rejected.

Already before the niche was reinstated, the council had argued that the Planning Authority had ignored “the evident heritage value” of the house and allowed it to be replaced by “an incongruous and aesthetically questionable façade”.

Now, Sliema councillor Paul Radmilli believes the end result is a “hotchpotch of architectural features, where the historic niche jars with the style and colour scheme of the rest of the new façade”.

Moreover, he explained, when first constructed, the open balconies on the first floor did not allow enough width for the niche to be placed and had to be widened after the council pointed this out to the PA.

“We were concerned that the outer frame of the niche would not fit and we were right because parts of the balcony had to be broken off to accommodate it,” Radmilli said.

Images of the, as yet, empty niche, sandwiched between the balconies like an afterthought, provoked a spate of reactions, with the block considered “an insult to the local community, who used the property as a historic landmark”.

Sarcasm has abounded, too,

with comments on the “tasteful balconies, but pity about the jarring niche” and “respect” shown for the “effort to preserve” that the works have displayed.

Comments also aimed fire at the architects, wondering whether they have “completely lost it” and stating that “if this is not a joke, it is an unbelievable atrocity”.

One resident said she had overheard a conversation between the architect and the contractor deciding on whether to get rid of the niche as it seemed to be creating a problem and was getting in the way of the open balcony.

“Extreme worry” was also expressed about the “concoction”, fearing it would “set a trend wherein architects can persuade their clients, boards and the authorities that preserving and including certain details into a contemporary structure can satisfy the need to preserve our heritage…”

Environment NGO Flimkien Għal Ambjent Aħjar strongly condemned these “machinations” and asked where the PA Design Advisory Committee and the Superintendence of Cultural Heritage were in all this.

The condition that the niche had to be retained indicated to most that, at least, the façade would remain.

“Instead, a wily architect found a way to sidestep that condition, creating the obscenity that we see today, which was again approved by the PA,” FAA said.