The Life Med Green Roof project is now approaching the halfway point in its four-year lifespan. The project has progressed well and results to date are encouraging.

Feedback from the public has been positive. This means that the building industry is a step closer to creating more energy-efficient buildings and alleviating problems related to urban areas.

The project’s aim is to create a baseline study on the performance of green roofs in a semi-arid Mediterranean climate such as Malta’s and to encourage the adoption of green roof technology on the island.

Over the past two years, 15 species of native plants able to survive the harsh microclimate of a roof environment have been identified. Roofs tend to suffer from high solar radiation and are very exposed to winds. The use of native species is important as they are more adapted to surviving the local climate. 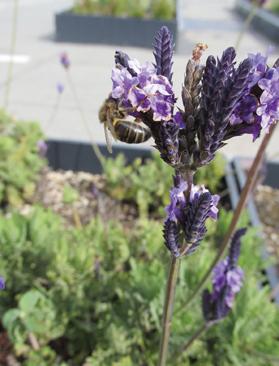 In addition, roof greening provides habitat for local wildlife and, to a certain extent, replaces the natural habitats lost to development.

Finally, native flora can be as aesthetically attractive as exotic plants. Exotic plants, however, do have a role to play in urban areas and can further prove beneficial and useful.

Italian partners Minoprio Analisi e Certificazioni and Fondazzjone Minoprio have conducted a series of studies on inorganic and organic materials to establish two growing media adapted to the Maltese climate. An investigation was carried out locally on possible waste material that could be used as part of the growing media. Unfortunately, none were suitable.

Meanwhile, on the roof of the University of Malta’s Faculty for the Built Environment, tests have been carried out to verify the performance of the two growing media and the plants selected. The plants grew well with very little maintenance.

Watering was carried out over the summer months but was stopped between October and April. During the course of the year, the progress of the plants was recorded through overhead photography.

Last October, a handful of endemic Maltese swallowtail butterfly caterpillars were observed feeding on one species of the test plants. One of these butterflies was observed on its maiden flight.

Roof greening is an important tool in combating urban-related problems. The successful development of this project would show that green roofs can be constructed using technology that has been tried and tested locally. Bene­fits from green roofs include the reduction in energy costs, mainly in terms of cooling and heating. They can also help in the reduction of flooding; acting as a sponge absorbing rain water.

Green roofs also create attractive spaces where people can socialise and relax; this increases the value of the property concerned. Green roofs can also provide habitats for beneficial wildlife.

All in all, green roofs have the potential of improving the quality of life of the urban dweller and rendering towns and cities more sustainable. The project is set to continue for the next two years.

The project is managed by the University and is part-financed by the EU through the Life+ programme. All data and deliverables will be made available to the public to encourage the dissemination of green roof technology.