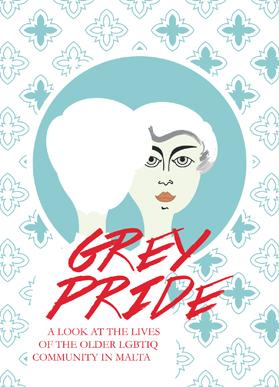 There is no doubt that Malta’s laws are finally catching up with the times we live in, particularly for members of the LGBTIQ (lesbian, gay, bisexual, transsexual, intersex, queer) community.

With the introduction of the Civil Unions Act and the GIGESC (Gender Identity, Gender Expression and Sexual Characteristics) Act – hailed as the best and most advanced piece of legislation of its kind anywhere in the world – Maltese millennials, who are also part of the LGBTIQ community, can not only feel free to be themselves, but some of their relationships and many struggles are now, finally, being acknowledged by the laws of the land.

But can you imagine what life was like for someone LGBTIQ 20, 30 or even 50 years ago? Back when being LGBTIQ was not only considered immoral, but illegal, too? It’s a scary concept for many people today, but it was a reality for many back then.

Grey Pride: A Look at the Lives of the Older LGBTIQ Community in Malta, the Malta Gay Rights Movement’s (MGRM) latest project, is a book that aims to inspire, educate and, more importantly, remember those who lived through those dark and turbulent years that are not just part of the LGBTIQ history, but part of our collective past.

“Grey Pride is a collation of experiences deriving from interviews held with older members of the LGBTIQ community,” says Gabi Calleja, MGRM’s coordinator. “We started working on this project around April of last year and we undertook it because we wanted to raise the visibility of this cohort within the LGBTIQ community and to build its understanding and capacity to address their needs and concerns.

“Recruiting participants who were willing to contribute their stories, even anonymously, and particularly females, proved more difficult than first envisaged,” she says. “All had come out to at least some people, although not necessarily at their place of work.

“For some, their LGBTIQ identities were a private matter and anyone asking questions about their sexual orientation and relationships would be perceived as invasive. This, however, in no way means that they were not comfortable with themselves and their gay or lesbian identities.

“The reality for today’s LGBTIQ youth, the social context we live in and the legal framework we now have, are completely different to that in which older people grew up in,” she says. “Documenting these stories is a way of recognising how far we have come.

“As MGRM, we strive to be inclusive to all members of the community and to ensure that our advocacy efforts and services respond to real situations and needs. This means continually striving to learn about the diversity within our own community – but this is only the beginning.

“The next phase is to disseminate the publication as widely as possible and to continue to raise the visibility with politicians, policymakers and service pro-viders. We will also look at cooperating with the Department for the Elderly so that they can receive training on LGBTIQ issues and, our Rainbow Support Service staff can, in turn, be trained on services available to the elderly. We also hope to set up a social network where older members of the LGBTIQ community can find friendship and support should they need it,” she says.

The book is made up six real-life stories of eight, older members of the LGBTIQ community, whose age ranges from 53 to 73. The stories are personal accounts that tell these people’s experiences of war, growing up, losing a lover to AIDS and even of undying love. They are real stories, often sad, sometimes heartwarming and they were put together by Rachel Agius.

“It’s an uncomfortable and inescapable fact that we all grow old, but we don’t often dwell on it because ageing remains something of a taboo; something that unsettles and concerns,” says Rachel, who was tasked with transforming notes from the interviews with elder members of the LGBTIQ community into narrative form.

“Working on the stories of older members of the LGBTIQ community was both insightful and comforting,” she says.

The book is also strikingly illustrated with religious and Maltese iconography sitting side-by-side these stories. Pictures were created by artist and illustrator, Nadine Noko, who also designed the front and back covers for the book.

“I also chose to use the mirror,” she says, “because the people featured in the stories kind of review their life and tell us how they related to their sexuality thirty years ago and the way they look at their relationships and sexuality now that there have been so many social changes.

“In the end, I chose two covers for the front and back, inverted, because, although society, in general, lumps the LGBTIQ community into one homogenous mass, there is diversity between and within the lives of lesbian, gay, bis, trans and queer people,” she concludes.

This book, with its gorgeous illustrations and recollections of a time that has gone by, shows the struggles the LGBTIQ community went through – and still goes through – and creates a platform for these things to be discussed. And whether you are part of the LGBTIQ or not, you should definitely give it a go.

Grey Pride: A Look at the Lives of the Older LGBTIQ Community in Malta can be accessed for free on Issuu (by Googling ‘Grey Pride + MGRM’). Physical copies are available from MGRM on 2143 0009.