Exploitation has always been the name of the game since the dawn of early civilisation. Human beings have sourced all that nature offers them, at first through a balance that owed much to their basic instinct honed by millions of years of evolution from micro-organisms to enterprising bipedal animals and then through their capacity as sentient creatures that could rationalise, dream, calculate and eventually abuse of what they erroneously thought was intrinsically theirs.

Planet Earth has supported a number of biomes, each containing balanced ecosystems that persisted through millennia. Human activity through wars, deforestation and general abuse of natural resources, depleted and annihilated whole regions of the planet just to satisfy megalomania and human greed. 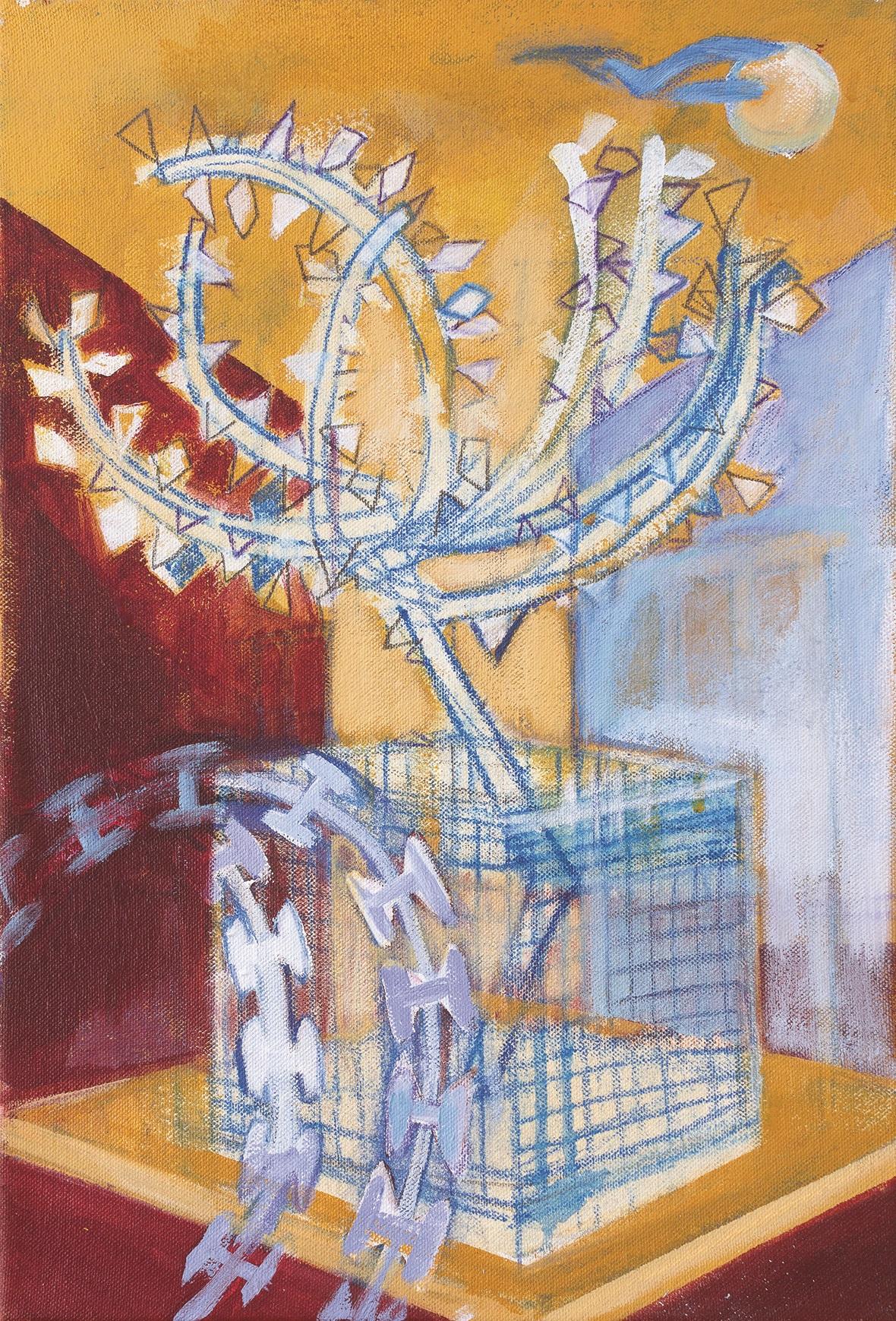 “We’re cashing in a billion years of planetary savings bonds and blowing it on assorted bling,” claims novelist Richard Powers in his seminal novel The Overstory. This eloquently describes the stupid shortsighted behaviour of post-industrial and contemporary society.

Ġulja Holland’s third solo exhibition, her first one in Malta since her move to London in 2019, carries forward the investigation that she embarked upon in her previous solo where she had similarly investigated man’s impact on the natural environment. When Your Voice Shakes follows after her move to London in 2019 to continue her post-graduate studies in art. Now she is focusing on the Maltese microcosmic reality amid the global environmental crisis.

The title of the exhibition refers to a quote by American activist Maggie Khun, founder of the Gray Panthers: “Stand before the people you fear and speak your mind – even if your voice shakes.” This same phrase was spray-painted in 2019 on a wall in Msida, above the date of October 16, 2017, the day when investigative journalist Daphne Caruana Galizia was brutally assassinated. 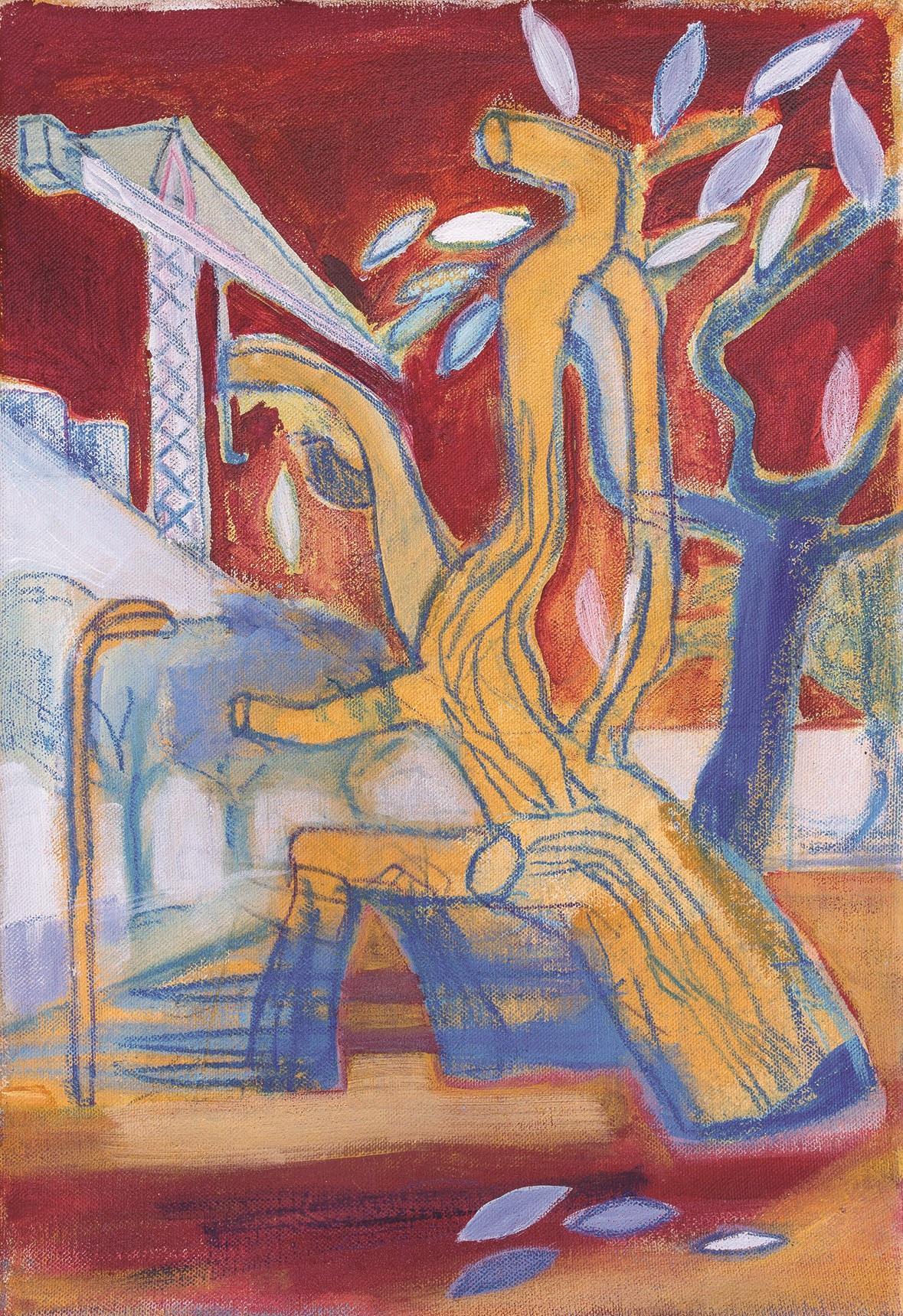 “The phrase is particularly timely in the face of a worsening climate crisis. Facing the precipice of our existence, we are finally forced to contend with the true cost of what we have called progress,” Holland remarks. “The political undertone of these paintings is suggested in my choice of symbols and colour palette.”

Holland’s visit to a 2019 exhibition of William Blake’s works at the Tate Britain was inspirational. London was the birthplace of the visionary painter, printmaker and poet and he lived there for most of his life. The burgeoning capital city of 200 years ago, amid the harsh realities encountered by those who had made London their home, provided Blake with constant inspiration. He stitched together this brashness as narratives, mellowed via his signature flights of fancy into pure imagination.

While at the exhibition, the Maltese artist came across a quote of his, kindling the first embers of a concept for this exhibition: “The tree which moves some to tears of joy is in the eyes of others only a green thing which stands in the way… As a man is, so he sees.”

The focus on relative microcosms, London in Blake’s case and Malta in Holland’s case, can be deciphered as a comparative parallel. Poetically and quite ironically, COVID-19 exiled Holland to Blake’s London.

News of the various road-widening projects, among which that of the controversial Central Link, reached her and this provoked a helpless anger which she translated into paintings with a limited palette of varying shades of the primary colours, as representative of the colours of Malta.

The tree as a motif was one of the main characteristics of the art of Italian artist Carlo Mattioli.

Generally, for him, the tree is the only figurative element amid an abstract backdrop. These trees attain relief-like relevance in a composition that intimately fuses material and colour, as well as the abstract and the representational.

Using the motif of trees to represent Malta’s natural heritage, Holland sought to create a body of work which challenges our country’s collective understanding of progress

Maltese trees, instead of being cherished for their contribution to our well-being, are being callously felled or considered as nuisances to be eliminated to make way for more roads, more buildings and more cranes, in a country that has lost all sense of priorities and conscience. 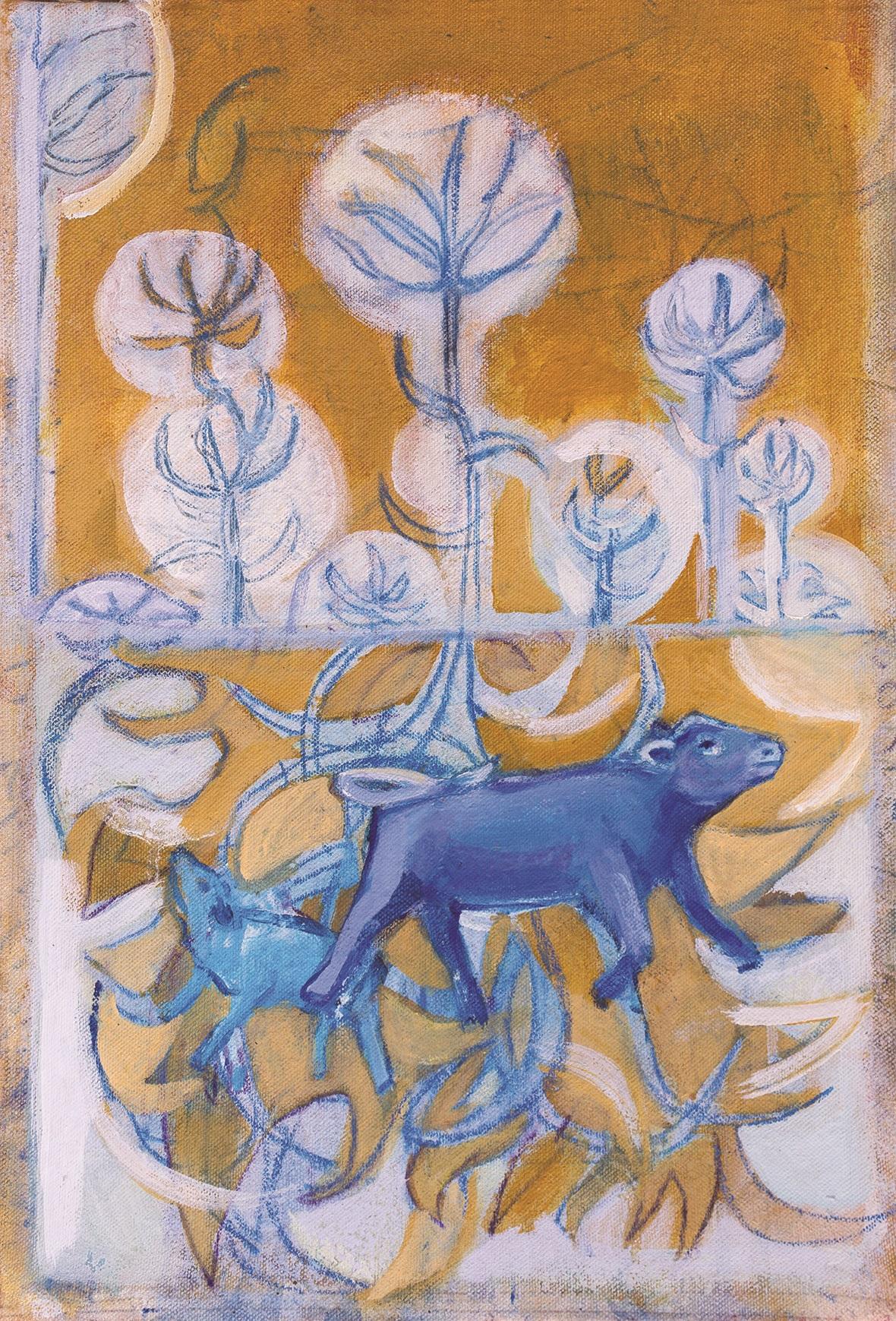 Holland elaborates: “Of course, the deforestation crisis in Malta is an environmental crisis. But at its root, it is a political one.”

The Pruning, the title of one of the paintings in this exhibition, is in itself an intended misnomer. It sarcastically comments on the savage butchering of branches through a perverse exercise, euphemistically and patronisingly described by the authorities in question as being done for the benefit of the tree itself. The cranes, together with their offspring of hideous high-rises, replace the stunted trees in an apocalyptic hellish race towards the heavens.

Holland regards German artist Anselm Kiefer and Canadian artist Philip Guston as artistic soulmates as they both investigate the fine line between private conscience and public responsibility. Guston renounc­ed his fame as a foremost Abstract Expressionist in 1967 by embarking on a ‘reactionary’ return to representation.

His style changed, embracing the figurative through a cartoon-style that reduced the palette to mostly black and white, greys, blues and reds, comparable to Holland’s own similar reduction of colour palette. He engaged with social issues that mattered to him, such as the Vietnam War, while integrating the narratives from magazines and the excesses of raging racism, represented by his Ku Klux Klan imagery, one of his thematic staples during those years.

Anselm Kiefer’s sprawling canvases evoke both natural beauty, through floral representations, as well as evil as an eddy of German national memory, through his all-encompassing blitzed and scarred landscapes, an admission of guilt and responsibility for a warmongering 20th century history that destroyed land and soul. 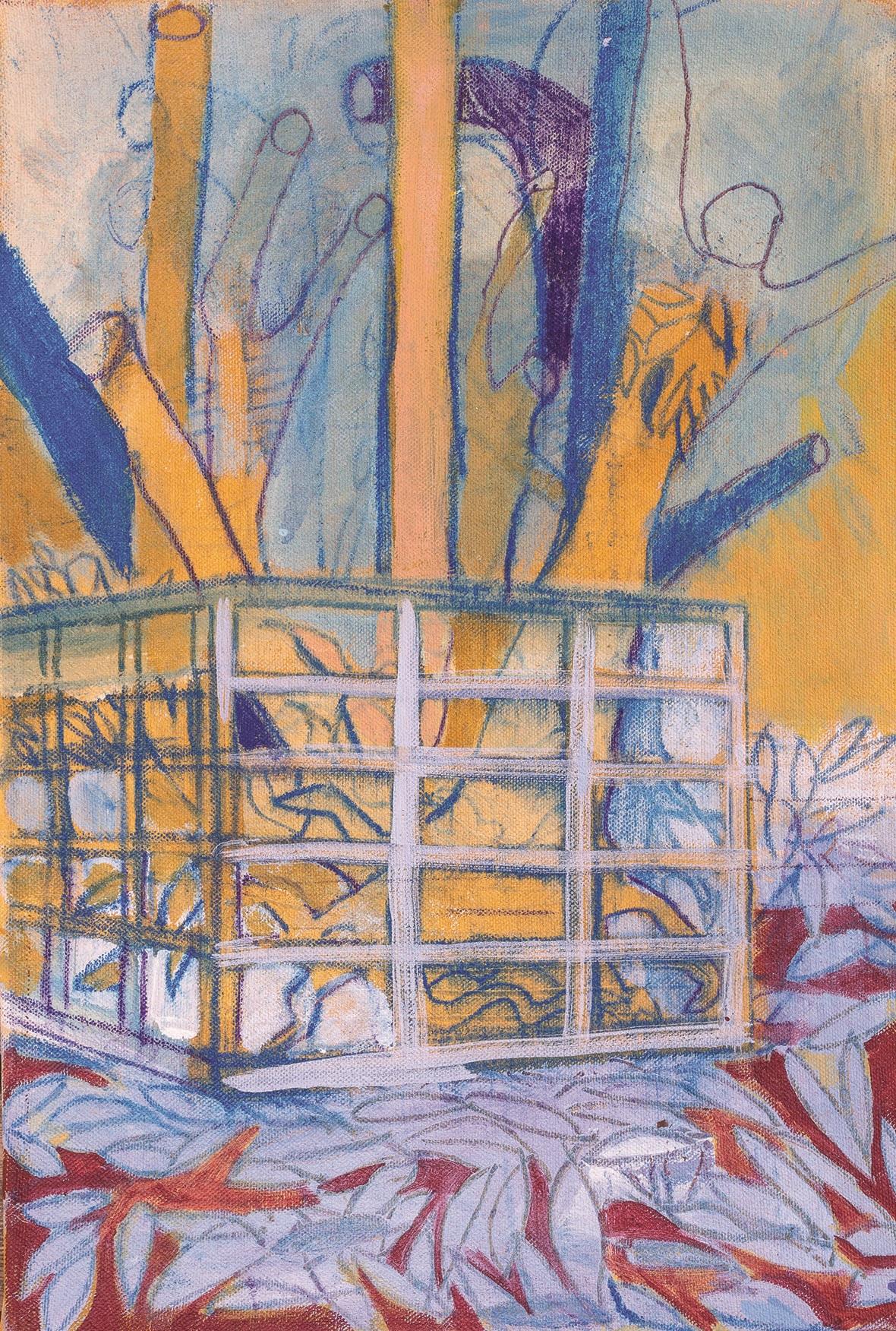 Most of Kiefer’s oeuvre concerns the German cultural trauma endured by whole genera­tions and the irrevocable tear in the fabric of German collective memory. So, one can find a common thread between the output of these three artists, a getting to grips with national situations that are beyond our control, in the realm of howling political shortcomings and incompetence. In Holland’s words: “I have moved away from literal depictions towards metaphorical interpretation.”

The truth in the collages

Recently, Holland has experimented with large-format paintings where she used social media images documenting old trees and farmland in Malta that were summarily decreed to be sacrificed on the altar of greed. She integrated these images into collages, into ‘vanitas’, evoking American artist Robert Rauschenberg in his transfer of readily-‘found’ American and non-American iconic images from popular culture, that were combined into paintings. This endows the works of both the American and the Maltese artist with an augmented narrative power and a startling immediacy.

Social media, through continuous repetition, has subliminally transposed dreary images of our island’s present ecological degradation into our collective unconscious, thereby seep­ing them into the realm of local popular culture. The process starts with digital collage which Holland then renders in pencil or charcoal on raw canvas, while she gradually builds up layers of acrylic paint: this also elicits Rauschenberg’s and David Salle’s idiosyncratic approaches to juxtaposition of diverse images. She intervenes by drawing on the collage, following her London tutors’ instruction to develop her paintings as if they were large-scale drawings.

Holland remarks about her enthusiasm to this approach: “I have always been drawn to the aesthetic of pentimenti and therefore it seems natural that my drawing has evolved into an element that is deliberately left in a finished work. I feel it adds visual interest and lends a sense of urgency to my paintings.”

Despite the present Maltese scenario and the particular symbolism that pervades her paintings, the Maltese artist defines herself as realistically optimistic. “However, my practice lends me a safe space to explore the darker aspects of the human condition, on a personal scale as well as on a global scale,” she concludes.

When Your Voice Shakes, curated by Justine Balzan Demajo, is hosted by Studio 87, Liesse Hill, Valletta, until October 6. This summer, Holland graduated from the Royal College of Art with a Masters in painting which was financed/ supported by Tertiary Education Scholarship Scheme award. Opening hours are Monday to Friday from 3pm to 7pm and Saturdays from 10am to 1pm.