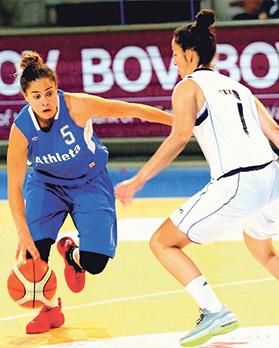 Luxol were in front virtually throughout the whole game and looked set to take a two-game lead when they held a 45-37 advantage with only four minutes left.

But Gżira refused to throw in the towel and produced a match-winning 11-0 run that stunned Santino Coppa’s team.

Luxol had started brightly, a Paula Ellul trey set them to a positive early stretch and subsequent hoops from Stephanie Demartino handed them a 17-6 lead after just eight minutes, forcing Athleta to an early time-out.

Luxol’s extended their lead to a game maximum 24-9 midway through the second quarter.

The American incidentally only potted from the charity line in this game although she was instrumental in winning the offensive rebound game for her team as Athleta outnumbered their rivals 19-8.

The third quarter was a balanced affair with Athleta momentarily coming just a basket behind, 30-32. But Luxol, who again had to do without their import player Attirah Munir, closed the quarter again on a high note with a 9-4 run for a 41-34 scoreline.

Points were scarce in the first part of the last quarter until an Ina Baena Medina hoop followed by an Ellul transition basket put Coppa’s girls 45-37 in front but these resulted to be Luxol’s only points in this last quarter.

A Grima trey followed by a one-on-one play by the same player threw the game wide open.

With Luxol failing to score, Athleta managed to jump into the lead with a Grima close-range hoop in the last minute.

Luxol then lost possession and Grima sealed her team’s series equalising win with the game’s final points from the free throw line.

Luxol and Gżira Athleta will meet in Game Three tomorrow, at 7.30pm.