Residents of the Ħal Far open centre will be receiving items like soap and floor cleaner soon, after donors collected €2,500 to buy them the essential items.

British expat Frank Tropman said that through his colleagues, generous donors and contacts in the retail industry, he is close to amassing enough sanitary and cleaning materials to help the 1,200 residents at the centre from as soon as next Monday.

Each of the 150 eight-person units at the open centre will receive a mix of items including a five-litre jerrycan of industrial strength floor and surface cleaner and an individual bar of soap for each resident. 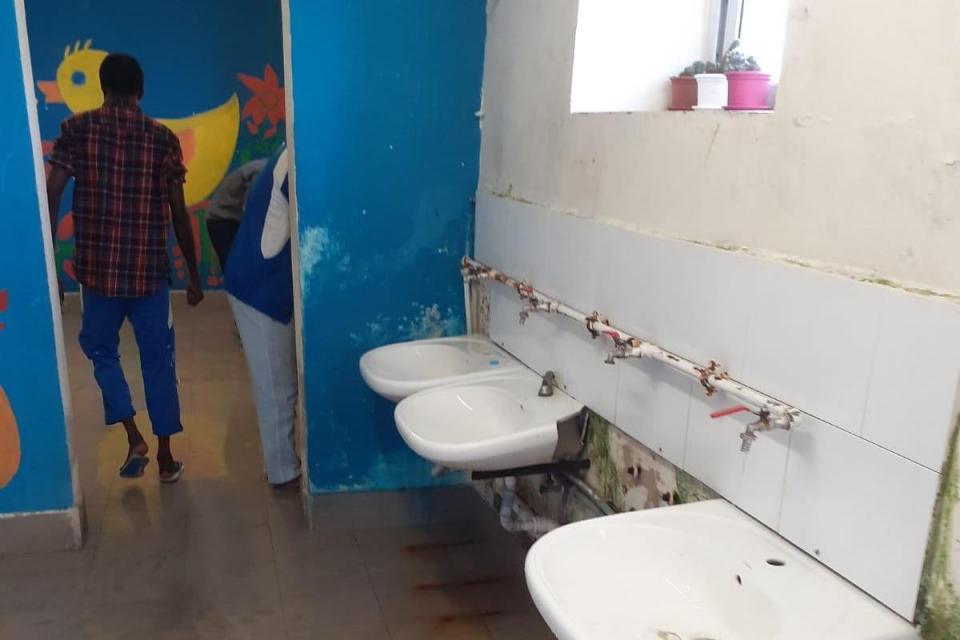 Migrants at Ħal Far are queuing to use bathrooms and are worried about lack of sanitation.

The effort was spurred on by Times of Malta news reports that the Agency for the Welfare of Asylum Seekers (AWAS), was slow in adding sanitary facilities and that key cleaning products were running out.

Worried residents also said that the authorities had fallen short of providing and replacing key hygiene and cleaning products like hand soap and floor cleaners. Some eight-person units were also resorting to sharing items.

The centre has been under lockdown since Sunday last week, after eight residents tested positive for the COVID-19 coronavirus.

Tropman said that he had reached out to AWAS to know what they needed.

The initiative has received the help of Tropman’s colleagues at the English Language Academy in Gżira and an outpouring of support from donors on social media.

Within 24 hours of posting the appeal on the Expats Malta and Up In Arms Advisory Facebook groups, he had managed to raise over €2,500 from 137 donors. 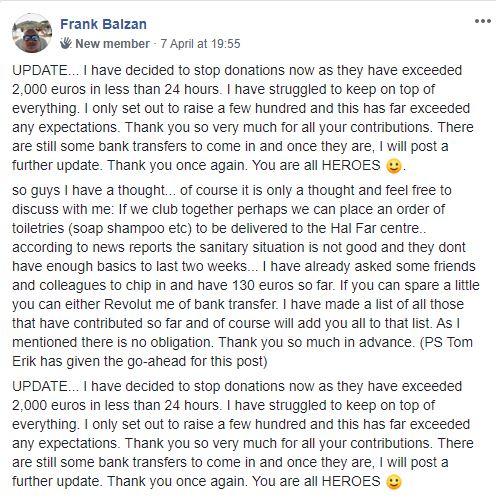 Frank Tropman, who goes by Frank Balzan on Facebook, was overwhelmed by the response to his fundraising appeal.

“I have been overwhelmed and quite emotional at the amount of support that has been given. It is a very difficult time and everyone suffering. People worried about making their money last. Some have contributed €3 and others up to €200.

“This was way above what I was expecting. I thought we would only raise a couple of hundred euros.”

While fundraising proved to be easier than expected, the organiser said he did encounter problems with buying the items from wholesalers and supermarkets.

Tropman said he was contending with limited stocks on the island and from wholesalers who either prioritised supermarkets and retailers or who outright refused to deliver to the centre.

The teacher finally reached out to his friend Paul Borda, who is part of the family-run Gala group and its supermarkets.

“Paul’s team have spent hours tracking down suppliers and have been getting the products together. They are giving us a substantial discount, will add to the stock and carry out the delivery.

“This has been a community effort. We are hopeful that we’ll have everything ready by Monday and we can make an appointment with AWAS to deliver the items," he said.