Almost 60% of young people in Malta would rather live in another European country, according to a survey released on Thursday.

The authors of the EY Generate Youth Survey said the finding was a "cause for concern".

When asked which part of the world they would like to live and work in, 60% of Gen-Z and 59% of millennials stated another European country.

There was a 12% increase on last year's results in millennials who dream of moving abroad.

Only 28% of Gen-Z and 27% of millenials said Malta, down a few percentage points on last year. 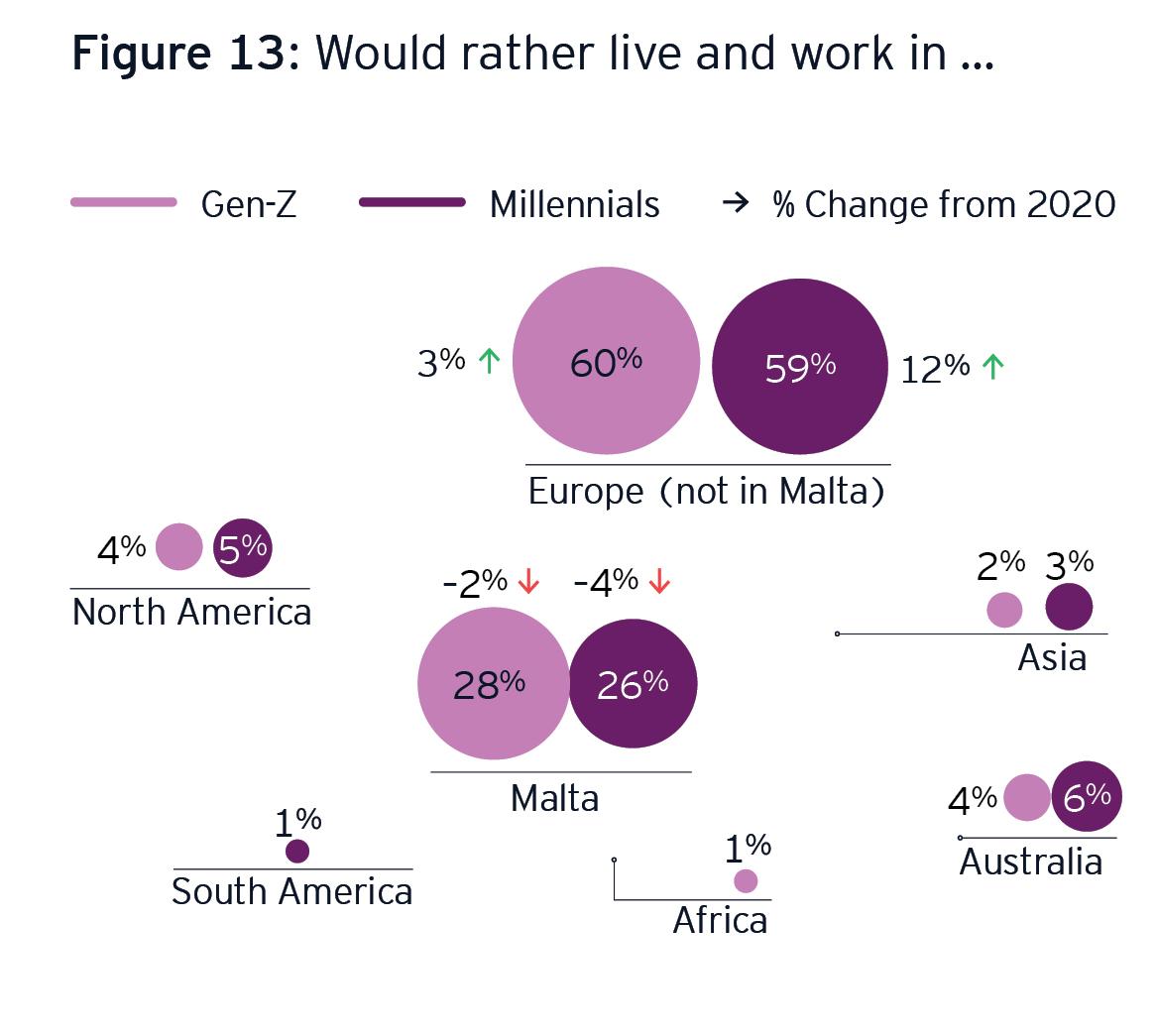 “While spending some time away from our shores is certainly beneficial as it opens young people up to different cultures, experiences, and ways of living, it should be noted as a cause for concern,” the survey's authors said.

It also showed that 9 out of 10 young people believe Malta’s environment is getting worse with the majority blaming overdevelopment. The results paint a picture of a young entrepreneurial generation with a strong environmental conscience that is concerned about the country’s international image and economy and uncertain about their future. 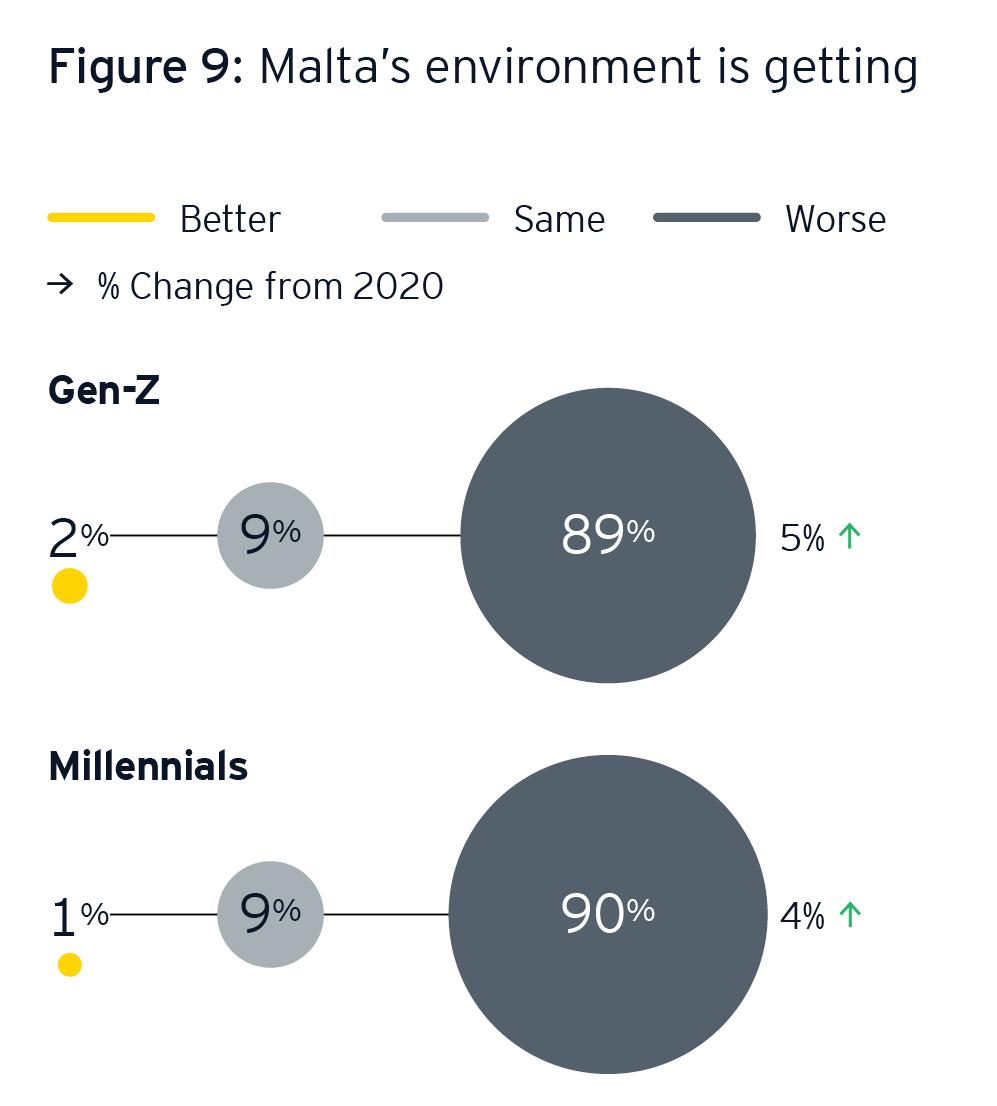 Worried about the environment

Asked about the environment, 89% of Gen-Z and 90% of millennials believe it is getting worse - an increase of around 5% compared to last year.

Overdevelopment once again placed first in the list of Malta’s biggest challenges (68%), followed by the environment (55%), traffic (26%), the country’s international image (24%) and the economy (21%). COVID-19, which was in third place last year, slid to sixth place with 20%. 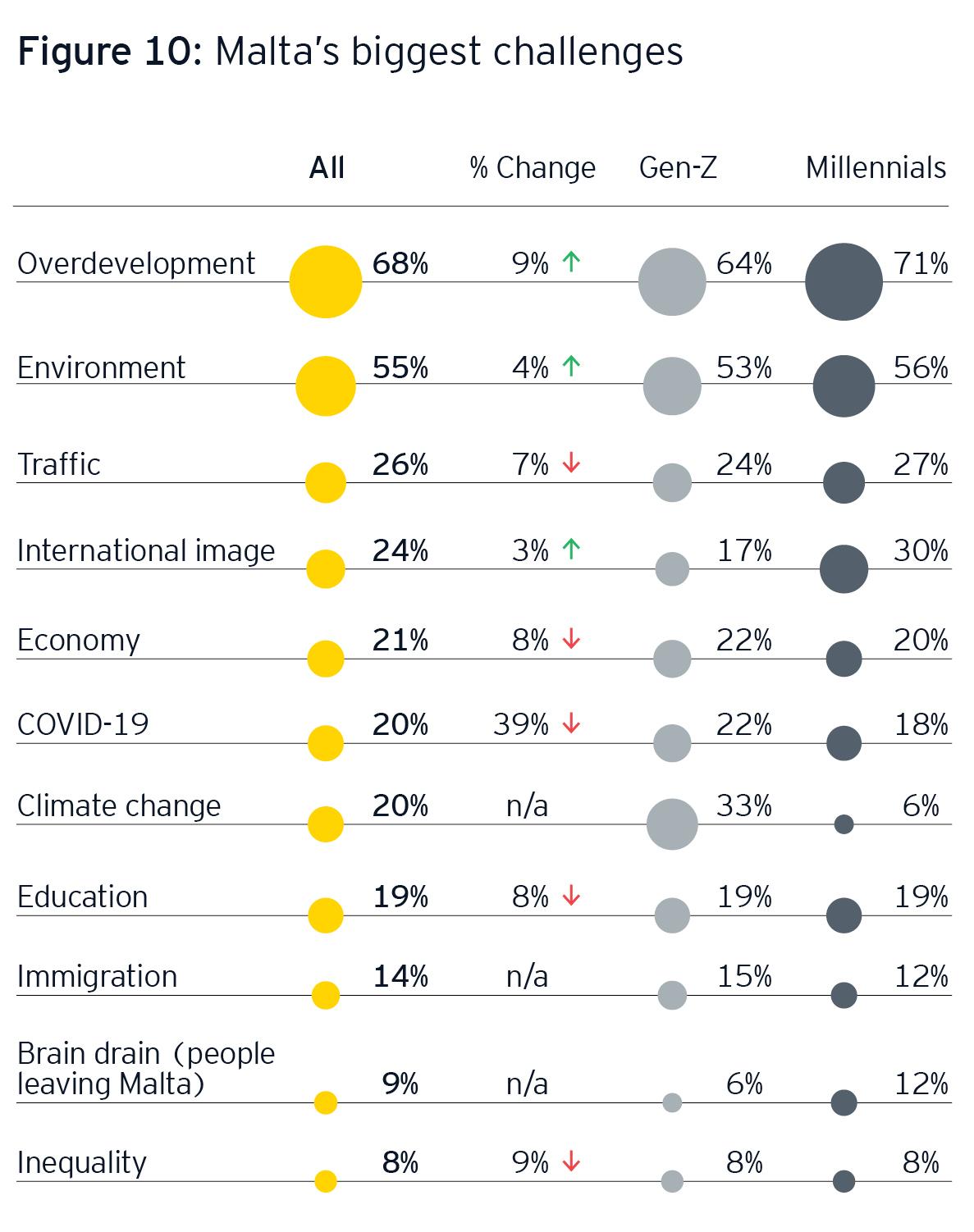 The survey showed that Malta’s youth believe government should prioritise investing in pollution reduction and waste management, followed by governance and public education.

Among recommendations for the future they prioritised large afforestation plans taking prominence over development which removes trees. They called for protecting ODZ areas and natural sites, expanding woodland where possible and greenifying urban areas and creating more green lungs in busy town centres.

While around one-third are hopeful they will be living better than today, within five years time, those that believe they will not be living better increased by 8% (Gen- Z) and 10% (millennials) reaching 29% and 31%, respectively. Responses indicate uncertainty as close to 40% stated they do not know if life is likely to be better in the future. 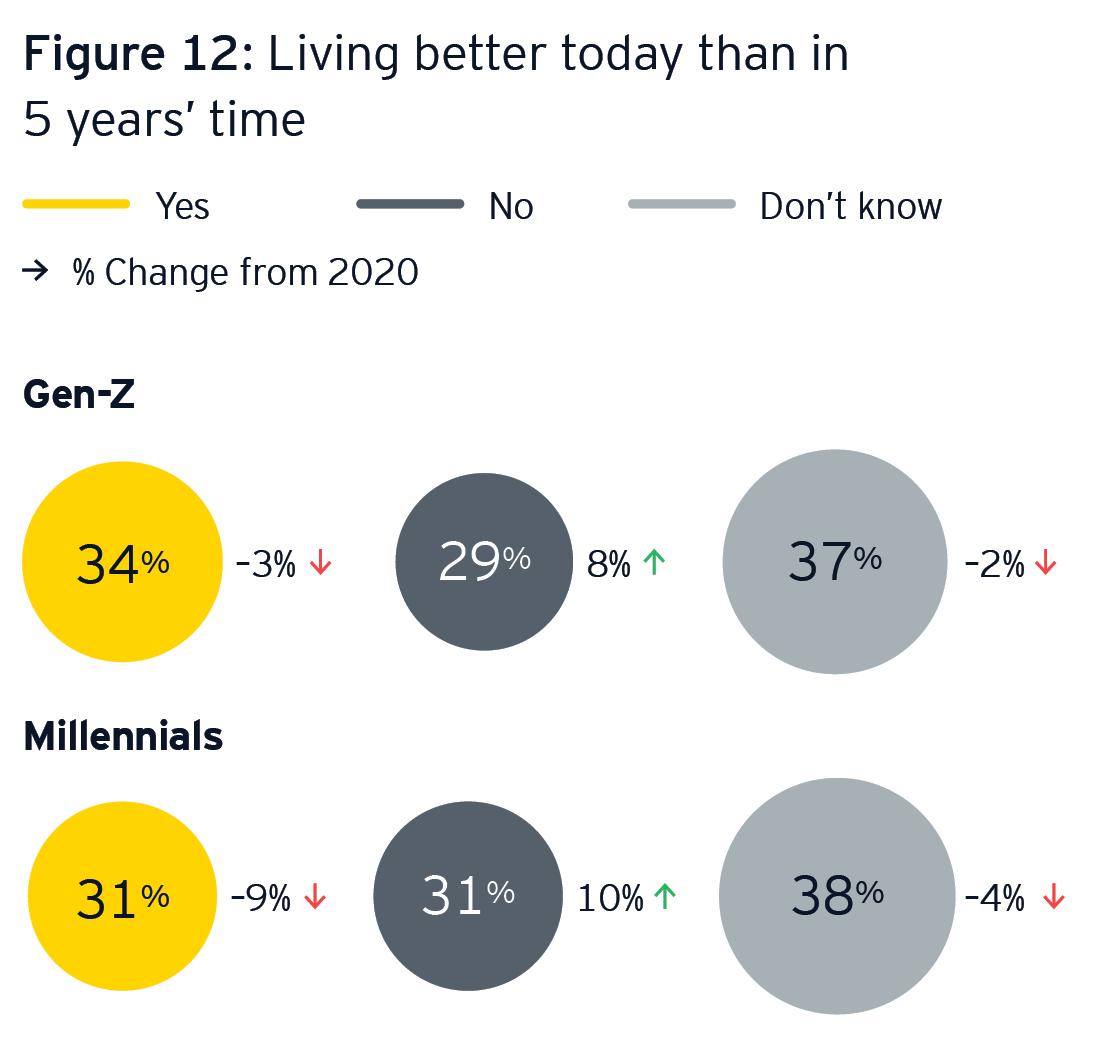 Their thoughts for a better future in Malta included promoting a healthy lifestyle and health and safety, raising living standards and controlling the rising cost of living and property prices.

Work and the economy

The survey showed that around 60% would like to become entrepreneurs. Compared to just a year ago both Gen-Z and millennials’ financial situation improved. For Gen-Z, those doing better increased by 12%, with 42% now stating they are in a better financial situation. Millennials report a 15% increase to 46%. 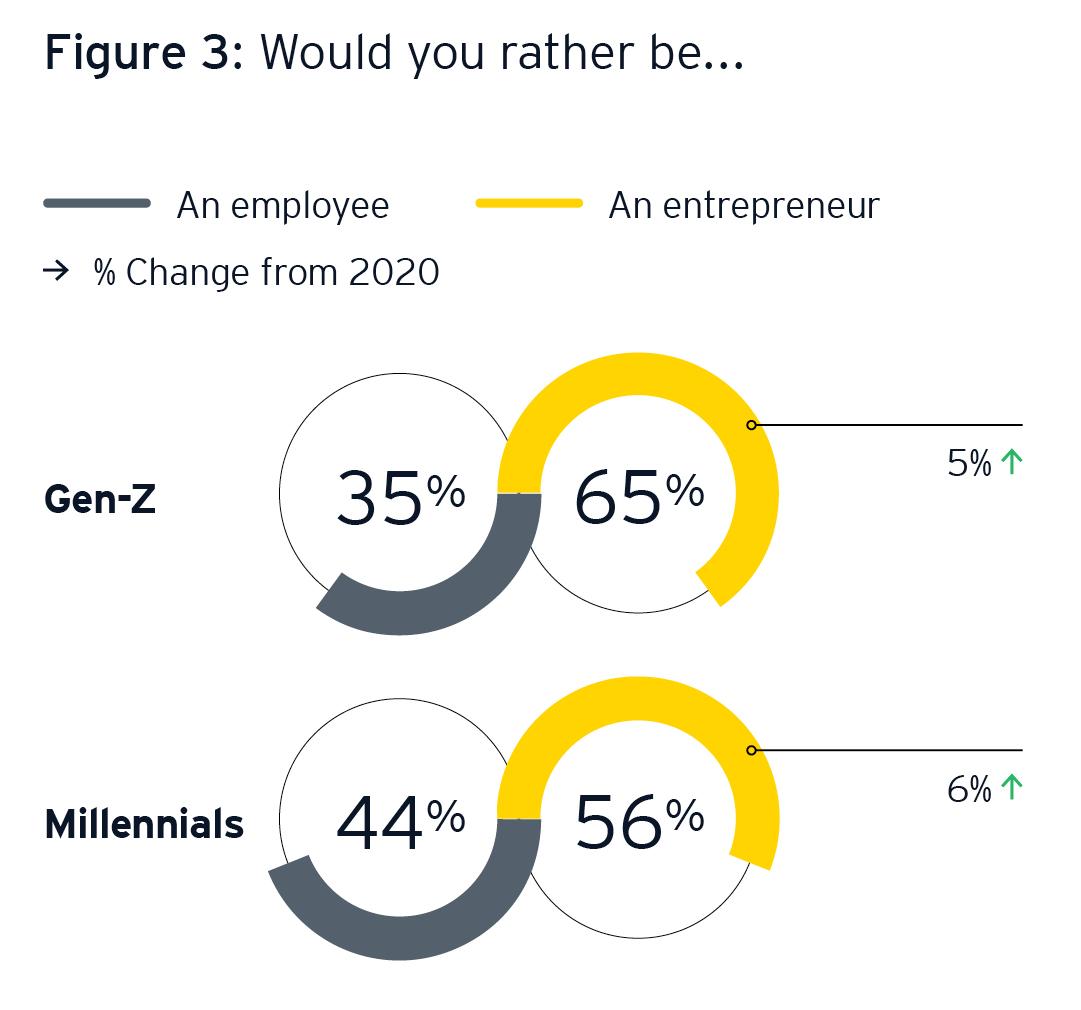 As for their views about the country’s economy, almost half think it is “fair” but there was an increase in those thinking it was “poor”. Very few respondents from both generations believe the economy is “excellent”. 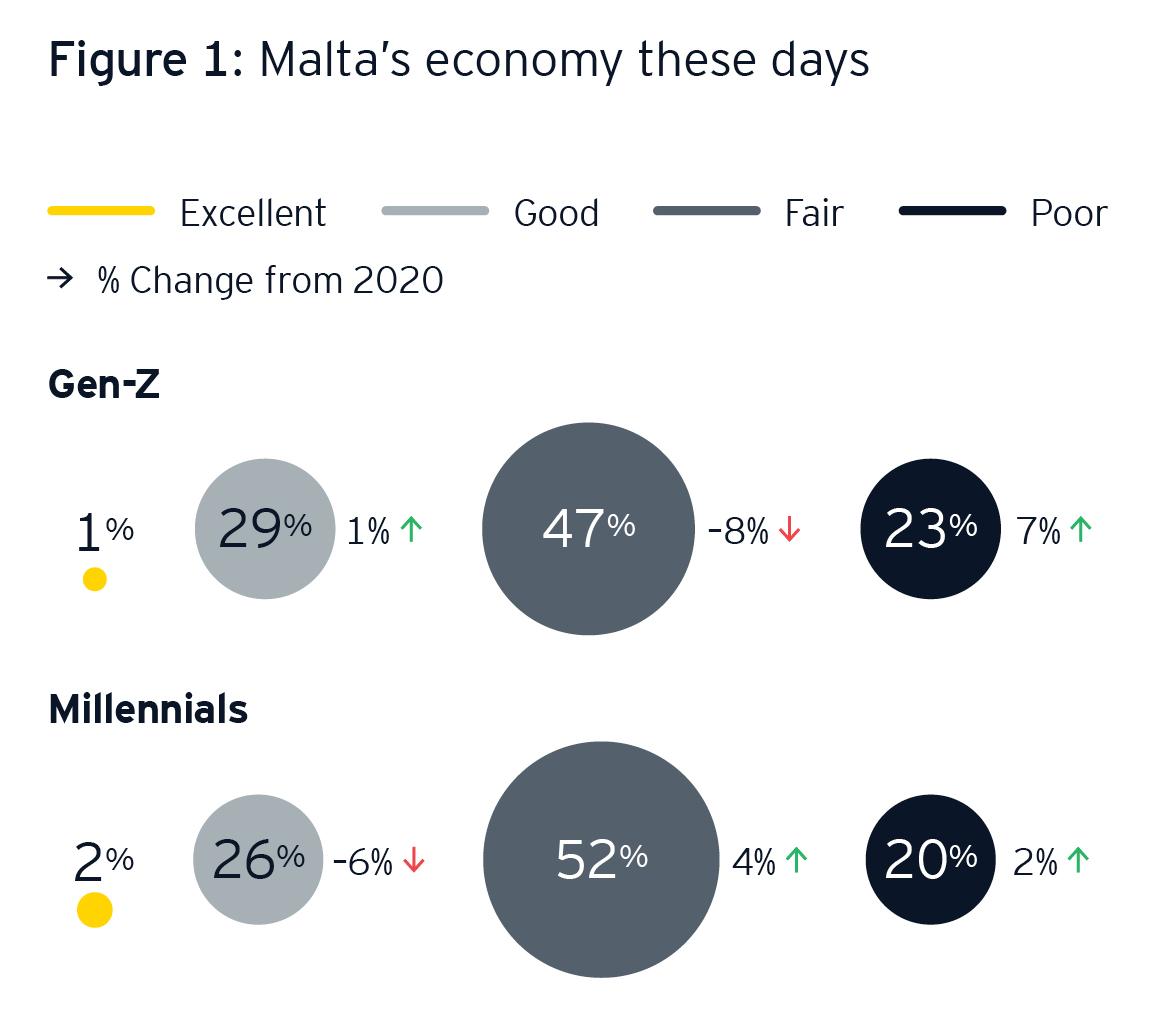 Both generations are more concerned by the pandemic's impact on the economy over their own health. Gen-Z gave their own health a concern rating of 2.7 out of 5 this year, compared to 3.3 in 2020. 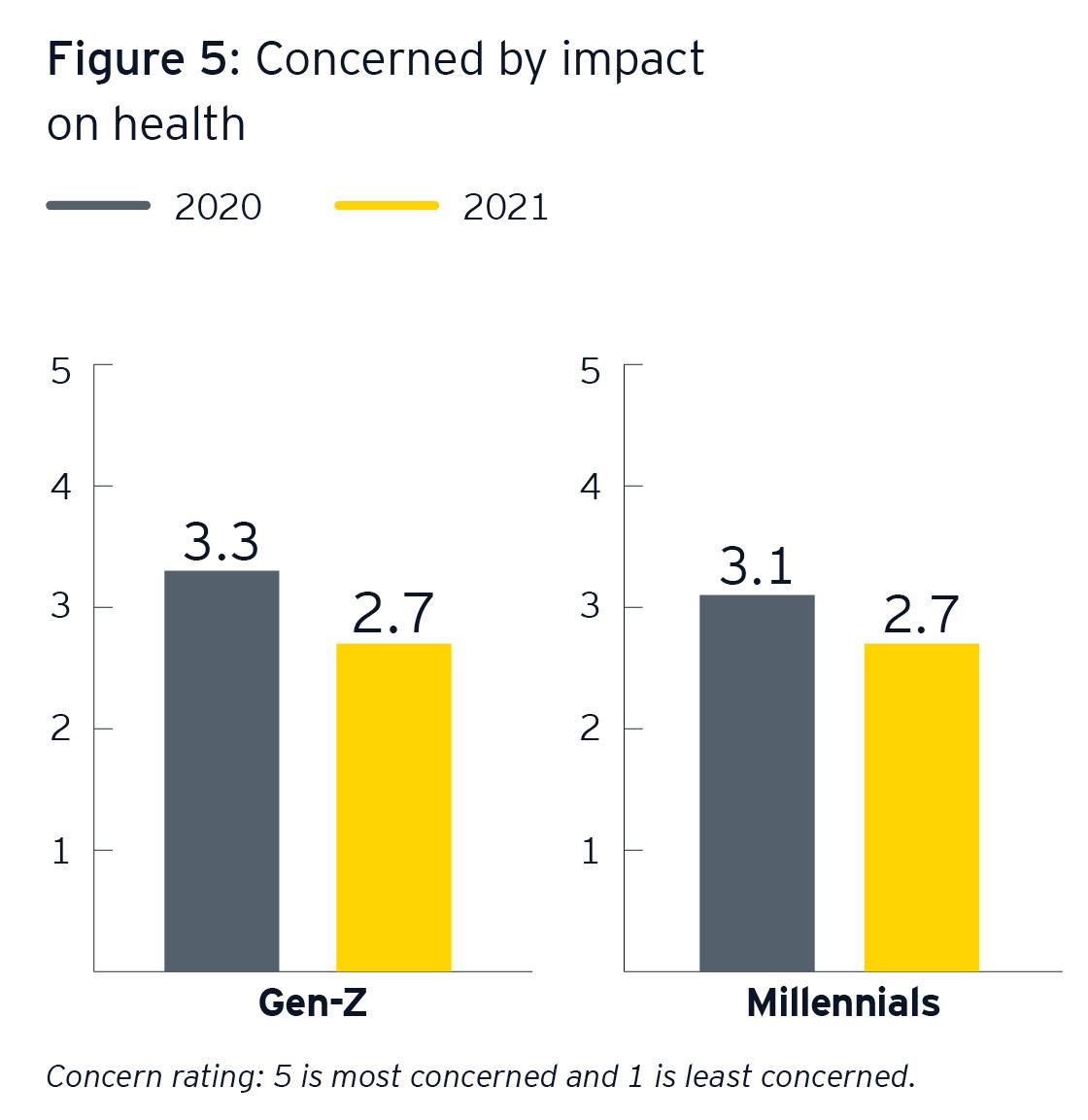 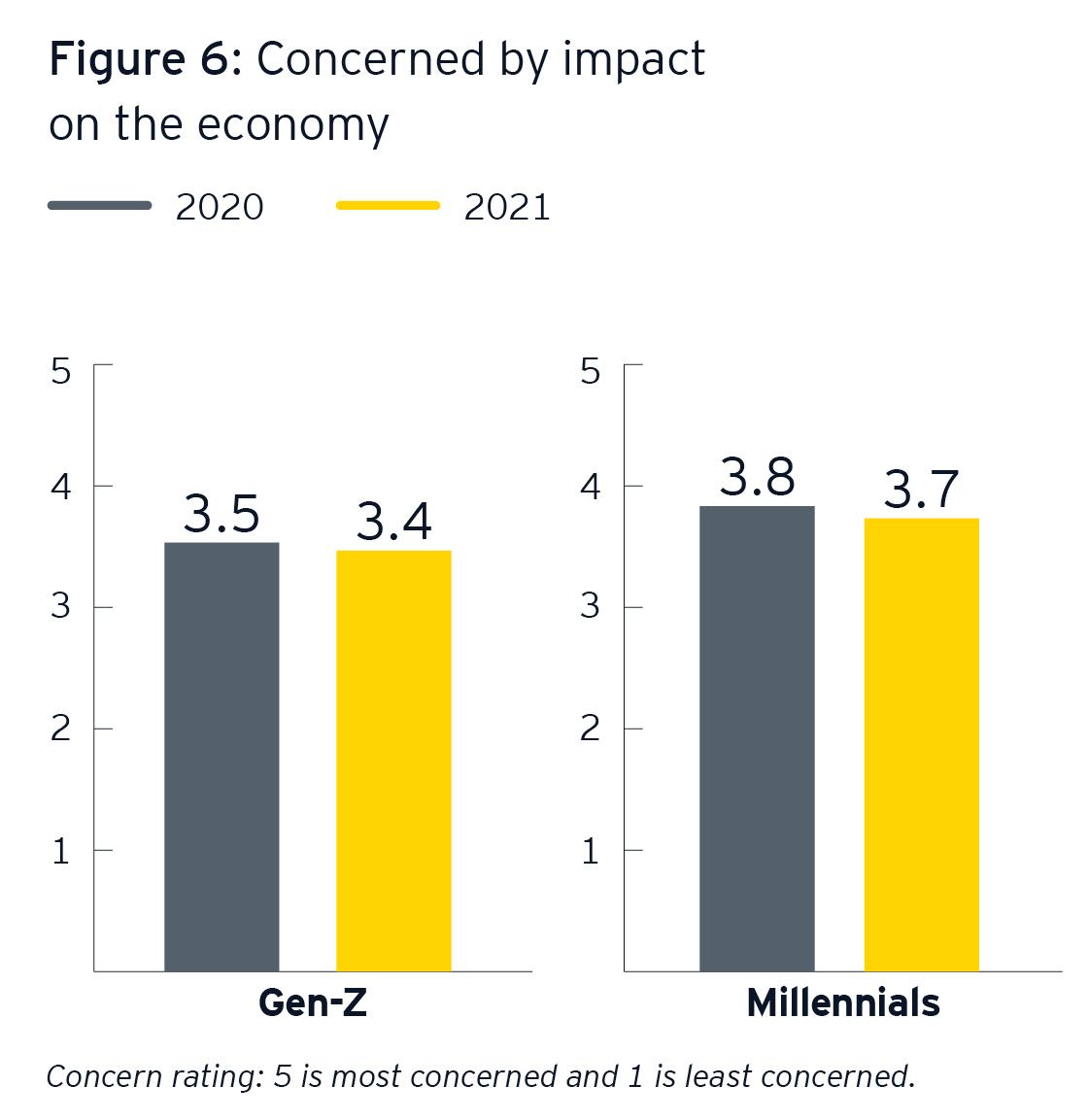