Prime Minister Joseph Muscat on Friday said he was disappointed by police’s “heavy-handedness” during a protest at the planning authority.

The police dragged protesters out of the Planning Authority premises on Thursday.

The protestors attended a board meeting in protest over controversial plans for another new fuel station outside development zone.

Two of the activists were bleeding as they were forcibly removed from the building by Rapid Intervention Unit officers.

Dr Muscat told the Times of Malta he was taken aback by the way the police had managed the situation, adding that a similar prior protest had not resulted in any such incidents.

TIMES TALK: In May, activists said 'we'll stop other PA meetings if we have to'

“I have made it clear that I do not want to see similar mishandling and heavy handedness from police,” he said, adding that he defended civilians’ right to speak up. 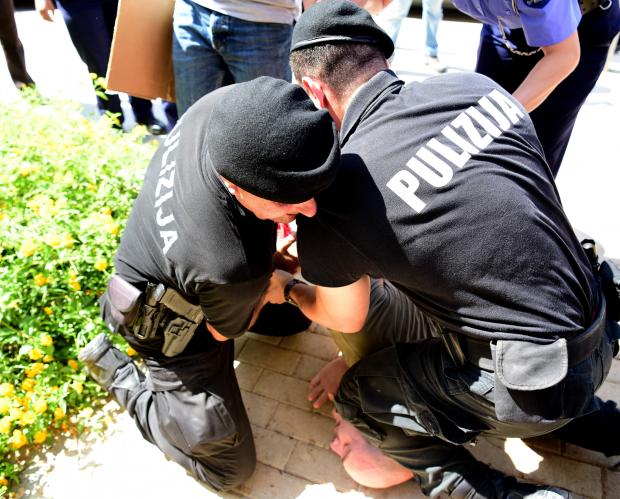 Footage of the incident shows the protestors being manhandled, sparking anger among the protesters who insisted they were doing nothing illegal.

Dr Muscat pointed out that the decision at the sitting appeared to have gone the protestors’ way as the permit for the contentious petrol station had not been approved.

The activists however say they are protesting that a full nine months after the authorities’ promise to review an "obscene" fuel service station policy, no changes had been made so far.

Police and RIU officers turned up at the premises shortly after eNGOs Moviment Graffitti and Kamp Emerġenza Ambjent activists turned up in protest during a PA board meeting discussing the fuel station planned outside of development zone.