Charles A, Gauci, Chief Herald of Arms of Malta, has granted heraldic arms to Ta’ Pinu basilica. Recently, he presented the letters patent to Fr Gerard Buhagiar, the basilica’s rector. The arms were designed by Fr Roberto Gauci under the guidance of Dr Gauci. 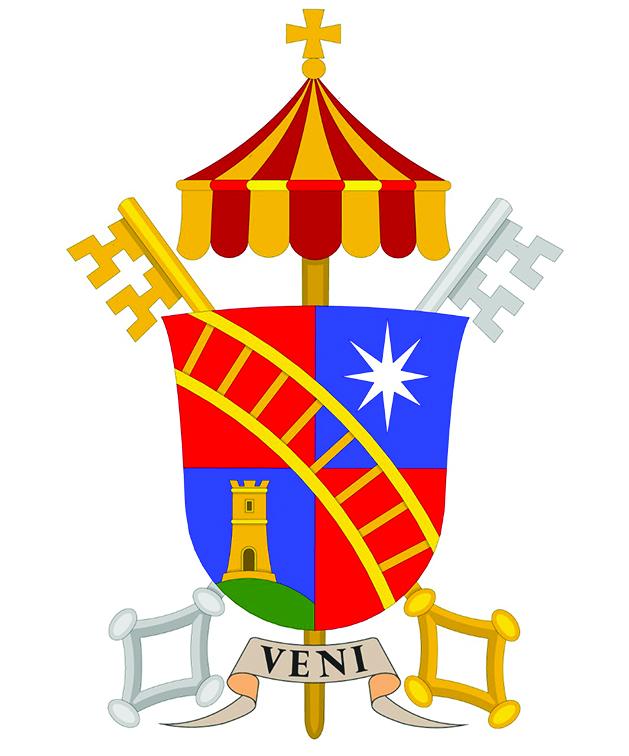 The first and fourth quarters are red, the colour of blood, thus representing divine life in iconography. The second and third quarters are blue, associated with human nature, because the vocation of man is to become a citizen of heaven.

The second quarter bears a silver eight-pointed star, a symbol of the Virgin Mary, who by being ascended into heaven, becomes an anticipation of the redeemed mankind participating in the glory of Christ.

The third quarter bears a golden tower. This element is taken from the traditional arms of the Gauci family and is included to remember Pinu (Filippo) Gauci, the founder of the first chapel, and for whom the sanctuary is named.

A golden diagonal ladder crosses the shield and signifies the ladder uniting heaven and earth that Jacob saw in his dream.

The external elements of the arms are the Papal canopy or umbraculum and crossed keys that show the dignity of Minor Basilica granted by Pope Pius XI to the sanctuary.

In medieval times, the umbraculum was part of the Papal insignia and used to provide shade for the pope when outside.

Its colours are striped gold and red, the medieval colours of the Roman Pontiff.

As originally basilicas were meant to be churches for Papal liturgy, they were equipped with this item for welcoming the pope whenever he visited. It is for this reason that among other meanings it became a symbol for churches with the title of basilica. The crossed keys represent the Petrine Ministry of the pope.

The motto chosen is the Latin word Veni (Come), which is a translation of the calling that Carmela Grima heard coming from the chapel in 1883.