The Superintendence of Cultural Heritage has halted works near the Wignacourt Aqueduct in Balzan over concerns about potential damage to the 400-year-old structure.

Heavy machinery has been carrying out roadworks at the site in recent days.

The works are being carried out on Infrastructure Malta’s instruction and form part of the Central Link project.

On Wednesday, citizens raised the alarm after pictures showing an excavator digging close to the aqueducts and appearing to uncover parts of the underground portion of the structures appeared online.

“The Superintendence has instructed the contractor to halt works until a site visit could be carried out in order to assess the situation," the watchdog said.

It said its officers inspected the site are currently directing the architects responsible for works on "how to proceed to safeguard all parts of the aqueduct". 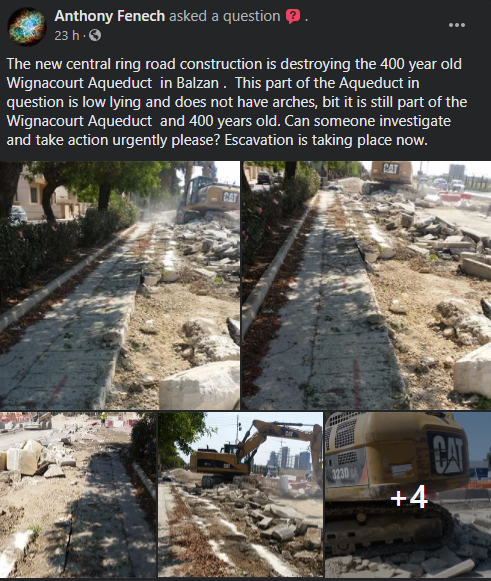 Built by the Order of St John in the 17 century, the aqueducts carried water from natural springs in Dingli and Rabat to Valletta through a series of underground pipes and arched viaducts.

They were named after Grandmaster Alof de Wignacourt, who partially financed them.  Inaugurated in 1615, most of the arches are still intact today and can be seen in Attard, Balzan, Birkirkara and Santa Venera.

Lawyer Claire Bonello said that when NGO’s mounted appeals against the Central Link project, one of the concerns presented had been the proximity of works to the Grade 1 Scheduled Wignacourt Aqueduct.

In response to a request for clarification on this matter, the applicant had filed a declaration on promising that works would be kept a safe distance away from the aqueducts.

The architect of the project, Robert Zerafa, promised the works would be kept at a safe distance away from the aqueduct to "preserve the condition and stability of such structure".

He promised to cordon off the aqueducts during the works, "with secure and stable hoarding, to ensure that all construction machinery and work operations, do not damage in any way, this important part of our cultural heritage." The declaration is available for viewing under application PA 9890/17.

Writing to the SCH on behalf of the appellants, Bonello asked the heritage monitor to intervene and ensure that no damage was occurring on site.

“It now transpires that works are not being kept at a safe distance, there is no cordoning off or visible safety precautions being taken. We fail to understand how this important aqueduct is being left to the ravages of Infrastructure Malta, whilst other authorities seem to turn a blind eye,” Bonello wrote.

“If a Grade 1 monument cannot be preserved, what hope is there for anything?”

A spokesperson for Infrastructure Malta said the photos shared on social media showed the “cleaning” of the area and that no harm had come to the aqueducts as a result.

“The photos show the cleaning of the area next to the blocks forming part of the aqueduct’s structure. None of the aqueduct structures will be damaged, destroyed or relocated. They will remain where they are, with a pre-existing landscaping strip on one side, and the rebuilt road (Mdina Road) on the other,” he said.

“The partially buried aqueduct blocks shown in the photos will remain as they are now, forming part of the footpath. The works being carried out next to the aqueduct are required as part of the road’s reconstruction, which will be built at a higher level as part of this route’s new design for increased safety, in line with applicable permits.”

He said all works next to historical sites or those of potential historical importance are carried out under the supervision of archaeologists approved by the Superintendence of Cultural Heritage.