* Two hijackers on board claimed to have hand grenade

All hostages have been released following a hijack drama at Malta International Airport.

At 3.20pm, the hijackers were seen leaving the plane and surrendering to soldiers following an almost four-hour standoff.

The Afriqiyah Airways A320 with around 120 people on board landed in Malta after it was hijacked in Libyan airspace.

The plane was on an internal flight from Sebha to Tripoli when it was diverted by two hijackers, believed to be in their mid 20s, who threatened to blow up the plane. They were later found to have used fake weapons.

A total of 111 passengers - 82 men, 28 women and an infant - and six crew members were on board the aircraft which landed in Malta at 11.32am. All passengers are believed to be Libyan.

The updates were provided by Prime Minister Joseph Muscat who posted tweets about the ongoing drama.

A Libyan security official told Reuters that the pilot told Tripoli Airport Control before communications were lost that the pilot tried to land in Libya but the hijackers refused.

A statement from Afriqiyah Airways this evening said the hijackers refused the
proposal from the pilot to land the aircraft in Tripoli and negotiate there.

Subsequently a decision was taken to land the aircraft in Malta because of fuel
limitations.

Soldiers and emergency services surrounded the aircraft as soon as it landed in Malta.

First group of passengers, consisting of women and children, being released now.

The hijackers, later named as Suhaha Mussa and Ahmed Alid, claiming to be from a pro-Gaddafi group, had said they were willing to let all passengers go apart from the crew, if their demands were met.

It is still not known what were their demands though as the drama unfolded it appeared to be result of the bitter Libyan political feud rather than an act of terrorism. One German report said they were demanding the release of Saif Gaddafi. 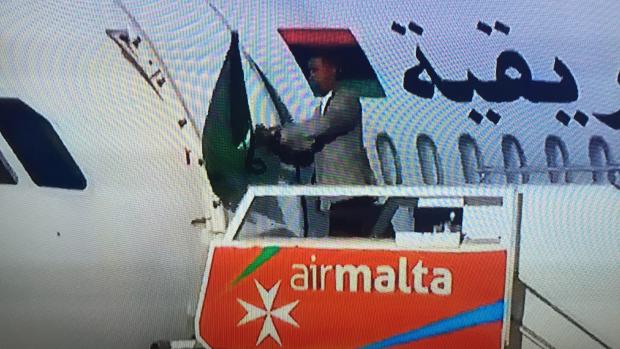 TV footage showed the suspected hijacker carrying the green flag outside the plane.

The claim was reinforced at 2.50pm when one of the hijackers was seen at the aircraft door waving the former green Libya flag. Reuters reported that the hijacker had told Libyan TV he is the head of the "pro-Gaddafi party".

But a Libyan minister was later quoted as saying that the two hijackers were seeking political asylum in Malta, a claim later rejected by Dr Muscat.

A gangway was seen being taken towards the plane at 1.45pm and an aircraft door was opened disembarking women and children first. The first coachload of people was taken towards Lufthansa Technik before the rest of the passengers followed shortly after.

The disembarkation happened calmly, including the moments when the hijackers were seen leaving the aircraft, one of them holding the former green Libya flag. 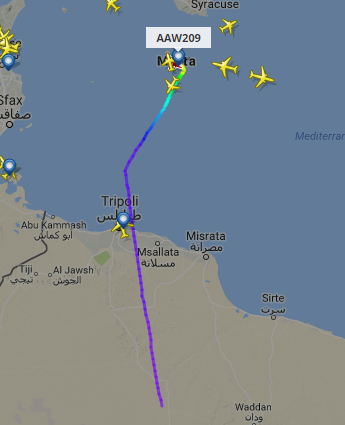 The head of communications at the Prime Minister's office, Kurt Farrugia, tweeted at 1.15pm that Dr Muscat had spoken to Libyan Prime Minister Faez al Serraj.

International media reported that the Libyan transport minister was at one point negotiating with the hijackers. From the Maltese side, AFM commander Jeffrey Curmi was put at the head of negotiations.

While thanking all those involved in the operation, the Nationalist Opposition said every effort should be made to avoid a repetition of a similar incident.

The passengers on board the flight departed Malta early this morning on another aircraft leased by the same airline.

At 1.15pm passengers were informed that all flights were delayed and flights that had been diverted to Sicily started returning to Malta.

At 12.30pm, nine flights had already been diverted to Catania. Hundreds of passengers are believed to be waiting at the airport departures lounge in Malta as well as in airports in Sicily. 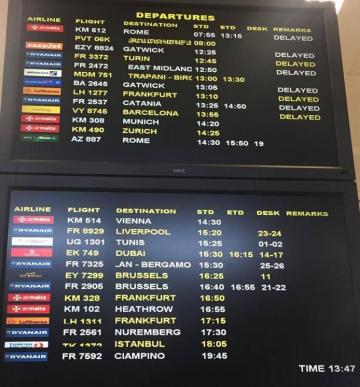 Afriqiyah Airways operates from Sebha to Tripoli on Friday, leaving at 10.10am and arriving at 11.20am.

It operates another flight on Tuesdays.

This evening, MIA said that airport operations will fully recover by the end of this evening.

By 6pm, a total of three outgoing flights remain delayed and as a reaction to the disruption this afternoon, seven incoming flights are expected later on this evening.

The aerodrome was closed for under 30 minutes with a total of 44 flights affected. Nine incoming flights which were diverted, while delays were registered across 20 departing flights and 15 arrivals.

"Malta International Airport would also like to express its satisfaction at the emergency response teams’ reaction to today’s unfortunate events. Our topmost priority was to maintain our safety and security standards across the airport campus, and safeguard our passengers and colleagues at all times."

First major hijack in Malta since 1985

The last major hijack incident in Malta took place in November 23, 1985 when an EgyptAir Boeing 737 plane was diverted to the island.

What followed was a 24-hour nightmare that ended in a bloody massacre with 62 people dead when Egyptian commandos stormed the plane. Only one of the three hijackers survived and was brought to justice.

Forty-three years ago then Prime Minster Dom Mintoff managed to negotiate the release of 247 passengers and eight air hostesses on board a Boeing 747 Jumbo Jet which was also hijacked over Iraq and flown to Malta.

The passengers and air hostesses were released in return for fuel. The plane had been hijacked by Palestinian terrorists. The plane later left Malta and the hijackers eventually surrendered.