Updated at 2.30pm with MGA statement 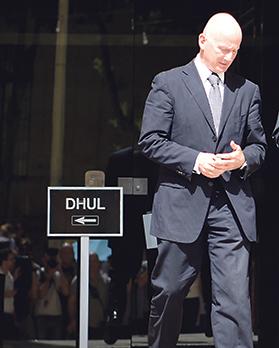 Adrian Hillman leaves court recently in connection with one of the magisterial inquiries into alleged kickbacks and money laundering between him and Keith Schembri. Photo: Chris Sant Fournier

Disgraced former Allied Newspapers managing director Adrian Hillman was given a government consultancy job at the Malta Gaming Authority two weeks after Labour was returned to power last June, The Sunday Times of Malta has learnt.

Mr Hillman, who is facing several magisterial inquiries over alleged kickbacks and money-laundering activities between him and the Prime Minister’s chief of staff, Keith Schembri, was given an annual €48,000 direct order contract by MGA executive chairman Joseph Cuschieri.

Mr Hillman’s lucrative consultancy, according to the Government Gazette, consists of giving advice on strategic public relations and communications.

The MGA already employs a number of officers in this area.

MGA sources told this newspaper Mr Hillman was seen inside Mr Cuschieri’s office just a few days after Labour’s success at the polls, fuelling speculation that he was about to be given an appointment at the MGA.

When asked to confirm Mr Hillman’s job, a spokesman for Mr Cuschieri officially told this newspaper, on June 21, that this was not true. “Mr Hillman is not doing any work or consultancy with the MGA,” the spokesman insisted.

His engagement was requested upon the direct intervention of OPM officials

It now results that at the time of the MGA’s official denial, Mr Hillman had already signed up and been put on the payroll.

Following the last election, the MGA started forming part of the ministerial portfolio of the OPM and receives political direction from Castille.

This is the second appointment for the disgraced former managing director. A few weeks ago, this newspaper revealed Mr Hillman had been appointed to the Board of Trustees of the struggling American University of Malta.

There too, his appointment was made on the recommendation of senior officials at the OPM.

In early 2016, following the leaks of the Panama Papers, Mr Hillman was put on forced leave and later resigned from all positons within the Allied Group.

The Panama Papers had revealed that Mr Hillman owned a secret company in the British Virgin Islands – a tax haven – similar to the ones opened in Panama by Nexia BT’s Brian Tonna for Keith Schembri, the Prime Minister’s chief of staff, and for Cabinet Minister Konrad Mizzi.

Later, leaked investigative reports from the Financial Intelligence Analysis Unit (FIAU) uncovered a series of transactions – for some €650,000 – between Mr Schembri and Mr Hillman going back to 2011. Transactions were made during the period Mr Hillman was entrusted with building a state-of-the-art printing press in Mrieħel for Progress Press. Kasco – the group owned by Mr Schembri – had won a tender to supply the multimillion-euro machinery and equipment for the new press.

The alleged kickbacks continued when Mr Schembri took up his position as Joseph Muscat’s right hand man at Castille.

Despite that the FIAU passed on the reports to the police after finding “reasonable suspicion of money laundering and proceeds of crime”, the police did not investigate and took no initiative.

However, following a legal challenge by then Nationalist Party leader Simon Busuttil, Mr Hillman and Mr Schembri are now subject to criminal inquiries.

None of the ongoing inquiries is known to have been terminated yet. Both Mr Hillman and Mr Schembri deny any kickbacks or money laundering.

Mr Schembri has said that he transferred €650,000 to Mr Hillman as payment for work the latter had done for him. As managing director of Allied Newspapers, Mr Hillman was not permitted to work for third parties.

In a statement this afternoon, the MGA said it engaged Mr Hillman with effect from July 3. His contract was signed on June 28 after all the relevant approvals were received in line with public procurement procedures.

The MGA said it did not receive any instructions whatsoever from the Office of the Prime Minister to engage Mr Hillman and any suggestions to this effect were speculative and untrue.