Goalkeeper Andrew Hogg hopes that Malta will channel their disappointment at their last-gasp defeat to Luxembourg into a tenacious performance in the friendly match against Finland at the Gloria Sports Arena in Belek on Monday.

The Maltese team saw their boid efforts undone by a stoppage-time goal in Thursday’s friendly against Luxembourg at the National Stadium but Hogg prefers to focus on the positives.

“We need to focus on the positives,” Hogg told www.mfa.com.mt.

“Conceding a very late goal was very disappointing but we need learn from the negative aspects and move on. We are now concentrating on the Finland friendly and everyone is looking forward to it.”

The friendlies against Luxembourg and Finland are part of Malta’s build-up for the inaugural UEFA Nations League.

Malta will face Azerbaijan, Faroe Islands and Kosovo with two group matches played in the space of three days every month between September and November.

“This is a useful test for us... these friendlies are important for our preparations for the UEFA Nations League,” Hogg said. 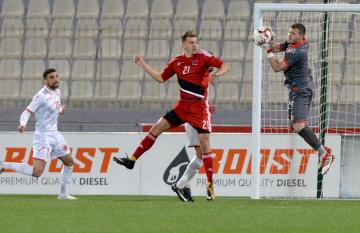 “They give us the opportunity to gauge ourselves against opponents of a similar level to those we’re going to face in this competition.”

Hogg is optimistic that Malta can produce an improved performance against Finland on Monday.

“I’m optimistic that we can have a better performance against Finland, we tend to play better in the second match when we have a double header,” the Hibernians goalkeeper said.

“Probably it’s because we adapt better to the rhythm and tempo of international football after the first game.

“We also need to keep in mind that these are friendlies and I assume that the coach will be trying some new things.

“The performance is important but we also want to obtain a positive result.”

All the players took part in the first part of the session which was led by Luca Pagani, Malta’s physical trainer.

The players who started Thursday’s friendly then had a recovery session in the hotel’s sports centre while the other members of the squad continued to train on the pitch under the supervision of national coach Tom Saintfiet, assistant Ray Farrugia and goalkeepers’ coach Charles Sciberras.

Defender Jean Borg joined up with his international team-mates at their Belek hotel on Saturday evening after being recalled to the squad following Zach Muscat’s withdrawal due to injury.