As Maria Borg’s first solo exhibition Homebody opens its doors at MUŻA, Lara Zammit discusses with the artist the objects portrayed in her paintings and her treatment of them.

Your paintings are quite evocative, possibly due to their subject matter – objects tend to hold meaning because of whom they belong to. What would you say your paintings evoke?

The paintings can be quite open ended, which is something I embrace. I like creating intrigue, maybe even a bit of frustration. I try to evoke this by providing the viewer with the absence of a context (or a story), yet, at the same time, teasing by giving hints of an interaction with that object – an interaction by a human presence.

The objects you paint seem to be extremely commonplace, such as clothing. Is this part of your reason for painting them? Are you trying to encourage the onlooker to pay closer attention to things that are so common as to go unnoticed?

There are many conscious and some unconscious reasons for why I paint what I paint. I love texture, first and foremost, and I delight in painting challenging textures, like a reflective gar­bage bag, a heavy duvet or creas­ed sheets. In their mundanity, I find these things beautiful, and by painting them, I encourage people to look at them through a different lens. 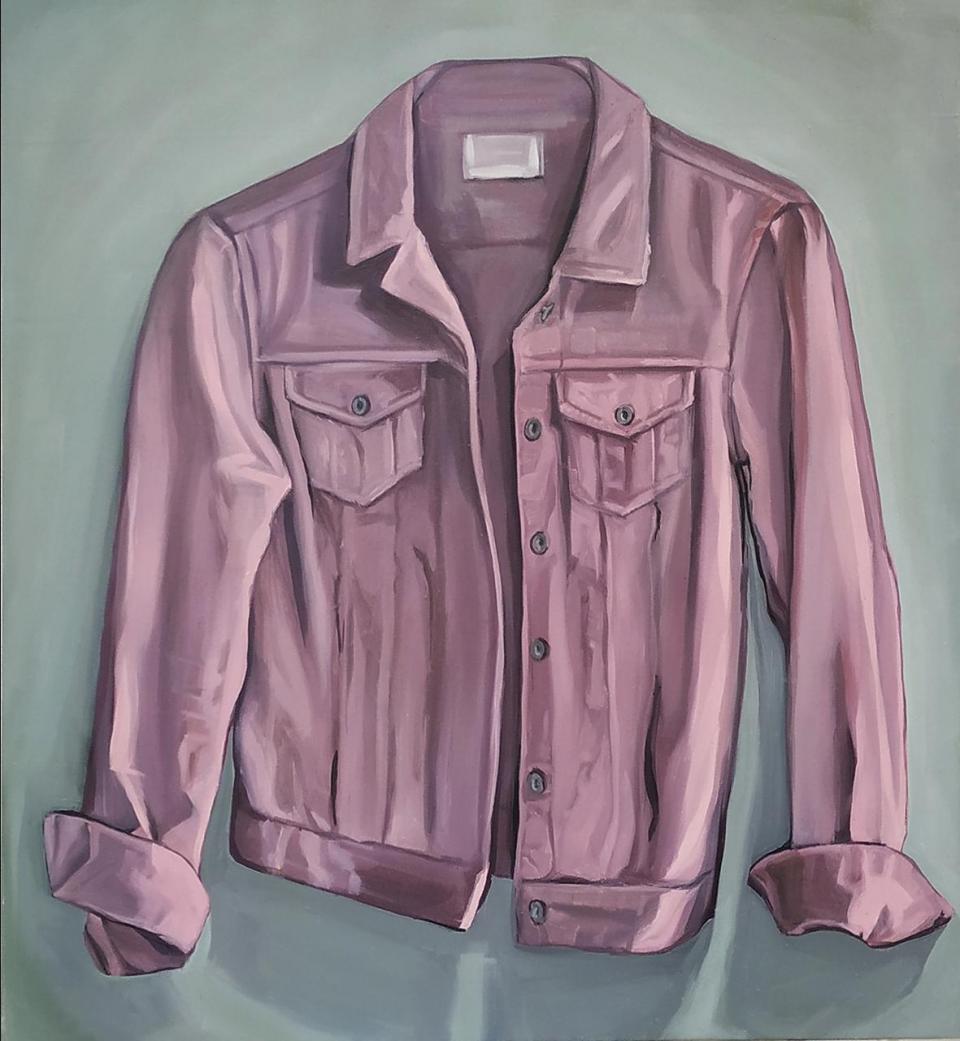 The fact that they are common objects adds to the possibility of other people relating more to them. I feel that this opportunity for others to relate to the artwork is important to me.

Shirts, bras and blankets are objects that reside close to the skin. It’s hard to localise these outside the body without also connecting them to the body. What is the significance of these items in your work? How do these compare to paintings of objects more far removed from the body?

This difficulty of trying to localise these objects as not relating to a body contributes to the aura of intrigue or frustration that I mentioned before. When we look at an image, our mind automatically asks a lot of questions. In the context of my paintings, a painting of an item of clothing begs the question of the item’s importance or the identity of its owner. I like to leave a lot of these unanswered.

The implication of skin is a light teasing from the object’s part. These objects you’ve listed – the clothing and blanket – have an added sensuality to them, whether I meant to instil it in them or not.

In their mundanity, I find these things beautiful

Whether it is clothing, a blanket or a paper bag, they all imply a presence which has interacted with them. This is a connection one can make between all the paintings in Homebody.

However, the sentiments evoked by a bra are very different from those evoked by a full garbage bag. I like the idea of putting these two objects in the same context, juxtaposing them, looking at them as two simple and mundane objects. Both deserve the same attention as the subject for a still life.

These paintings have been six years in the making. How have you as an artist changed across this span of time, and how has this affected your paintings?

I’ve changed a lot as a person during these six years, which in turn changed me a lot as an artist. I’m happy to say that I am much more consistent with my painting practice these days, mostly because I have a painting studio in which to work and a relatively stable financial and employment situation. 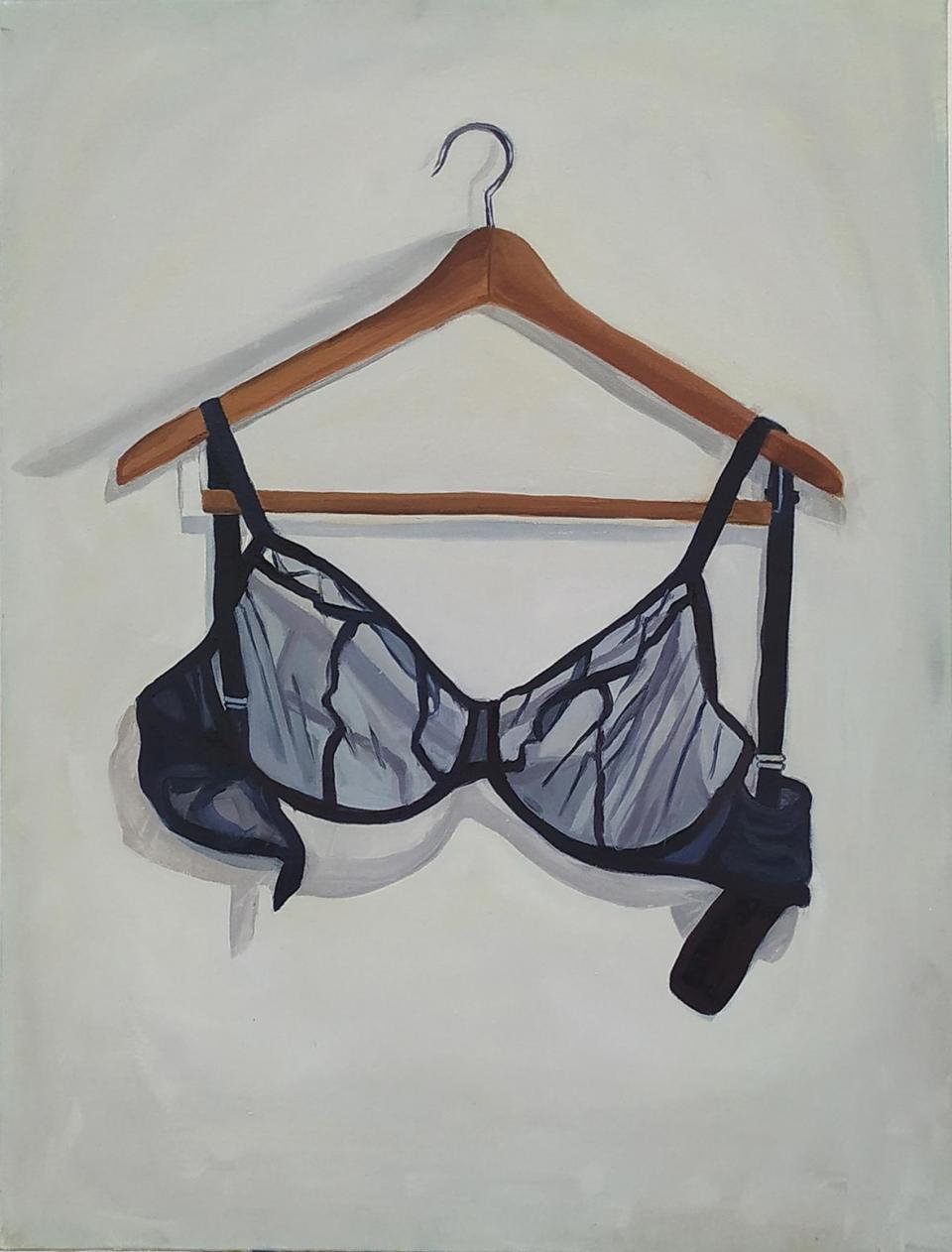 These facts might sound trivial in the artistic and creative context but make a whole world of difference to the amount of work I can produce and how tranquil I am about being able to complete projects. The studio practice has become very important to me ever since I started working in my current studio in Birkirkara.

You say that you started work on these paintings at a residency in a remote part of Scotland. Has this remoteness infiltrated your paintings in any way? Are these disembodied items reminiscent of the remoteness of your location at the time?

I would say yes to both. The environment in which I was living affected me in many ways. It was a lonely time for me. The surroundings were beautiful, but I was physically alone for a lot of the time I spent there. I was away from home for a long period of time for the first time in my life.

It was a highly sentimental and reflective time in my life. I look back at it as a turning point for me as a painter and as a person. Maybe back then I wouldn’t have made this connection, but looking back, I see that the abundance of grey and the cold colours of Scotland found their way into my paintings.

Prior to the Scotland residency, I used more chiaro­scuro and more of a ‘staged drama’ – dark backgrounds and a direct light pointed at my still life objects. During my residency, I started painting objects illuminated by unforgiving studio lighting, thrown on the floor, there as they are and as I saw them.

Jim Dine’s pop treatment of garments, Piero Pizzi Cannella’s evanescence of the mundane and Domenico Gnoli’s obsessive attention to fabric detail are three different representations of similar subject matter. Does your work relate to the work of these artists in any way? Or does it relate more to the work of artists like Tracey Emin and Sarah Lucas?

An artist who comes to mind when discussing mundane, everyday objects, who I admire immensely, is Avigdor Arikha.

His still lifes, especially the ones which contain clothing, have a quiet drama to them and a similar sense of presence and absence that I strive to achieve in my work. I’ve always and probably always will look up to Lucian Freud’s impeccable painting technique, especially the masterful way he gives weight to his subject, be it human or object.

But to answer your question, I feel that I relate to the tradition of painting more than any other medium. As much as I admire Tracy Emin’s and Sarah Lucas’ work, I feel that I am first and foremost a painter and I will always be a painter.

I find Gnoli’s work very captivating. I do relate to his obsession with patterned materials, especially in my latest work, and his mundane and domestic choice of subjects in my work for Homebody.

Homebody is showing at MUŻA between January 22 and February 23.