A Maltese couple and their four-year-old daughter on holiday in Indonesia were left petrified after an earthquake hit the archipelago on Sunday.

The 6.9 magnitude earthquake – which has left rescuers sweeping through collapsed buildings and rubble in search of survivors – has killed more than 130 people and drove thousands of tourists to leave.

The couple, Steve and Zanna Mercieca, were staying in a villa in the village of Ubud in Bali for their honeymoon, which was delayed last year after Mr Mercieca broke his neck and had to spend four months in hospital. 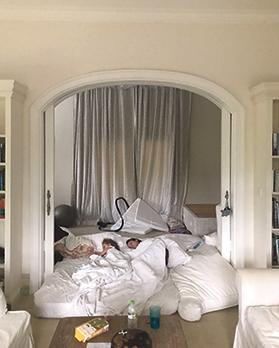 After the quake, the family slept under an arch for protection.

“We were cooking dinner and my wife had just arrived from a yoga session. Suddenly we heard a huge rumbling and the doors and windows started shaking,” Mr Mercieca said.

The couple and their daughter then bolted for the front door and stood outside as their villa swayed with the tremors.

“We felt helpless. The sound was so intimidating and we had no idea when it was going to stop,” he said.

The family spent the night on a mattress under an arch in the main part of the house as protection from further tremors.

Their four-year-old daughter, India, took time to get over the shock, with Mr Mercieca admitting the girl needed constant physical reassurance afterward. “She is still scared and keeps telling us not to let the house shake,” Mr Mercieca said.

The entire family remains terrified of the incident, with Mr Mercieca admitting that they are “constantly expecting another earthquake”.

They have also experienced a few aftershocks, with the latest having come on Tuesday night, Mr Mercieca added.

“The village suffered a few collapsed roofs and fallen trees, but everyone is okay. Unfortunately Lombok and Bali centre were hit much harder,” he said.

Indonesia sits on the Pacific Ring of Fire and is regularly hit by earthquakes. In 2004, the Indian Ocean tsunami killed 226,000 people in 13 countries, including more than 120,000 in Indonesia.