Only a small percentage of Maltese rent from the open market and are therefore susceptible to increasing rental prices, according to Central Bank of Malta data.

However, this situation would change if the pre-1995 controlled rent agreements were ever thrown out.

The burgeoning rental market and its impact on the Maltese has been the topic of many articles. But insight provided by the bank’s chief economist, Aaron Grech, shows a much more nuanced situation, with some trends, such as tourism, playing an as-yet underestimated role.

Dr Grech used statistical data to break down this important sector, isolating those who rent under the pre-1995 controlled rents, those Maltese who rent from the market at commercial rents, the impact on foreign workers and the demand driven by tourists seeking private accommodation.

Many protected by controlled rents

Surveys by the National Statistics Office show that a fifth of the Maltese rent and the rest are home owners.

However, of those, the great majority rent under the old regime, with only three to four per cent of the 200,000 or so households in Malta subject to commercial rents.

The NSO also checks how much people spend on housing (including electricity, for example) compared to their income, with 40 per cent being the maximum threshold considered sustainable from a risk-of-poverty point of view.

Very few people who are in controlled rental properties would reach that level, Dr Grech confirmed.

The percentage spent on housing by those who rent from the market has increased slightly, the data shows. However, he cautioned that the numbers of people affected are small.

Of course, the situation would need to be looked at quite differently if pre-1995 contracts were abandoned as a result of judgments by the European Court of Human Rights, which found them to be unfair. In a worst-case scenario, were the contracts to be struck down without any buffer, this would result in tens of thousands who would have to switch to commercial rents.

Would they be able to afford them? As Dr Grech said, that is another story, and one for which little data is available.

What about those Maltese who aspire to own their own home? Certainly, current home owners are in a very positive position at the moment, given low interest rates. And Dr Grech stressed that official statistics show the proportion of Maltese who are becoming home owners is going up, despite the increase in property prices.

However, people might be getting squeezed out of the type of property they would have aspired to in the past.

Three to four per cent of the 200,000 or so households in Malta are subject to commercial rents

“Whereas in the past, most of the stock was houses, now most of the new units are flats. So you could argue that people are having to shift to different types of accommodation. That said, it is difficult to see if that implies a lower quality of housing as some of the apartments are very high standard,” Dr Grech explained.

The Central Bank does not dismiss these thwarted expectations, with an increasing body of literature in Europe showing that this is what feeds into populism.

“In Malta, it is still considered to be a downgrade to go to a flat, especially if your parents had lived in a house, which makes you bitter,” Central Bank Governor Mario Vella remarked.

Fortunately, the outlook in Malta has remained positive overall as people have been able to get a job easily, and jobs that pay better, with Maltese shifting up the employment categories – leaving gaps in the elementary occupations and those classified as unskilled, which have had to be filled by foreign workers.

“This is what might have created this idea of a squeeze in the rental market as before that part of the property market was just for the Maltese,” Dr Grech added.

Even though the numbers of Maltese renting from the market may be low, everyone who ends up being squeezed to pay a higher rent represents a human story. The Central Bank has a new social research unit which is anxious to get beyond numbers.

However, statistics do flag up important trends, such as whether rising rents are pushing people out of their homes.

Dr Grech had to shrug helplessly once again: the nature of homelessness makes the collection of data rather sketchy. He said evidence showed that the number of those going to homeless shelters was increasing somewhat, but digging deeper one found it was mainly foreign workers and not locals who simply could not find affordable accommodation.

And the overall number thankfully remained very low when one considered that the island had seen an increase of around 40,000 foreigners in four years, he added.

The price for rental properties depends on the balance between supply and demand. Dr Grech admitted that one thing being overlooked was how the island had managed to accommodate foreigners when the housing stock was what it was.

“We started to build when the demand became obvious but it did take a few years till the new properties came online,” he said.

What saved the island was the stock of vacant properties from the previous boom which helped to accommodate the influx. 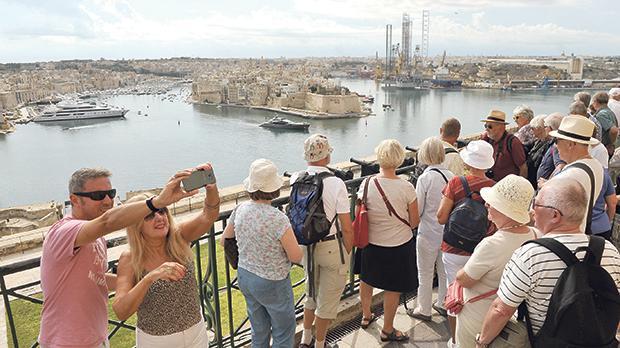 The tourist population is growing – with a huge increase in those using private accommodation. Photo: Chris Sant Fournier

However, to say that demand for rental property is only coming from foreign workers and residents ignores one other important reality: tourism.

The tourist population is growing – with a huge increase, even relatively speaking, in those using private accommodation.

Last year, of the 2.6 million arrivals, 0.3 million went into accommodation that was not rented, either staying with friends or in their own property, and a further 0.6 million were in short-term rentals.

“That means one million people in a year who are not staying in hotels – representing eight million nights. This works out to having the equivalent of 150,000 more people on the island each and every day,” he said.

“If this double-digit growth continues – and they continue to shift to private accommodation – then demand for property will continue to grow.

“We have gone from 1.5 million arrivals to 2.5 million in five years, whereas it had taken us 20 years before that to increase by a million,” he pointed out.

Tourism may continue to grow but what about foreign workers once the economy slows down? Dr Grech shook his head in dismay at the misleading assumptions being made: “We would only need fewer workers if the economy started to decline. No one is arguing that the economy will decline, only that it will slow down to two to three per cent [growth].

“The Maltese population is what it is and will not grow. We are an aging population and the female participation rate has caught up (although we will soon face a caring crisis – as we cannot assume that the government will continue to create places for people to go into institutional care). If we are going to grow – even by one to two per cent – we still need them,” he stressed.

Workers who stay here for a few years clearly have different needs to those who come here for a project. There was an uproar last week over whether Turkish workers coming to Malta for a construction project should be housed in pre-fabricated units.

Prime Minister Joseph Muscat has said that they should definitely “not be housed in tents” but the Malta Chamber of Commerce, Enterprise and Industry warned against building to cater for foreign workers, as these properties might be left vacant once the economy slows down.

However, the problem is not only one to contemplate as a long-term issue: from an economic point of view, does it make sense to put them into a housing stock that is already under pressure?

Dr Vella interjected that it was quite common, from Europe to the Middle East and beyond, for projects which require shift work to be centred around gated communities set up from scratch and dismantled afterwards. He reassured that this was a pragmatic and efficient solution, and that the lack of familiarity with such solutions may raise the fear that the accommodation was cheap or bad.

“It is not,” he said emphatically.

▪ Four-fifths of the Maltese own their own home, one fifth rent.

▪ Three to four per cent of all households pay commercial rents; majority have controlled rents.

▪ Tourists in non-hotel accommodation add 150,000 to the population every day.