Art historian Theresa Vella was researching for a book when she spotted a painting illus­trated within a watercolour by artist Charles Frederick de Brocktorff depicting the grandiose interior of the Grandmaster’s Palace in Valletta.

She immediately recognised that one of the paintings hanging on the palace wall, as depicted by Brocktorff in the 1820s, was the work of Italian artist Mattia Preti (1613-99).

As she dug deeper, Vella soon learnt the painting was Boethius Consoled by Philosophy.

John Spike, the world leading expert on Preti, had recognised it as one of Preti’s late masterpieces. This was a painting that had mysteriously disappeared from the Valletta palace over a century ago.

“I thought to myself: OK. Deep breath. We’ve got a line of investigation here. This was a rare moment of recognising what left the palace. That discovery was particularly gratifying. It was a very unexpected journey of discovery,” says Vella. She spoke with the hindsight of having worked in Malta’s heritage sector for over 25 years.

Vella had just made a priceless link in Malta’s art history. She connected the dots: Preti’s painting Boethius Consoled by Philosophy ‒ the whereabouts of which were unknown at the time ‒ had been in Malta before it mysteriously disappeared.

I thought to myself: OK. Deep breath. We’ve got a line of investigation here.

This was the first of a series of steps that led to that oil-on-canvas being brought back to Malta last month – after it turned up at Sotheby’s Old Masters Auction in New York, from where the Maltese government bought it for €1.3 million.

“This painting is a marvelous acquisition that raises the quality of the national art collection. But the fact that we could prove it was once in Malta adds more ballast to the argument to bring it back,” she says.

Brocktorff (1775-1850) was granted rare access to the Grandmaster’s Palace – offering the earliest interior views of the palace. As she studied the Brocktorff watercolour collection at the Museum of St John in London, one of them that depicted the interior of the palace’s Pages Room stood out.

“As an art historian with a research interest in collections I had an added interest in the paintings at the palace. The majority I was familiar with, since they are part of the national collection at the National Museum of Fine Arts where I had been curator.

But the Boethius Consoled by Philosophy stood out. From the style you can tell immediately from the watercolour that it was a work by Mattia Preti,” she says. 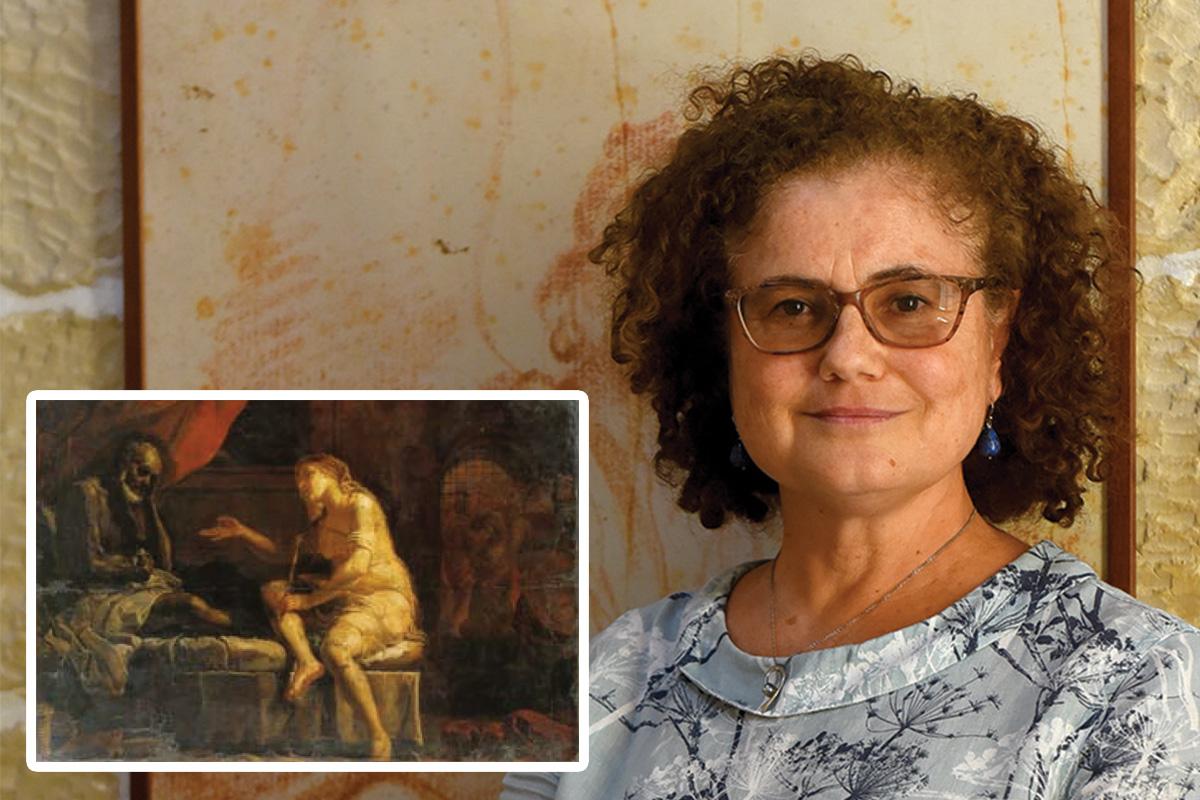 Art historian Theresa Vella made a pivotal discovery in Maltese art history when she spotted the Preti painting (inset) illustrated in a Brocktorff watercolour (above).

The first thing she did was go through the catalogue raisonné by John Spike that lists all the known works of Preti.

In his 1999 catalogue raisonné, Spike listed the painting Boethius Consoled by Philosophy after he came across it in May 1992 during a brief interval when it appeared at auction.

In the book, Spike acknowledges Stephen Degiorgio as the person who flagged the first reference to the painting in a 1714 inventory by Fra Andrea di Giovanni, a knight of the Order of Malta who commissioned it around 1680.

What’s in a name?

“With that action – consoled – you know what’s happening. I hope they restitute the proper title. It will help people understand the painting better,” she says.

So Vella’s 2007 discovery now provided a link between that painting and Malta. But where was the painting?

As long as it’s recognised and protected you believe that, at some point, it will find its proper home.

It seems to have mysteriously disappeared after 1829, until it resurfaced in a private collection in 1992. Then, finally, a breakthrough occurred towards the beginning of this year when lawyer and art collector David Tonna spotted the painting at auction in New York and informed art historian Giovanni Bonello – who alerted the government.

“These are some of the people who work silently in the background to make a difference. This isn’t a field one can work on alone – with art history we’re connecting with people who lived years, decades and even centuries before us.

“Their contribution needs to be recognised because it led to the painting being brought back to Malta,” says Vella.

“When I saw the painting, it was a certain homecoming… As long as it’s recognised and protected you believe that, at some point, it will find its proper home. And in this case, it turned out to be the case.

“When I saw it, I felt very happy on many levels: First I could actually see the painting, finally. But there was a more philosophical satisfaction – that I was able to see connections that take place over many years. Instances like this strengthen the hearts of those involved in research and history of art.”