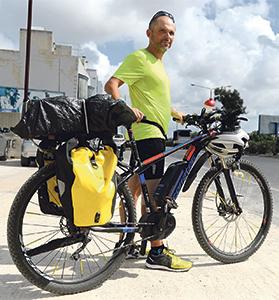 Joseph Farrugia has ditched his car and shed 14 kilos in the process. Photo: Matthew Mirabelli

When the traffic became unbearable, Joseph Farrugia ditched his car, got on a bike for the first time in 36 years, and has not dismounted since.

One year on, he is counting his blessings: quicker commutes, no headaches with parking, disappearing allergies – and a body that’s 14 kilos lighter.

“When I’m talking about the traffic problem my arguments nowadays carry more weight as I’m part of the solution, not the problem,” the 46-year-old told this newspaper on his commute after work.

Mr Farrugia remembers the exact date he started cycling from Marsaxlokk to his workplace in Kirkop: October 17, 2016.

“The last time I had cycled I was still a kid. But at 45, I took the plunge all the way and I think it was a very good idea.”

He now cycles some 200 kilometres every week, commuting to work and beyond for voluntary work.

He does not wear his formal gear to work but changes into a shirt and a tie once he gets to the office. It used to take him 40 minutes to get to Kirkop by car… this is nearly three times the amount of time it now takes him to get there by bike.

“Unless it happens to be a day when there are no cars on the road, I always arrive before my colleagues or friends who drive a car – even if I have to cycle from Ċirkewwa to Marsaxlokk.”

Mr Farrugia also runs errands on his bike, which can transport some 30 kilos worth of groceries. He has even carried large objects – including a rolled up mattress – on his bicycle.

He only rides in a car if he has to transport something extremely large, like a wardrobe, or if he is a passenger.

Mr Farrugia was speaking to this newspaper just as roadworks aimed at easing the flow of traffic near the airport were causing a traffic nightmare on Thursday. Passengers and pilots were being forced to abandon their cars and run to the terminal to catch their flights.

The traffic headache continues to grow from year to year, especially at the beginning of each scholastic year. Just this week, Malta Public Transport general manager Konrad Pule challenged Times Talk viewers to ditch their cars and catch a bus or taxi, walk or cycle.

Commuting by bicycle in fact seems to be on the rise, and Mr Farrugia listed a series of benefits since joining the cycling community. Parking is one of them: he can walk straight into a building with his bike and leave it in the entrance hall.

He has meanwhile become physically stronger and also noticed that his allergies and sinus symptoms have disappeared.

Cycling has also seen Mr Farrugia make new friends, especially through the Bicycling Advocacy Group, which helped him connect with fellow cyclists who provide support about the safest routes, for example.

What about the inconvenience of sweating even before arriving at work?

“You’ll sweat for the first month until your body adjusts. Sweating is no longer an issue, and you can always change into clean shoes once you get to work.”

Mr Farrugia cycles rain or shine. To deal with the August heat he wets his headwear and to protect himself from winter showers he wears a raincoat and plastic overshoes and trousers.

However, the lack of mindfulness among road users remains an issue: “The vast majority of drivers are nice people, but that is not enough. Some nice people aren’t considerate, and they do not do this on purpose. Sometimes they just forget that there are cyclists on the road.

“At times, I’m cycling along the inner lane and cars overtake me safely, however, I seem to suddenly become invisible to them.”

Mr Farrugia has experienced some near misses. But his main fear remains dooring: “I fear that someone will one day open their car door without looking into their side mirror for any approaching cyclists, and with the impact I’m thrown under another vehicle and sliced in two.”