It is probably one of the most damming investigations carried out by the Office of the Ombudsman and its conclusions have been fiercely resisted by the government. His report exposed how the new Labour administration manipulated a promotion exercise to insert trusted people at the top. Ivan Camilleri digs into the findings.

Brigadier Jeffrey Curmi took over command of the Armed Forces of Malta on December 20, 2013, just a few months after Labour was swept into power following more than two decades in Opposition. On the same day, Colonel Mark Mallia was appointed Deputy Commander.

Until the previous September, Mr Curmi and Mr Mallia were majors – middle ranking officers in the AFM.

To become a Brigadier – the highest rank in the Armed Forces of Malta – Curmi needed three promotions. Mallia needed the same. However, many other officers within the upper ranks had more experience and seniority. Some of them filed complaints to the Ombudsman.

The pair’s journey of a thousand miles had begun with a single step:

In May 2013, two months after the election of the new government, Brigadier Martin Xuereb, the then AFM Commander, issued a circular announcing two vacant positions, entailing promotions from Major to Lieutenant Colonel.

In his testimony to the Ombudsman, Brigadier Xuereb said that despite the fact the two positions had become vacant before the 2013 general election, he had felt the process should wait “as it did not make sense to go through a process which will take us to the eve of the election”.

An identical exercise had been carried out in 2011 on the basis of established policy grounded in both written and oral examinations and aimed at limiting, as far as possible, the element of subjectivity. Despite this, the new minister responsible for the army, Manuel Mallia, issued a new policy “totally sweeping away the written complement of the promotion process carried out in 2011,” according to the Ombudsman.

Crucially, the new policy lowered the requirements for those applying for promotion when compared to the 2011 exercise.

No comfort that the selection was done properly

For example, in 2011, only those with 15 years of reckonable army service and at least two years of service as a major could apply. Under the new policy, the latter criterion was lowered to just one year.

“If not for the 2013 seniority change, these criteria would have prevented a number of majors from applying, including Major Mark Mallia who three months after become the AFM’s number two,” the Ombudsman says in the report on his investigation.

The composition of the interviewing board had undergone some drastic changes.

In 2011, the Senior Ranks Appointments Advisory Committee, which examined the applicants, was composed mainly of military staff. This time round Brigadier Xuereb, an ex-uffico member, was the only military man on the newly composed board – Minister Mallia had made an unprecedented departure from protocol by appointing two members of his private secretariat to the committee.

The committee was presided over by the ministry’s permanent secretary Kevin Mahoney, who had no previous experience in a promotion exercise of this nature. He was answerable to the minister.

A total of 24 majors applied for the two vacancies.

All candidates were interviewed over three sessions held during August 2013. Brigadier Xuereb had prepared a dossier on each candidate to serve as an indication of their experience and credentials. However, the Ombudsman found that the marks awarded to the candidates by the majority non-military members of the committee were very different from those awarded by the only army man, Brigadier Xuereb.

The process resulted in the promotion from Major to Lieutenant Colonel of eight of the applicants, when there were meant to have been only two vacant posts.

The top four candidates to emerge from the exercise were Jeffrey Curmi, Mark Mallia, Pierre Vassallo and Mark Said.

The Ombudsman observed that “there seems to have been more promotions than the vacancies warranted”.

Crucially, he concluded: “This investigation does not give this Office the comfort that the selection was done properly.

“Four of the five members of the SRAAC did not have any military knowledge and two of them were persons of trust who were not cognizant of public service protocol, let alone the specific regulation of the Armed Forces. The indications this Office had is that the process was intended to produce a desired outcome.”

The selection process, the Ombudsman said, was conducted in an “unprofessional manner and did not achieve the necessary rigour”.

“It was a process tailor-made to achieve a pre-ordained result. As such it improperly discriminated against the complainants and indeed against all the eligible candidates insofar as they were not allowed to compete on an equal, level playing field with the chosen candidates.

In a letter to the Ombudsman, Home Affairs Minister Michael Farrugia expressed disagreement with the majority of his conclusions but said he would discuss them “at length internally and take them into consideration for future processes”.

Race to the top

September 13, 2013: At the end of the “vitiated” promotion exercise, Major Jeffrey Curmi and Major Mark Mallia were both appointed Lieutenant Colonels. This was the first step in a sprint to the pinnacle of the army.

September 27, 2013: Just 14 days later, the new Lieutenant Colonels, Curmi and Mallia, were given the rank of Colonel by then home affairs minister Manuel Mallia.

October 4, 2013: Through a notification in The Government Gazette, the minister announced that Col. Curmi had been promoted to Deputy Commander of the Armed Forces.

December 20, 2013: Another notification announced the appointment of Col. Curmi to Commander and his promotion to Brigadier – the highest rank in the Maltese army. On the same day, Colonel Mark Mallia was declared to be the AFM’s Deputy Commander.

Mr Mahoney had never sat on a selection board related to the army. When the Permanent Secretary was questioned on this, his answer was that the policy had changed.

He said he had no input in the new policy. He had simply received it from the minster and did not feel that it should be questioned. He could not explain what motivated the change.

When asked whether the policy was formulated by the minister himself, the permanent secretary replied that he thought so.

Ramona Attard, One TV reporter and deputy chief of staff at Home Affairs.

Ms Attard, who had no experience whatsoever in military affairs, thought, according to the Ombudsman, that the law imposed the presence of the Minister’s chief of staff (Silvio Scerri) on the selection board, and that she had been appointed in his absence. The Ombudsman said this was not reflected in the law. She admitted she had been appointed by the minister and that Prime Minster Joseph Muscat had also spoken to her.

On the assessment of communication skills during the interviews, Ms Attard told the Ombudsman that “that was her topic” meaning, presumably, that she could assess whether an army officer could communicate properly with those around him.

Clint Cutajar, canvasser and head of customer services at the ministry.

Mr Cutajar told the Ombudsman that he was not sure who had told him to be a member of the board – it could have been the minister or Mr Scerri.

When asked how he allocated his marks on appearance he replied: “Appearance is his appearance, how he behaves and if he’s clean.”

The Ombudsman said: “Mr Cutajar was out of his depth and he seemed to realise this. He felt he had to obey the minister’s wishes, reinforced by those of the chief of staff, and sit on the board.” 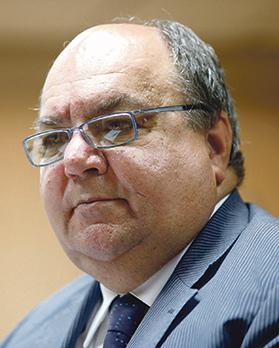 In December 2013, six majors who had applied for the promotion filed a request for an investigation by the Ombudsman claiming the process was flawed.

However, it took three long years for the investigation to start because the government objected to it, arguing that the Ombudsman had no remit to initiate the probe.

The Ombudsman sent letters and held meetings with the minister and the permanent secretary but the government and the army kept ignoring his order to pass on the files related to the promotion exercise.

The Ombudsman was forced to file an unprecedented law suit against the government over the matter and the court eventually found in his favour, ordering the government to give him access to the requested files.