The events which led to today’s report about the Gaffarena deal and the involvement of Parliamentary secretary Michael Falzon were kick-started on May 31, 2015 when The Sunday Times of Malta in a story by Caroline Muscat reported how Mark Gaffarena had made a mint on a property in Valletta.

The newspaper reported how the government paid €1.65 million in cash and land to Mark Gaffarena for his part ownership of a palazzo in Old Mint Street, Valletta.

(See the story at http://www.timesofmalta.com/articles/view/20150531/local/gaffarena-makes-mint-on-property-in-valletta.570313

Mr Gaffarena bought the Valletta property knowing the government intended to expropriate it. The government paid Mr Gaffarena through parcels of land and €516,390 in cash. He made a profit €685,000 in two months.

The parcels of land measured more than 10 football pitches in total. It later resulted that Mr Gaffarena himself had chosen the sites, and Times of Malta disclosed that they were worth much more than the stated value.

It was also revealed that Parliamentary Secretary for Lands Michael Falzon, who enjoyed a close friendship with Mr Gaffarena, had known about the deal well before the expropriation took place.

The government did not approach the other owners of the palazzo.

The case was investigated by the Internal Audit and Investigations Department (IAID) which reportedly declared the dealings to be illegal. It handed its report to the Auditor General.

On June 14 a government spokesman was quoted as saying that the Prime Minister will attempt to reclaim the public assets given to Mark Gaffarena if any wrongdoing is established. 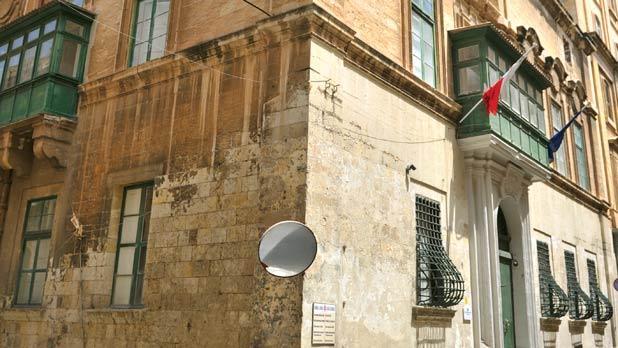 The property in Old Mint Street which was at the heart of the scandal.